Get Your Data into Gephi: A Quick and Basic Tutorial. If you’re interested in learning more about information visualization by trying out some yourself, here’s a quick tutorial on how to get a very basic dataset showing character relationships from a piece of literature into Gephi! 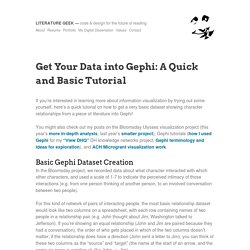 You might also check out my posts on the Bloomsday Ulysses visualization project (this year’s more in-depth analysis, last year’s smaller project), Gephi tutorials (how I used Gephi for my “View DHQ” DH knowledge networks project, Gephi terminology and ideas for exploration), and ACH Microgrant visualization work. Basic Gephi Dataset Creation In the Bloomsday project, we recorded data about what character interacted with which other characters, and used a scale of 1-7 to indicate the perceived intimacy of those interactions (e.g. from one person thinking of another person, to an involved conversation between two people). 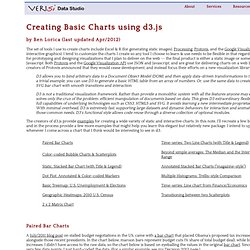 I tend to customize the charts I create so any tool I choose to learn & use needs to be flexible in that regard. I use Processing and R for prototyping and designing visualizations that I plan to deliver on the web -- the final product is either a static image or something done through Javascript. Both Protovis and the Google Visualization API use JSON and Javascript, and are great for delivering charts on a web browser. Recently the creators of Protovis announced that they would cease development, and instead focus their efforts on a new visualization library called d3.js: D3 allows you to bind arbitrary data to a Document Object Model (DOM), and then apply data-driven transformations to the document. 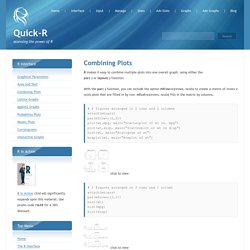 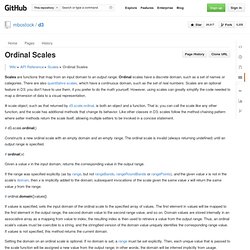 Ordinal scales have a discrete domain, such as a set of names or categories. There are also quantitative scales, which have a continuous domain, such as the set of real numbers. Scales are an optional feature in D3; you don't have to use them, if you prefer to do the math yourself. However, using scales can greatly simplify the code needed to map a dimension of data to a visual representation. A scale object, such as that returned by d3.scale.ordinal, is both an object and a function. 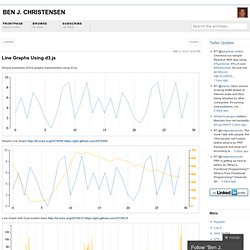 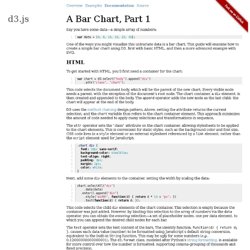 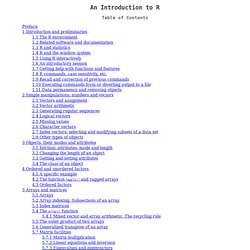 This manual is for R, version 3.1.0 (2014-04-10). Copyright © 1990 W. Permission is granted to make and distribute verbatim copies of this manual provided the copyright notice and this permission notice are preserved on all copies. Preface This introduction to R is derived from an original set of notes describing the S and S-PLUS environments written in 1990–2 by Bill Venables and David M. 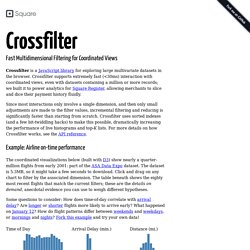 Crossfilter supports extremely fast (<30ms) interaction with coordinated views, even with datasets containing a million or more records; we built it to power analytics for Square Register, allowing merchants to slice and dice their payment history fluidly. Since most interactions only involve a single dimension, and then only small adjustments are made to the filter values, incremental filtering and reducing is significantly faster than starting from scratch. Crossfilter uses sorted indexes (and a few bit-twiddling hacks) to make this possible, dramatically increasing the perfor­mance of live histograms and top-K lists.

For more details on how Crossfilter works, see the API reference. Example: Airline on-time performance. Parallel Coordinates. Parallel coordinates are one of the most famous visualization techniques, and among the most common subjects of academic papers in visualization. While initially confusing, they are a very powerful tool for understanding multi-dimensional numerical datasets. The Technique The usual way of describing parallel coordinates would be to talk about high-dimensional spaces and how the technique lays out coordinate axes in parallel rather than orthogonal to each other. But there’s a much simpler way of looking at it: as the representation of a data table. This one describes car models released from 1970 to 1982, and contains their mileage (MPG), number of cylinders, horsepower, weight, and year they were introduced (among others).

Now imagine each of these columns being mapped onto a vertical axis in the image above. To make some sense out of this, the easiest way is to forget the part about records that span the entire width, and look at the space between each pair of axes. Brushing Limitations. jQuery UI. Mbostock.github.com/d3/talk/20111018/tree.html.