GameDev Tutorials. We are a sound library website for Game Development but we also like to develop our own games, so we set up a full list of tutorials to help game developers. 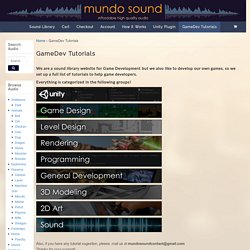 Everything is categorized in the following groups! Also, if you have any tutorial sugestion, please, mail us at mundosoundcontact@gmail.com Thanks for your support! Mundo Sound team. The Last Human Artifacts: A Portal 2 post-mortem. Note: This article includes plentiful spoilers for Portal 2. 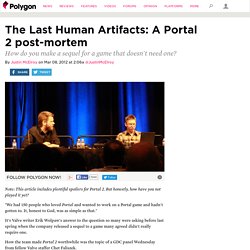 But honestly, how have you not played it yet? Be less distracted. 5 Mistakes I’ve Made as a Game Designer - Dori Adar - Designing Users' Behavior. As a young designer working in a small startup, I’ve had the privilege of making many mistakes with not much harm done. 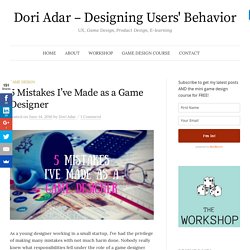 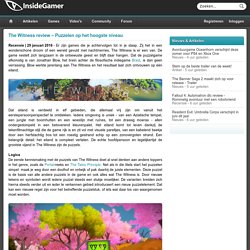 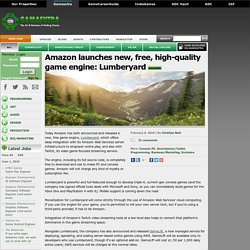 The engine, including its full source code, is completely free to download and use to make PC and console games. Amazon will not charge any kind of royalty or subscription fee. Lumberyard is powerful and full-featured enough to develop triple-A, current-gen console games (and the company has signed official tools deals with Microsoft and Sony, so you can immediately build games for the Xbox One and PlayStation 4 with it). Home — Precious Plastic. Wrestling With The Witness' Most Difficult, Divisive Puzzle. Playing an RPG without combat. I'm bored of killing people. 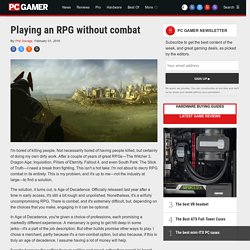 Not necessarily bored of having people killed, but certainly of doing my own dirty work. After a couple of years of great RPGs—The Witcher 3, Dragon Age: Inquisition, Pillars of Eternity, Fallout 4, and even South Park: The Stick of Truth—I need a break from fighting. This isn't a hot take: I'm not about to decry RPG combat in its entirety. This is my problem, and it's up to me—not the industry at large—to find a solution. The solution, it turns out, is Age of Decadence. In Age of Decadence, you're given a choice of professions, each promising a markedly different experience. 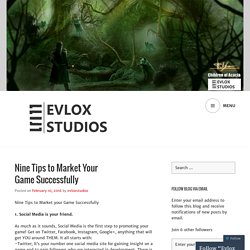 Social Media is your friend. As much as it sounds, Social Media is the first step to promoting your game! Get on Twitter, Facebook, Instagram, Google+, anything that will get YOU around THEM. It all starts with: -Twitter; It’s your number one social media site for gaining insight on a game and to gain followers who are interested in development. The only limit is yourself. 2. People need something to go to when they want to see your work and updates. Koen Deetman's Blog - What Happens When A Very Large Youtuber Features You? The following blog post, unless otherwise noted, was written by a member of Gamasutra’s community. 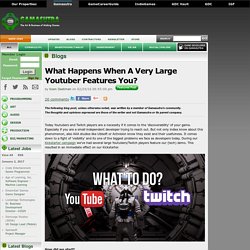 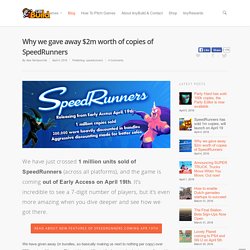 Why do I call them “pirated” copies? Let me explain: We actually leaked a “special” version of SpeedRunners onto ThePirateBay a while back, and watched it spread from there. This PirateBay version was the local multiplayer “Party Mode” version of the game… The same version you can grab for free off Steam. It’s basically a really neat demo. Here’s how it works 4 bots spawn and start playingConnect a controller and you take over control of one of the botsIf you go idle, the bot takes control backMaps auto-rotate This game mode became very popular as it’s ideal for setting up at parties and conventions, and we actively encouraged pirates to download it.

We still have thousands of people who go through the effort to properly pirate the game, but compared to normal piracy levels, it’s a drop in the ocean.