Video Sphere. Video texture. Import. D. Examples. Three.js Examples The goal of this collection is to provide a set of basic and instructive examples that introduce the various features in Three.js. 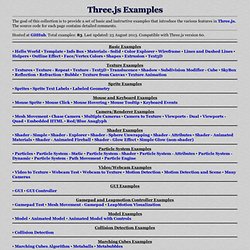 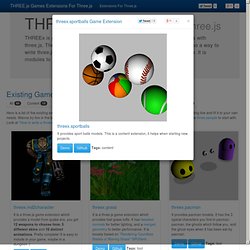 You can fine tune lots of parameters to make it fit your needs. You can choose the fonts, the size, the bevel, the weight etc... Demo Github Tags: content tool. All 109 Examples from my book on Three.js for Three.js version r63. WebGL and Three.js: Texture Mapping. By: Greg Stier Three.js Three.js is a lightweight 3D library that hides a lot of the WebGL complexities and makes it very simple to get started with 3D programming on the web. 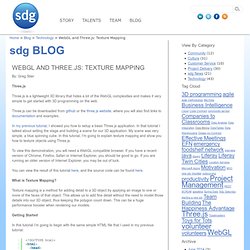 Three.js can be downloaded from github or the three.js website, where you will also find links to documentation and examples. In my previous tutorial, I showed you how to setup a basic Three.js application. In that tutorial I talked about setting the stage and building a scene for our 3D application. To view this demonstration, you will need a WebGL compatible browser. You can view the result of this tutorial here, and the source code can be found here.

What is Texture Mapping? Texture mapping is a method for adding detail to a 3D object by applying an image to one or more of the faces of that object. Getting Started In this tutorial I’m going to begin with the same simple HTML file that I used in my previous tutorial: If you run your application now, you should see a spinning blue cube like the one pictured below. with: [Никита Северинов] WebGL Three.js - Creating Solar System [2012, RUS] Three.js webgl - io - scene loader. All 109 Examples from my book on Three.js for Three.js version r63. Three.js webgl - materials - dynamic cube reflection. Three.js - JavaScript 3D library. +360º - Car Visualizer - Three.js. Фильм WebGL Three.js - Solar System скачать торрент бесплатно. [Никита Северинов] WebGL Three.js - Solar System [2012, RUS] (WebGL) Max to Three.js workflow tips and tricks - Blog - (BKcore) Thibaut Despoulain.

Ever since I started working with the WebGL technology, I've been trying out a few frameworks like SpiderGL and SceneJS. 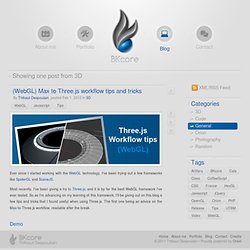 Most recently, I've been giving a try to Three.js, and it is by far the best WebGL framework I've ever tested. So as I'm advancing on my learning of this framework, I'll be giving out on this blog a few tips and tricks that I found useful when using Three.js. The first one being an advice on the Max-to-Three.js workflow, readable after the break. Demo This is what I came up with during my workflow experiment. Context In order to learn more about the Three.js framework I decided to follow a complete modeling to rendering workflow, from 3ds Max to Three.js.

So I quickly started to model a Tron identity disk in Max, the reason being that it is quite a simple geometry yet having some specificities that will be usefull when playing with advanced rendering later, like glow and particles. Modelling So I went on with a quick 2.5k poly mesh using a screenshot as blueprint. Artfolio 3D ArtGallery. Soul Reaper - HTML5 Scroll Book. Three.js Interview: Online 3D Modeling And Rendering With Clara.io. 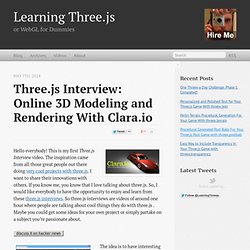 This is my first Three.js Interview video. The inspiration came from all those great people out there doing very cool projects with three.js. I want to share their innovations with others. If you know me, you know that I love talking about three.js. So, I would like everybody to have the opportunity to enjoy and learn from these three.js interviews. Three.js: проблема с наложением текстуры. Three.js - webgl reflection [cars]