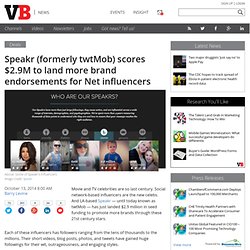 Social network-based influencers are the new celebs. And LA-based Speakr — until today known as twtMob — has just landed $2.9 million in seed funding to promote more brands through these 21st century stars. Each of these influencers has followers ranging from the tens of thousands to the millions. Their short videos, blog posts, photos, and tweets have gained huge followings for their wit, outrageousness, and engaging styles. 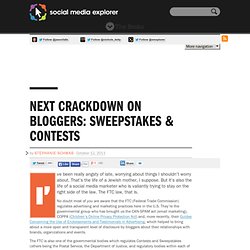 That’s the life of a Jewish mother, I suppose. But it’s also the life of a social media marketer who is valiantly trying to stay on the right side of the law. The FTC law, that is. No doubt most of you are aware that the FTC (Federal Trade Commission) regulates advertising and marketing practices here in the U.S. They’re the governmental group who has brought us the CAN-SPAM act (email marketing), COPPA (Children’s Online Privacy Protection Act) and, more recently, their Guides Concerning the Use of Endorsements and Testimonials in Advertising, which helped to bring about a more open and transparent level of disclosure by bloggers about their relationships with brands, organizations and events.

The FTC is also one of the governmental bodies which regulates Contests and Sweepstakes (others being the Postal Service, the Department of Justice, and regulatory bodies within each of the 50 U.S. states). Interview: Pro Vine Artist Pinot Shares His Tips For Animating On Vine. This week's interview with a Pro Viner features Pinot, who headlined our list of talented #6SECFILMS entrants who weren't eligible to win the competition. 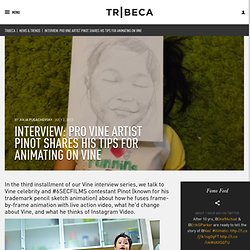 Originally from Indonesia and now living in Kuwait as an illustrator and motion graphic designer, Pinot finds time to make stop motion creations of his own using sketch drawings intertwined with the real world. The husband to a similarly-crafty wife and father to three magical children, he has found that Vine is like a family playground, with his kids being a constant source of inspiration. Tribeca: You clearly have a very strong background in art. At what point did you decide to combine your drawing skills with a digital medium like Vine? And were you actively making videos before Vine? Pinot: I decided to combine the two mediums when I realized I'm not allowed to use pre-recorded footage on Vine. Not Every Channel, The Best Channels. The Fast-Growing, Profitable Market For Kid "Influencer" Endorsements On Twitter, Instagram, Vine, YouTube, And Pinterest.

Who’s getting the better deal here, the new age social media barons, or the brands paying them? 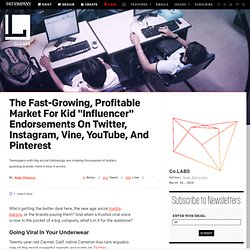 And when a trusted viral voice is now in the pocket of a big company, what’s in it for the audience? Going Viral In Your Underwear Twenty-year-old Carmel, Calif. native Cameron Asa runs arguably one of the most powerful parody accounts on Twitter: TweetLikeAGirI. In a phone conversation he told me so, proudly. And unlike some of his peers he even advertises his rates online. “Some people are content to make $200 to $400 on their accounts [per post],” explains David Orr. Orr won’t reveal just how much he makes, but says “making a thousand dollars a day is by no means unrealistic” for influencers. “It’s great that 16- and 17 year-olds are making $500 a day in revenue, working from 6 p.m. to 9 p.m., after school,” he says. To do that the 22-year-old Illinois native and University of Arizona graduate spends an average of 14 hours a day online, seven days a week. Is influencer marketing over? Here’s another pivot, this time from Wahooly.

By Erin Griffith On May 21, 2013 For a hot minute there, it felt like “influencers,” loosely defined as anyone with a respectable number of Twitter followers, were the future of marketing. 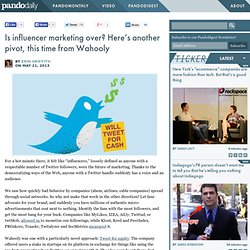 Thanks to the democratizing ways of the Web, anyone with a Twitter handle suddenly has a voice and an audience. We saw how quickly bad behavior by companies (ahem, airlines, cable companies) spread through social networks. So why not make that work in the other direction? Let fans advocate for your brand, and suddenly you have millions of authentic micro-advertisements that cost next to nothing. Actors for Hire in Los Angeles, CA. Overview: Advertise with Townsquare Media, Advertiser Information.

YouTuber 'PewDiePie' Is Making $4 Million A Year. Get in the News with Free HARO Publicity Alerts! - Help a Reporter Out. HARO is your exclusive publicity genie, delivering you 3 free email alerts daily, straight from journalists and media companies on a deadline who want your story and expertise! 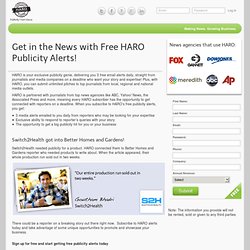 Plus, with HARO, you can submit unlimited pitches to top journalists from local, regional and national media outlets. HARO is partnered with journalists from top news agencies like ABC, Yahoo! News, the Associated Press and more, meaning every HARO subscriber has the opportunity to get connected with reporters on a deadline. When you subscribe to HARO’s free publicity alerts, you get: 3 media alerts emailed to you daily from reporters who may be looking for your expertise Exclusive ability to respond to reporter’s queries with your story The opportunity to get a big publicity hit for you or your business Switch2Health needed publicity for a product.