Coogan's Run - Wikipedia. Episodes[edit] In order of broadcast: Get Calf featured the already well known characters Paul Calf and his sister Pauline (both played by Coogan). 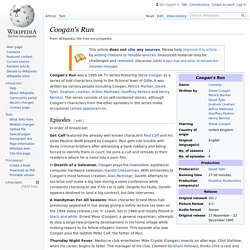 Paul gets into trouble with three criminal brothers after witnessing a bank robbery and being forced to identify them in court. He joins a cult and retreats to their residence where he is lured into a porn film. In Dearth of a Salesman, Coogan plays the insensitive, egotistical computer hardware salesman, Gareth Cheeseman. A Handyman For All Seasons: Main character Ernest Moss had previously appeared in live shows giving a safety lecture (as seen on the 1994 video release Live 'n' Lewd). Thursday Night Fever: Mediocre club entertainer Mike Crystal (Coogan) invents an alter-ego, Clint Stallone, when his career begins to falter. Natural Born Quizzers, featuring the mad, trivia-obsessive brothers Stewart and Guy Crump (Coogan and Patrick Marber). External links[edit] Coogan's Run at the Internet Movie Database. Asylum (BBC TV series) - Wikipedia. The series has yet to be released on DVD. 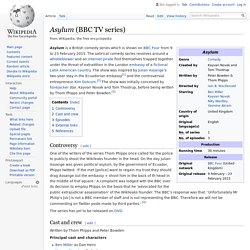 Moving Wallpaper - Wikipedia. The title, "Moving Wallpaper", is a disparaging term applied to uninspiring TV shows, or to television in general, referring to the perception that modern television viewers are "mindless absorbers of images", as if staring at wallpaper.[2] Production[edit] A six-episode second series of Moving Wallpaper was commissioned and began airing on ITV on 28 February 2009, again in the Friday 9 pm slot. 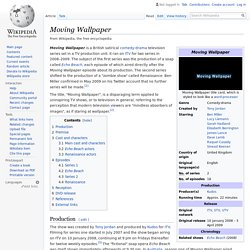 Appropriate Adult - Wikipedia. This article is about the 2011 television series. 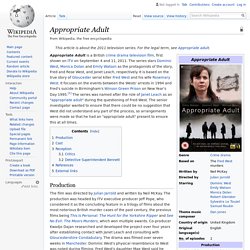 For the legal term, see Appropriate adult. Production. Taxi (TV series) - Wikipedia. The show focuses on the employees of the fictional Sunshine Cab Company, and its principal setting is the company's fleet garage in Manhattan. 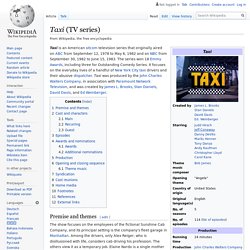 Among the drivers, only Alex Reiger, who is disillusioned with life, considers cab driving his profession. The others view it as a temporary job. Elaine Nardo is a single mother working as a receptionist at an art gallery. Tony Banta is a boxer with a losing record. Bobby Wheeler is a struggling actor. A number of episodes involve a character having an opportunity to realize his or her dream to move up in the world, only to see it yanked away. Learn German Through TV: 8 Great Shows for German Learners. You’ve already read the must-read German classics. 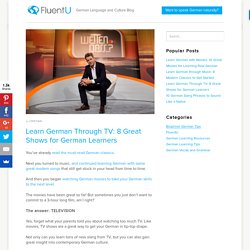 Next you turned to music, and continued learning German with some great modern songs that still get stuck in your head from time to time. And then you began watching German movies to take your German skills to the next level. The movies have been great so far! But sometimes you just don’t want to commit to a 3-hour long film, am I right? The answer: TELEVISION Yes, forget what your parents told you about watching too much TV. Not only can you learn tons of new slang from TV, but you can also gain great insight into contemporary German culture. Lost Highway: The Story of Country Music. The four-part, four-hour documentary travels the Lost Highway and uncovers the story of country music on a journey to the heart of America and the music that has come to define it. 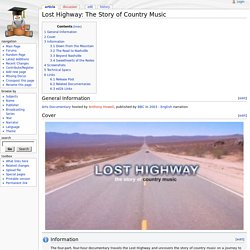 From the makers of the award-winning series Dancing in the Street and Walk On By comes another major heritage music series charting the history of American country music in the words of its greatest performers, producers, musicians and songwriters. Lost Highway will chart the history and growth of country music from its roots in mountain music, through bluegrass to the emergence of Hank Williams and honky tonk, the rise of the pop friendly Nashville Sound, the extraordinary emergence of female performers to positions of dominance in the industry and the success of newer forms of the genre from country rock to alt. country. 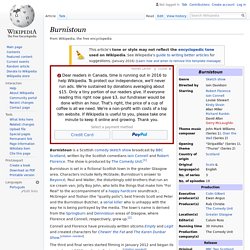 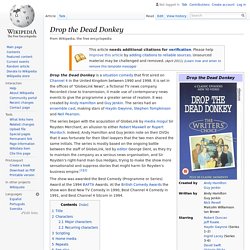 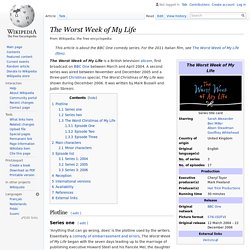 A second series was aired between November and December 2005 and a three-part Christmas special, The Worst Christmas of My Life was shown during December 2006. It was written by Mark Bussell and Justin Sbresni. Plotline[edit] Series one[edit] Hogan's Heroes - Wikipedia. Hogan's Heroes is an American television sitcom set in a German prisoner of war (POW) camp during World War II. It ran for 168 episodes from September 17, 1965 to April 4, 1971 on the CBS network. Criminal Justice (TV series) Criminal Justice is a British television drama series produced by the BBC and first shown in 2008. Written by Peter Moffat, each five-episode series follows the journey of an individual through the justice system and was first broadcast over five successive nights on BBC One. The first series, first shown in 2008, starred Ben Whishaw as Ben Coulter, a young man who is accused of murder after a drunken and drug-filled night out, though is unable to remember committing the crime.

It was directed by Otto Bathurst and Luke Watson. In 2009, the second series featured Maxine Peake as troubled housewife Juliet Miller whose husband was stabbed in their bed. The Thick of It. The series has been described as the 21st century's answer to Yes Minister. It too highlights the struggles and conflicts between politicians, party spin doctors, advisers, civil servants and the media. In similar fashion with Yes Minister, the political parties involved are never mentioned by name, although the context makes clear which is which. Iannucci describes it as "Yes Minister meets Larry Sanders".[3] The journalist and former civil servant Martin Sixsmith is an adviser to the writing team, adding to the realism of some scenes.[3] The series became well known for its profanity and for featuring storylines which have mirrored, or in some cases predicted real-life policies, events or scandals.[4][5][6][7] A feature film spin-off, In the Loop, was released in the UK on 17 April 2009.

He later leaves this position to head up his own firm, Kaan & Associates. In addition to the questionable business practices of Marty and his team, the series also focuses on Marty's personal life. He deals with his disagreeable management consultant ex-wife Monica (Dawn Olivieri), his retired-psychiatrist father Jeremiah (Glynn Turman) and his confidently flamboyant son Roscoe (Donis Leonard, Jr).