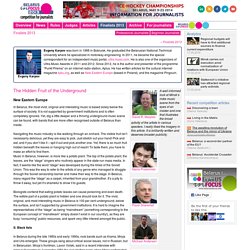 He graduated the Belarusian National Technical University where he specialized in motorway engineering. In 2011, he became the special correspondent for an independent music portal, ultra.music.com. He is also one of the organizers of Ultra-Music Awards in 2011 and 2012. Since 2012, he is the author and presenter of the programme “Punkt Priema” on an internet radio-station, Aplus. David R. New Eastern Europe In Belarus, the most vivid, original and interesting music is based solely below the surface of society. Navigating the music industry is like walking through an orchard. Biologists contend that eating potato leaves can cause poisoning and even death. S: Black lists In Belarus during the late 1980s and early 1990s, rock bands such as Krama, Mroja and Ulis emerged. The disgraced rock bands are always looking for ways out. Yet there are always exceptions. S: National pride?

Translated by Olena Shynkarenko. Belarus in Focus. Times Ain't Like They Used To Be - Early Rural and Popular Music. Freakin' at the Freakers Ball. Track listing[edit] 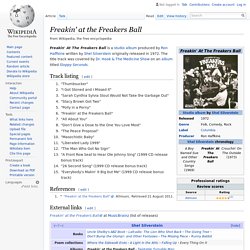 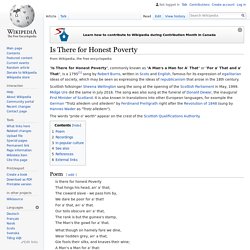 Renowned Scottish folksinger Sheena Wellington sang the song at the opening of the Scottish Parliament in May, 1999. The song was also sung at the funeral of Donald Dewar, the inaugural First Minister of Scotland. It is also known in translations into other European languages, for example the German "Trotz alledem und alledem" by Ferdinand Freiligrath right after the Revolution of 1848 (sung by Hannes Wader as "Trotz alledem"). The words "pride o' worth" appear on the crest of the Scottish Qualifications Authority. Poem[edit] Is there for honest Poverty That hings his head, an' a' that; The coward slave-we pass him by, We dare be poor for a' that!

For a' that, an' a' that. Our toils obscure an' a' that, Stoner Train - No Money, No Home (Single, 2016 / HQ) BT Wi-fi. The Litter. History[edit] Four members of the original lineup, Jim Kane, Bill Strandlof, Denny Waite, and Dan Rinaldi formed from the remains of two popular Minneapolis band's, The Victors and The Tabs, in 1966. 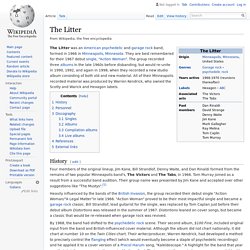 Tom Murray joined as a result from a successful band audition. Their group name was presented by Jim Kane and accepted over other suggestions like "The Mustys".[1] Heavily influenced by the bands of the British Invasion, the group recorded their debut single "Action Woman/"A Legal Matter"in late 1966. "Action Woman" proved to be their most impactful single and became a garage rock classic. By 1968, the band had shifted to the psychedelic rock scene. In 1969, the band finally signed to a major label. The group would continue to tour with several different lineups sporadically thereafter and released an album of new material in 1998. Phases and Stages. Phases and Stages is a 1974 album by Willie Nelson, which followed the moderate success of his first Atlantic Records release, Shotgun Willie. 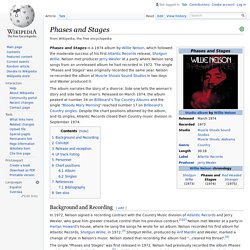 Nelson met producer Jerry Wexler at a party where Nelson sang songs from an unreleased album he had recorded in 1972. The single "Phases and Stages" was originally recorded the same year. Nelson re-recorded the album at Muscle Shoals Sound Studios in two days and Wexler produced it. The album narrates the story of a divorce. Side one tells the woman's story and side two the man's. Background and Recording[edit] In 1972, Nelson signed a recording contract with the Country Music division of Atlantic Records and Jerry Wexler, who gave him greater creative control than his previous contract.[1][2] Nelson met Wexler at a party in Harlan Howard's house, where he sang the songs he wrote for an album. 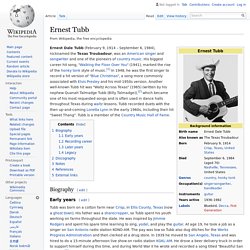 A friendship developed and she was instrumental in getting Tubb a recording contract with RCA. His first two records were unsuccessful. Tubb (3rd from left, back row) at Carnegie Hall in 1947 Tubb joined the Grand Ole Opry in February 1943 and put together his band, the Texas Troubadours.[6] Tubb's first band members were from Gadsden, Alabama. Tubb always surrounded himself with some of Nashville's best musicians. Another Tubb musician was actually his producer, Owen Bradley. The Swing Ding Song - Jojo Effect Song Lyrics.