The Secret History of a Fleeting Pre-Internet Digital Media Channel - Motherboard. Under a side table in the elegant Upper West Side apartment of Ina Saltz, a design professor at the City College of New York, a taped-up box collected dust. 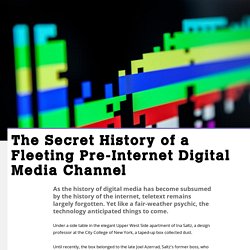 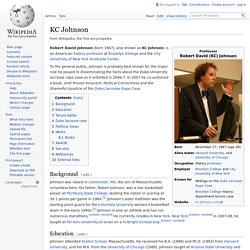 To the general public, Johnson is probably best known for the major role he played in disseminating the facts about the Duke University lacrosse rape case as it unfolded in 2006-7. In 2007 he co-authored a book, Until Proven Innocent: Political Correctness and the Shameful Injustice of the Duke Lacrosse Rape Case. Background[edit] Stephen Spender - Wikipedia. Sir Stephen Harold Spender CBE (28 February 1909 – 16 July 1995) was an English poet, novelist and essayist who concentrated on themes of social injustice and the class struggle in his work. 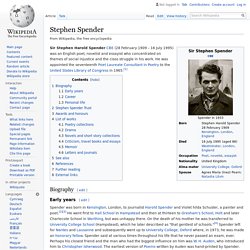 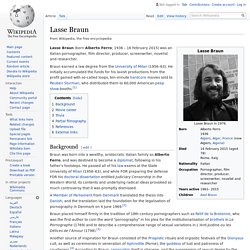 Braun earned a law degree from the University of Milan (1956–63). He initially accumulated the funds for his lavish productions from the profit gained with so-called loops, ten-minute hardcore movies sold to Reuben Sturman, who distributed them to 60,000 American peep show booths.[1] Background[edit] John le Fucker - Wikipedia. John le Fucker was an Englishman who appears in an administrative record of 1278, and who has attracted attention for his unusual surname. 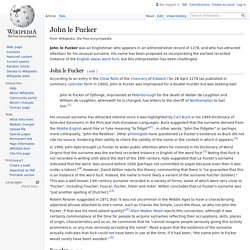 His name has been proposed as incorporating the earliest recorded instance of the English swear word fuck, but this interpretation has been challenged. John le Fucker[edit] John le Fucker of Tythinge, imprisoned at Peterborough for the death of Walter de Leyghton and William de Leyghton, wherewith he is charged, has letters to the sheriff of Northampton to bail him.[1] Roger Fuckebythenavele - Wikipedia. Roger Fuckebythenavele was a 14th-century Englishman who was cited in court records of 1310–11. 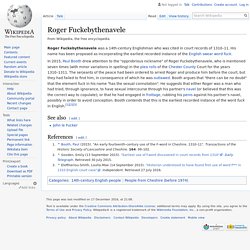 His name has been proposed as incorporating the earliest recorded instance of the English swear word fuck. See also[edit] John le Fucker References[edit] Subbotniks - Wikipedia. The Subbotniks (Russian: Субботники; IPA: [sʊˈbotʲnʲɪkʲɪ], "Sabbatarians") is a common name for Christian sects of Judaizers originating in Russia who split from other Sabbatarians in the 19th century.[1][2] There are three main groups of people described as Subbotniks: Judaizing Talmudists: Subbotnik converts to Rabbinic Judaism, also described as "Gery" (Russian: Геры), "Talmudisty" (Russian: Субботники-Талмудисты), or "Shaposhniki".[1]Karaite Subbotniks (Russian: Субботники-Караимиты): also described as "Russian Karaites" or Karaimits (Russian: Караимиты).,[1][3] considering themselves as adherents of Karaite Judaism.[4] However, it has been reported that they do not practice circumcision.[5]Subbotnik Molokans (Russian: Молокане-субботники) sect: in contradiction to the previous Subbotnik sects they recognize the Gospel, but believe that it is necessary to fulfill exactly all the rules and precepts of the Old Testament.[6] History[edit] Under Alexander I and Nicholas I[edit] 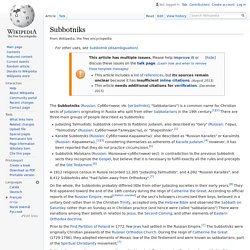 Detecting Text Reuse in Nineteenth-Century Legal Documents – The Backward Glance. How can you track changes in the law of nearly every state in the United States over the course of half a century? 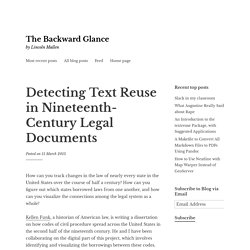 How can you figure out which states borrowed laws from one another, and how can you visualize the connections among the legal system as a whole? Kellen Funk, a historian of American law, is writing a dissertation on how codes of civil procedure spread across the United States in the second half of the nineteenth century. He and I have been collaborating on the digital part of this project, which involves identifying and visualizing the borrowings between these codes. The problem of text reuse is a common one in digital history/humanities projects.

IEEE puts out a first draft guide for how tech can achieve ethical AI design. One of the barriers standing in the way of ethically designed AI systems that benefit humanity as a whole, and avoid the pitfalls of embedded algorithmic biases, is the tech industry’s lack of ownership and responsibility for ethics, according to technical professional association, the IEEE. 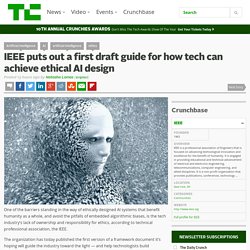 The organization has today published the first version of a framework document it’s hoping will guide the industry toward the light — and help technologists build benevolent and beneficial autonomous systems, rather than thinking that ethics is not something they need to be worrying about. The document, called Ethically Aligned Design, includes a series of detailed recommendations based on the input of more than 100 “thought leaders” working in academia, science, government and corporate sectors, in the fields of AI, law and ethics, philosophy and policy.

Bb199 - Onfim - Wikipedia. A.I. Experiments. Driftin’ Way Of Life. It kind of amazes me that nobody seems to know the man behind one of the world’s most well-known songs. 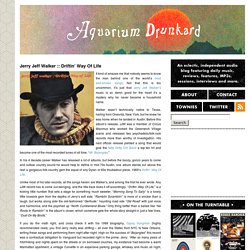 Not that this is too uncommon, it’s just that Jerry Jeff Walker’s music is so damn good for the heart it’s a mystery why he never became a household name. Walker wasn’t technically native to Texas, hailing from Oneonta, New York, but he knew he was home when he landed in Austin. Before this album’s release, JJW was a member of Circus Maximus who worked the Greenwich Village scene and released two psychedelic/folk-rock records more than worthy of investigation. His next official release yielded a song that would give the Nitty Gritty Dirt Band a top ten hit and become one of the most recorded tunes of all time, “Mr. Caryl Chessman - Wikipedia. Caryl Whittier Chessman (May 27, 1921 – May 2, 1960) was a convicted robber, kidnapper and rapist who was sentenced to death for a series of crimes committed in January 1948 in the Los Angeles area. The "first modern American executed for a non-lethal kidnapping",[1] Chessman was convicted under a loosely interpreted "Little Lindbergh law" – later repealed, but not retroactively – that defined kidnapping as a capital offense under certain circumstances.

His case attracted worldwide attention, and helped propel the movement to abolish capital punishment in California. Early years[edit] A keyboard for your back – Ignacio Tartavull – Medium. If you’re the kind of person who uses a laptop for many hours a day you know if the monitor is at the right height for your back and neck your arms and shoulders are too high, if the keyboard is at the best height for your arms and shoulders, you must hunch your shoulders and neck to see the monitor. I also, as many others, want to kill our QWERTY keyboard but not because I believe there are other layouts which offer faster typing, just because I don’t want to have shoulders, neck or back pain.

The Prototype Some clay, Bluetooth modules, and a few hours produced the first prototype. UPL8.tv - a quarter million videos served. Are closed social networks inevitable? Are closed social networks inevitable? This is an archive of an old Google Buzz conversation (circa 2010?) On a variety of topics, including whether or not it’s inevetible that a closed platform will dominate social. Piaw: Social networks will be dominated primarily by network effects. That means in the long run, Facebook will dominate all the others.

Formed of three panels and totalling almost four metres in length, the triptych is a dizzyingly detailed and delightfully surreal work, the possible meanings of which have kept scholars busy for centuries. The left panel — sometimes referred to as the Joining of Adam and Eve — is home to a paradise-like scene from the Garden of Eden, most likely of that moment in which God presents Eve to Adam. Although it clearly has its routes in the Biblical story, Bosch’s particular take on it — with its strange beasts, Adam’s almost-lustful gaze – is unlike anything else depicted in the history of Western art. Experiential… by Gerald M. Weinberg. Edwardsville Pierogi Festival Attracts Crowd. <div>Please enable Javascript to watch this video</div> Deep state.

The deep state (Turkish: derin devlet) is alleged to be a group of influential anti-democratic coalitions within the Turkish political system, composed of high-level elements within the intelligence services (domestic and foreign), Turkish military, security, judiciary, and mafia.[1][2] The notion of deep state is similar to that of a "state within the state". Alux.com. Abdul Sattar Edhi. Famous quote. Surviving with the Vietnamese Tarzan. Surviving with the Vietnamese Tarzan. In Africa, Lion King Bibi begins to outroar the Palestinians. ADDIS ABABA, Ethiopia — A life-size stuffed lion greets visitors to the National Palace in Addis Ababa, lying on a red carpet adorned with Stars of David.

Always aware of a good frame, Prime Minister Benjamin Netanyahu did not pass up on the opportunity to have his photograph taken with the lion on the sidelines of his meeting with Ethiopian Prime Minister Hailemariam Desalegn Thursday morning. Get The Times of Israel's Daily Edition by email and never miss our top stories Free Sign up! Mike Dash. Mike Dash (born 1963) is a Welsh writer, historian and researcher. He is best known for books and articles dealing with dramatic yet little-known episodes in history. Biography[edit] Dash was born in London. He attended Peterhouse, a college at the University of Cambridge particularly noted for teaching history,[1][2] and completed postgraduate work at King's College London, where he obtained a Ph.D.