Ascension Kitchen. How to Make a Crystal Elixir – a Simple Vibrational Medicine April 1, 2014 A bit of a different post today. 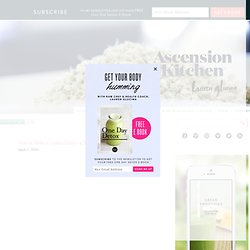 I am making a herbal tincture for insomnia but have decided to first infuse the vodka used to make it with a crystal, to take on some of it’s relaxing and stress relieving properties. Choming Essences. Home -> Choming Essences You may view the essences by alphabetical order or by logical groupings. 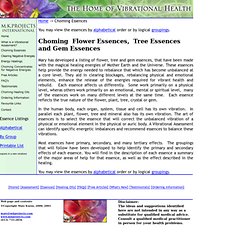 Mary has developed a listing of flower, tree and gem essences, that have been made with the magical healing energies of Mother Earth and the Universe. Evening Primrose Oil Benefits & Information. Evening Primrose Oil has been called the most sensational preventive discovery since vitamin C. 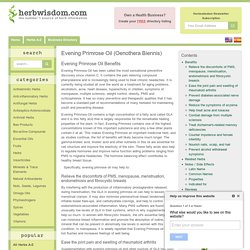 It contains the pain relieving compound phenylalanine and is increasingly being used to treat chronic headaches. It is currently being studied all over the world as a treatment for aging problems, alcoholism, acne, heart disease, hyperactivity in children, symptoms of menopause, multiple sclerosis, weight control, obesity, PMS and schizophrenia. It has so many preventive and therapeutic qualities that it has become a standard part of recommendations of many herbalist for maintaining youth and preventing disease. Evening Primrose Oil contains a high concentration of a fatty acid called GLA and it is this fatty acid that is largely responsible for the remarkable healing properties of the plant. In fact, Evening Primrose contains one of the highest concentrations known of this important substance and only a few other plants contain it at all. Specifically, evening primrose oil may help to: The Magnificent Purslane - Edible Landscaping at its best!

What was one of Mahatma Gandhi's favorite foods? 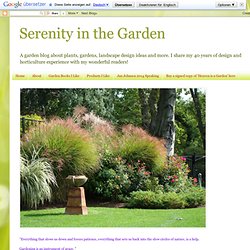 And what did Henry Thoreau eat while residing at Walden Pond? PURSLANE. Burdock. Arctium lappa Description This plant has wavy-edged, arrow-shaped leaves and flower heads in burrlike clusters. 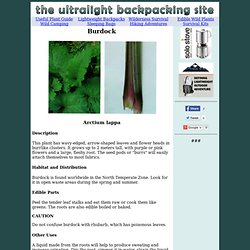 It grows up to 2 meters tall, with purple or pink flowers and a large, fleshy root. The seed pods or "burrs" will easily attach themselves to most fabrics. Zodiac signs Astrology and Plants - Herbs Pennyroyal. Medicinal Plants. Archive of Herbs of the Week. Goldenseal Herbal Medicine Use. Photo by Deb Jackson Copyright 2000 Hydrastis canadensis Goldenseal is endangered and should be cultivated, not harvested from the wild. 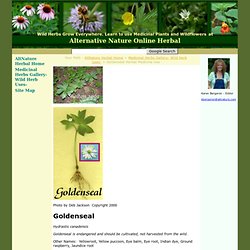 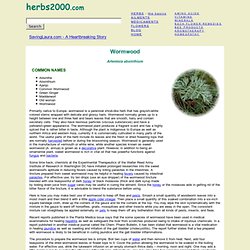 Wormwood normally grows up to a height between one and three feet and bears leaves that are smooth, hairy and contain secretary cells. They also have resinous particles (viscous substances) and have a yellowish-green appearance. Some time back, chemists at the Experimental Therapeutics of the Walter Reed Army Institute of Research in Washington DC have initiated prolonged researches into the sweet wormwood's aptitude in reducing fevers caused by killing parasites in the intestines. Zodiac signs Astrology and Plants - Herbs Orpine. Ascension Kitchen. Ayurvedic Healing - Ashwagandha. Ashwagandha, one of the most vital herbs in Ayurvedic healing, has been used since ancient times for a wide variety of conditions, but is most well known for its restorative benefits. 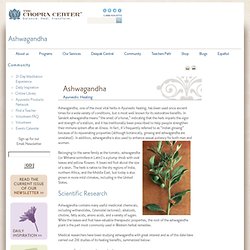 In Sanskrit ashwagandha means “the smell of a horse,” indicating that the herb imparts the vigor and strength of a stallion, and it has traditionally been prescribed to help people strengthen their immune system after an illness. In fact, it’s frequently referred to as “Indian ginseng” because of its rejuvenating properties (although botanically, ginseng and ashwagandha are unrelated). In addition, ashwagandha is also used to enhance sexual potency for both men and women. Belonging to the same family as the tomato, ashwagandha (or Withania somnifera in Latin) is a plump shrub with oval leaves and yellow flowers. It bears red fruit about the size of a raisin. Scientific Research Practical Uses and Precautions The usual recommended dose is 600 to 1000 mg, twice daily. Neem - Medicinal Herb Info. Scientific Names Azadirachta indicaMeliaceae family. 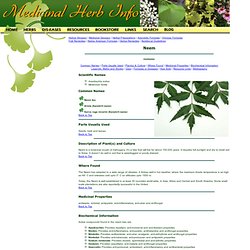 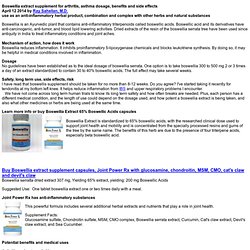 Use as an anti-inflammatory herbal product, combination and complex with other herbs and natural substances Boswellia is an Ayurvedic plant that contains anti-inflammatory triterpenoids called boswellic acids. Saloop. Sassafras: Herb of the Week 8/20/98. Sassafras albidum: Lauraceae PART USED: root bark MERIDIANS: Lungs, Kidney. Sassafras Herb: Uses and Benefits. The sassafras herb is a native plant found in eastern Asia. This herb can have one of three different shaped leaves and grows on the sassafras tree, or shrub. Sassafras herb has been known to be beneficial for various conditions.

Some of the most common ones include bone and joint conditions, rheumatism, skin problems, stomach-aches and arthritic pain. The active ingredients in sassafras root contain about 2 percent essential oil and about 80 percent safrole. The most common way to consume sassafras herb is through the consumption of tea. Burdock( Arctium lappa ) Burdock Root - Definition and Cooking Information - RecipeTips. A root vegetable that comes from the Burdock plant a member of the thistle family, which can be readily identified by the large green unsplit and wavy leaves with tall bare stalks. The variety commonly considered to be a nuisance weed (Arctium lappa) is the wild Burdock that is not the root chosen for eating.

Burdock Root is a purgative herb. The Burdock (the plant of burdock root) is a member of the thistle family. The plant contains burrs (the type that stick to your clothing). Burdock is a common weed that grows throughout the North American Continent. The roots, young stems, and seeds of the Burdock plant are edible. Parts of burdock can be cooked and consumed, or eaten raw in salads. Parts of the Burdock plant are eaten throughout many cultures worldwide. During its first year, the Burdock plant produces only green leafy growth. Burdock Root's actions in the body For centuries Burdock has been used throughout the world to cure illness and disease. Burdock root also improves digestion.