Science. Giffen good - Wikipedia. Background[edit] Types of goods in economics It has been suggested by Etsusuke Masuda and Peter Newman that Simon Gray described "Gray goods" in his 1815 text entitled The Happiness of States: Or An Inquiry Concerning Population, The Modes of Subsisting and Employing It, and the Effects of All on Human Happiness.[1] The chapter entitled A Rise in the Price of Bread Corn, beyond a certain Pitch, tends to increase the Consumption of it, contains a detailed account of what have come to be called Giffen goods, and which might better be called Gray goods. 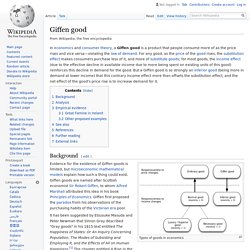 Analysis[edit] For most products, demand curve has negative slope (slope, that is constant in case of a straight demand function, must not be confused with price elasticity of demand, that varies depending on the point of the curve on which it is calculated and is not therefore constant even along a straight demand curve; see the mathematical definition for more). As Mr. Celtic Meaning of Astrology. Links to Celtic Astrology and Meanings When we contemplate the Celtic meaning of astrology, it's first helpful to recognize the Celts came up with a system of astrological classification long before the Roman calendar was formulated, and long before the inception of classic Greco-Roman astrology. 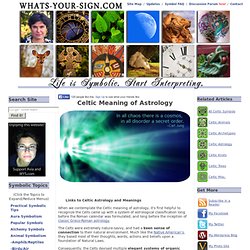 The Celts were extremely nature-savvy, and had a keen sense of connection to their natural environment. Much like the Native American's, they based most of their thoughts, words, actions and beliefs upon a foundation of Natural Laws. Consequently, the Celts devised multiple elegant systems of organic classification. A little study into the Celtic way of living reveals a special genius when it comes to observing the motions of the Earth and its connection to her inhabitants as well as her place in the cosmos.

Guided Mantra Meditation and Primordial Sound Meditation. You and Your Five 5 Senses Jiminy Cricket Walt Disney 16mm Film HD Hbvideos. March 2005. WHEN YOU WORK with these symbols, draw them in whatever way is the most comfortable for you. 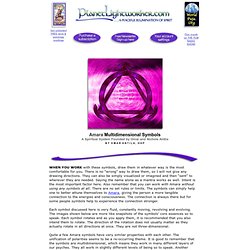 There is no “wrong” way to draw them, so I will not give any drawing directions. They can also be simply visualized or imagined and then “sent” to wherever they are needed. Saying the name alone as a mantra works as well. Intent is the most important factor here. Also remember that you can work with Amara without using any symbols at all. March's symbol is: Eternal Flame within the House of Life THIS SYMBOL is drawn into the heart center, then set to rotate and intended to radiate forth throughout our being. Eternal Flame within the House of Life ~ Rotated Form © Omar Antila, 2005. 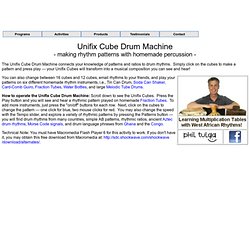 Simply click on the cubes to make a pattern and press play — your Unifix Cubes will transform into a musical composition you can see and hear! You can also change between 16 cubes and 12 cubes, email rhythms to your friends, and play your patterns on six different homemade rhythm instruments, i.e., Tin Can Drum, Soda Can Shaker, Card-Comb Guiro, Fraction Tubes, Water Bottles, and large Melodic Tube Drums. How to operate the Unifix Cube Drum Machine: Scroll down to see the Unifix Cubes. Press the Play button and you will see and hear a rhythmic pattern played on homemade Fraction Tubes.

Technical Note: You must have Macromedia Flash Player 6 for this activity to work. Home.

Like A Lunatic. Ho'oponopono - Morrnah's Prayer. Labyrinths. Labyrinths A labyrinth is an ancient symbol that relates to wholeness. 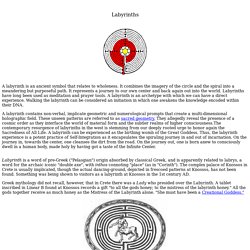 It combines the imagery of the circle and the spiral into a meandering but purposeful path. It represents a journey to our own center and back again out into the world. Labyrinths have long been used as meditation and prayer tools. A labyrinth is an archetype with which we can have a direct experience. A labyrinth contains non-verbal, implicate geometric and numerological prompts that create a multi-dimensional holographic field. Labyrinth is a word of pre-Greek ("Pelasgian") origin absorbed by classical Greek, and is apparently related to labrys, a word for the archaic iconic "double axe", with inthos connoting "place" (as in "Corinth"). Greek mythology did not recall, however, that in Crete there was a Lady who presided over the Labyrinth. 7-Fold Cretan Labyrinth Another couple associated with the Labyrinth was Theseus and Ariadne. In the 3rd century BC coins from Knossos are still struck with the labyrinth symbol. 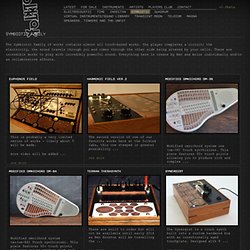 The player completes a circuit; the electricity, the sound travels through you and comes through the other side being altered by your cells. These are incredible works to play with incredibly powerful sound. Everything here is create by Ben and Arius individually and/or as collaborative efforts. Analog hands Part of the Symbiotic Family.

The Symbiotic family of works contains almost all touch-based works.