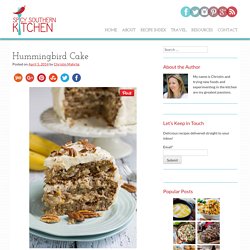 The first Hummingbird Cake recipe was published in Southern Living magazine in 1978 after being submitted by a reader from Greensboro, North Carolina. It became the most requested recipe in the magazine’s history Typically dense and moist and very rich and sweet, Hummingbird Cake is a great dessert for parties and get togethers.

It will fill you up in a hurry and should be cut in small slices. It is known to induce tummy aches if eaten in too large a quantity. Hummingbird Cake almost tastes like banana bread and carrot cake had a baby together. Occasionally, Hummingbird Cakes will have coconut in them, probably because coconut is such a natural fit with banana and pineapple. The technique for making the cream cheese frosting is from America’s Test Kitchen and I love it. Bourbon Pecan Pie - Vanilla And Bean. Gluten Free Dessert - Grain-Free Pecan Pie. Slow Cooker Beef Brisket French Dip Sandwiches #SundaySupper.

I know…four days in and I’ve already jumped the healthy bandwagon. 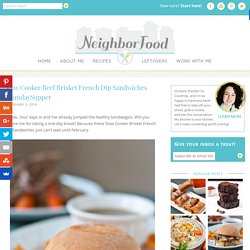 Will you forgive me for taking a one day break? Because these Slow Cooker Brisket French Dip Sandwiches just can’t wait until February. It wasn’t supposed to be this way. This was supposed to be a nice simple beef brisket served with a pile of carrots, onions, and potatoes. Sure, it wasn’t exactly the picture of health, but it was a complete meal made right in your crockpot. I blame the brisket for this mess. The brisket literally fell apart. I took one bite of the stuff and some instinct in my brain just took over. Four Cheese White Pizza (and a Blog Anniversary!) This will most likely be a long post. 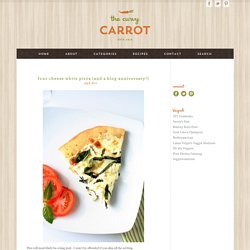 I won’t be offended if you skip all the writing. But, The Curvy Carrot (my extracurricular baby) has just turned one. I cannot believe that I started this blog one year ago. I had just gotten back from the Food and Light Workshop in Boulder, Colorado with Annie. I had been tossing the idea around in my head for a long time. A year ago, I was living with my parents, in the middle of a very intense period of my life: finishing up residency, going through a divorce from a very unhealthy relationship, trying to sell a home in a super horrible market, but I simply decided to lay it all out there and start doing what I wanted to do.

I’ve reached several goals in a year. So, a year later, I am in a (very) tiny and (very) hot little one-bedroom basically studio apartment with two cats and one very tired doggy (who loves her new friends at “camp” everyday) with an oven that only fits one baking sheet at a time and an excruciatingly long pre-heat time. 1. How to make epic pancakes with your Japanese rice cooker. Every summer, I try to spend as many days as possible on the beach at Enoshima, and each time I get out of the station and walk towards the sand, I pass a long line of people waiting for a seat at the local pancake restaurant. 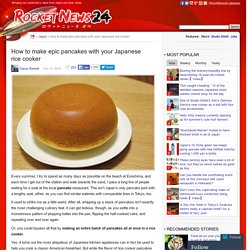 This isn’t Japan’s only pancake joint with a lengthy wait, either, as you can find similar eateries with comparable lines in Tokyo, too. It used to strike me as a little weird. After all, whipping up a stack of pancakes isn’t exactly the most challenging culinary feat. It can get tedious, though, as you settle into a monotonous pattern of plopping batter into the pan, flipping the half-cooked cake, and repeating over and over again. Or, you could bypass all that by making an entire batch of pancakes all at once in a rice cooker. Yes, it turns out the most ubiquitous of Japanese kitchen appliances can in fact be used to help you cook a classic American breakfast.

To start, simply toss your pancake mix and any other ingredients it calls for into the rice cooker’s pot. Yummy Crumble - A Blog About Recipes For Sweets, Desserts, and Everything Delicious. Pumpkin Bourbon Ice Cream Recipe. Fall is almost here and that means one thing: PUMPKIN. 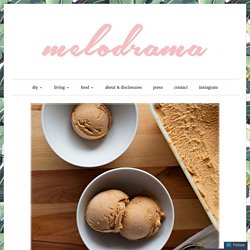 Pumpkin flavored food has become an American tradition and our appetite for it only seems to be growing. Forget the leaves. Forget the sweaters. We want our pumpkin flavored foods and we want them now! Bring on the cookies, pies, and bread puddings. I usually like to wait until summer is officially over before I indulge in autumnal themed foods, but this ice cream is the perfect recipe to transition you into fall. It took a couple of tries but I think we nailed it with this recipe. Ingredients 1 cup pumpkin puree 1 tsp. vanilla extract 1 cup heavy cream 1 cup whole milk 3/4 cup firmly packed light brown sugar 5 egg yolks 1/2 tsp ground cinnamon 1/2 tsp ground ginger 1/4 tsp ground cloves 1/4 tsp salt 1/4 tsp freshly grated nutmeg 1/4 cup bourbon In a bowl, mix together the pumpkin puree and vanilla.