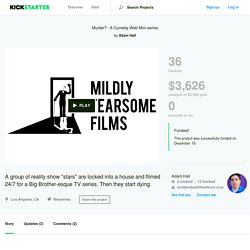 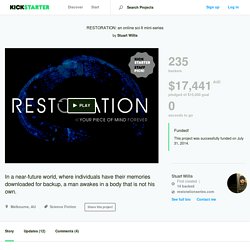 Antidote 15 – How far would you go to save your own life? RECKONING - a Web Mini Series - HOME. Club Swim - Web Miniseries. Club Swim, a mockumentary miniseries, follows the life of an undervalued assistant swim coach as he forms his own team of misfit swimmers, the Flounders. 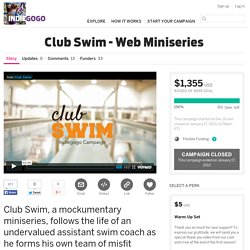 Club Swim – Season 1 In the fall of 2012, we set out to create a collaborative miniseries project with some fellow media communication students at our university. With just some personal equipment, a few scripts, and a couple hours every weekend in our athletic building, we completed 5 episodes in just 5 weeks. We all had so much fun we wanted to do it again – but better. We have more than 50 media and acting students requesting to work on future Club Swim episodes, and our school has offered us access to some of their professional equipment. Here’s where you come in… Creating any project has costs. All our episodes will be available for free online, and making the best possible product for our followers is our biggest thank you. Other Ways You Can Help. What Does it Cost to Make a Webisode? As striking writers and Hollywood studios bicker over how much money is or isn’t being generated by online shows, let’s turn our attention to a different question: How much does it cost to create an original web show? 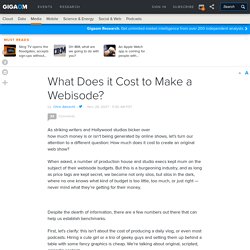 When asked, a number of production house and studio execs kept mum on the subject of their webisode budgets. But this is a burgeoning industry, and as long as price tags are kept secret, we become not only silos, but silos in the dark, where no one knows what kind of budget is too little, too much, or just right — never mind what they’re getting for their money. Despite the dearth of information, there are a few numbers out there that can help us establish benchmarks. First, let’s clarify: this isn’t about the cost of producing a daily vlog, or even most podcasts.

How Do You Define Web Series Success? In the independent web series world, success can be tough to define. 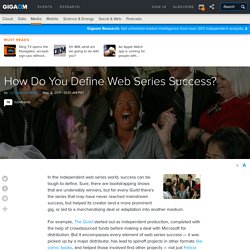 Sure, there are bootstrapping shows that are undeniably winners, but for every Guild there’s the series that may have never reached mainstream success, but helped its creator land a more prominent gig, or led to a merchandising deal or adaptation into another medium. For example, The Guild started out as independent production, completed with the help of crowdsourced funds before making a deal with Microsoft for distribution. But it encompasses every element of web series success — it was picked up by a major distributor, has lead to spinoff projects in other formats like comic books, and helped those involved find other projects — not just Felicia Day, but also Sandeep Parikh and Jeff Lewis. What other shows represent success of some sort in this space?

Below is a list representing some of the best examples out there for independent creators. Undoubtedly, there are some shows I’m overlooking here. CreatorUp! - Learn to Make Great Videos. Kickstarter. How_to_produce_your_own_web_series_on_nearly_a_zero_budget_e-book.pdf. How to Create a Web Series: 7 Tips for Creating A Successful WebSeries. Web series are no different when it comes to video marketing. 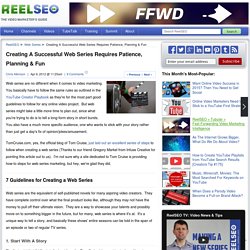 You basically have to follow the same rules as outlined in the YouTube Creator Playbook as they're for the most part good guidelines to follow for any online video project. How to make a webseries: A 'Zombie Basement' case study. Just before Halloween, when the world is at its peak saturation of all things ghastly and ghostly, a 77-second teaser for a zombie-themed webseries dropped on YouTube. 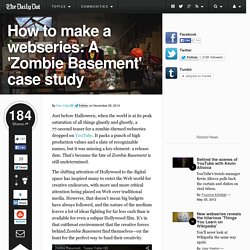 It packs a punch of high production values and a slate of recognizable names, but it was missing a key element: a release date. That’s because the fate of Zombie Basement is still undetermined. The shifting attention of Hollywood to the digital space has inspired many to enter the Web world for creative endeavors, with more and more critical attention being placed on Web over traditional media. However, that doesn’t mean big budgets have always followed, and the nature of the medium leaves a lot of ideas fighting for far less cash than is available for even a subpar Hollywood film.

It’s in that cutthroat environment that the creative forces behind Zombie Basement find themselves—on the hunt for the perfect way to fund their creativity. “I have an 8-year-old son, and his dream is to be a YouTuber,” he said. Cost of a Web Series - Season Two. Posted July 25, 2013 Over a year ago we raised $273,725 on Kickstarter for Season One of Video Game High School. 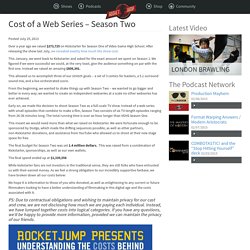 After releasing the show last July, we revealed exactly how much the show cost. This January, we went back to Kickstarter and asked for the exact amount we spent on Season 1. The Cost of a Webseries. In September of 2011, we decided to try running a Kickstarter campaign for the first season of our feature-length webseries Video Game High School. 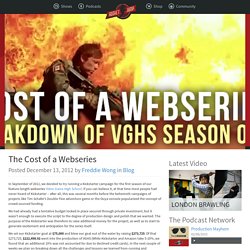 If you can believe it, at that time most people had never heard of Kickstarter – after all, this was several months before the behemoth campaigns of projects like Tim Schafer’s Double Fine adventure game or the Ouya console popularized the concept of crowd-sourced funding. We had already had a tentative budget locked in place secured through private investment, but it wasn’t enough to execute the script to the degree of production design and polish that we wanted.

The purpose of the Kickstarter was therefore to raise additional money for the project, as well as to start to generate excitement and anticipation for the series itself. We set our Kickstarter goal at $75,000 and blew our goal out of the water by raising $273,725. All said and done, VGHS Season One cost $636,010.71. How to Create A Web Series [Part One: Pre-Production] This year is my year of doing big, scary things I’ve never done before. 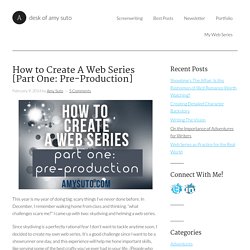 In December, I remember walking home from class and thinking, “what challenges scare me?” I came up with two: skydiving and helming a web series. Since skydiving is a perfectly rational fear I don’t want to tackle anytime soon, I decided to create my own web series. It’s a good challenge since I want to be a showrunner one day, and this experience will help me hone important skills, like serving some of the best crafty you’ve ever had in your life. (People who have had my chocolate chip cookies know what’s up.) My web series is called Antidote 15, and you can read more about it here. Writers On The Web: Developing Web Series Ideas, Part 1. So you’ve decided to write and produce your own web series… now what? It’s time to start brainstorming and developing web series ideas, characters, and premise. But before you do, read on… Kickstarter: You’re Doing it Wrong.

Script consultant Julie Gray is the author of Just Effing Entertain Me: A Screenwriter’s Atlas. A veteran story analyst for some of the biggest production companies in Hollywood, Julie will be appearing at the London Screenwriter’s Festival on October 25th. Contact Julie here. How many Kickstarter campaign requests do you receive in a given month? You might be very involved in a filmmaking or screenwriting community and receive several. You might be working on your own right now. You and I are not so different. To write a script and/or direct a teaser for your short or feature film and then to create a Kickstarter Campaign for the project takes amazing dedication and tons of precious time. But I am not excited about your Kickstarter project.

Because you’re doing it wrong. How to Make a Web Series and Why It's Important. Don’t Know How to Start a Web Series? Award-winning web series creator, Rebecca Norris, gives her expert advice in our FREE download! Download Your Free Copy of Creating a Web Series 101 Now! 1. Get your TV pilot idea off the ground. If you have a TV show idea and can’t get noticed by a network, take your TV pilot and break it into mini episodes of two-minute, bite-sized bits. 2.

6 Reasons To Start A Web Series. 7 Things to Consider Before Launching Your Web Series. By Brian Rodda | Indiewire November 7, 2014 at 6:58PM Here are seven principles to consider before offering up your first video to the Internet Gods. "High Maintenance" Many creatives all across the country are running to the interwebs and online video to get their work seen and heard, and YouTube, the world's largest video distribution platform, uploads 100 hours of video content every minute.

Web Series: Four Things to Ask Yourself Before Starting.