TROUPEAU TRANSLATION CH. 2. Economist. Is this remote Siberian language an ancestor to Navajo? Edward Vajda believes he knows where an entire family of North American languages came from. 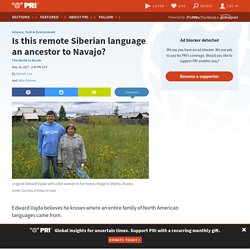 Vajda, a historical linguist at Western Washington University, spent several years in Russian Siberia learning Ket, a language so obscure that most of its own tribe no longer speak it. In this epsiode of The World in Words, Vajda tells Alina Simone that he believes he was the first linguist from North America to meet Ket people or hear the language spoken. But he had to be patient. This part of Siberia was closed to outsiders when it was part of the Soviet Union. Even today, it takes days to get to.

Keeleveeb. Der Formenbestand des deutschen Tempussystems. Quran Concordance, Grammar and Dictionary in one! Why is English so weirdly different from other languages? English speakers know that their language is odd. Atlas of the World's Languages in danger. UNESCO Interactive Atlas of the World’s Languages in Danger The online edition of the Atlas is complementary to the print edition It does not reproduce the regional and thematic chapters of the print version, but it offers additional information on the listed endangered languages.

Via this interface, you can browse through them, using combinations of search criteria and/or zooming in the map below (see Browsing functionnalities ). For more detailed information, please consult the Languages mapping , Contribute your comments and FAQ pages. TITUS: INDEX. Чиста діва. Benvenuti. Monumenta Altaica. Word list. List of Language and Linguistics Resources. Free Language Resources for over 200 hundred languages. Mysterious Markings May Hold Clues to Origin of Writing. For decades, archaeologists have pored over the spectacular images of stampeding horses and charging bison left by Ice Age artists on European cave walls more than 10,000 years ago. 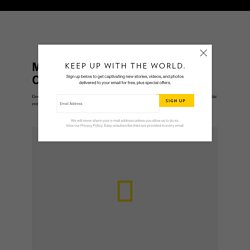 But few researchers have paid much attention to the simple geometric signs that often accompany the art. Unable to interpret or decipher these markings, many archaeologists dismissed them as mere decorations. Now, paleoanthropologist Genevieve von Petzinger, a Ph.D. student at the University of Victoria in Canada and a National Geographic Emerging Explorer, has conducted a new study of the signs, gleaning fresh clues to their purpose. La lingua etrusca: anatomia di un falso mistero. Study Mongolian. Suggested Study Method Besides the key sentences, most of the dialogs below do not have English translations. 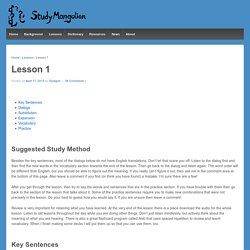 Don’t let that scare you off. Listen to the dialog first and then find the new words in the vocabulary section towards the end of the lesson. Then go back to the dialog and listen again. The word order will be different than English, but you should be able to figure out the meaning. Bolor Dictionary. La lingua etrusca: anatomia di un falso mistero. False Friends of the Slavist. Советские школьные учебники - скачать бесплатно. Присоединяйтесь к нам в Facebook и ВКонтакте Советские школьные учебники. 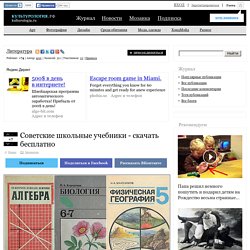 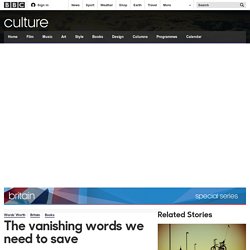 But he is also a magician, of sorts – one who weaves spells using lost phrases that recall a different connection with our landscape. In his latest book Landmarks, the British naturalist calls for “a glossary of enchantment for the whole earth, which would allow nature to talk back and would help us to listen”. How the language you speak changes your view of the world.

Bilinguals get all the perks. 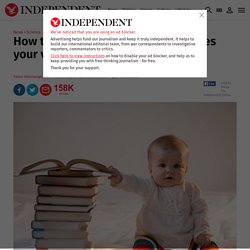 How Languages Evolved. Bonjour! Namastē! Hyālō! However you say “hello,” it might surprise you to learn that over 400 Indo-European languages may have come from one single language spoken mainly in ancient Anatolia, which is now modern-day Turkey. Indo-European languages are a specific language group of over 400 languages, including Spanish, German, Hindi, Portuguese and Urdu.

Created by the Business Insider Science team, the video animation below shows how languages could have spread from modern-day Turkey to Europe and Asia via the growth of farming, eventually evolving and becoming the languages we hear today. Korean lessons: Lesson 1. Fundamental features of Korean Language The Korean language is spoken by more than 60 million people. 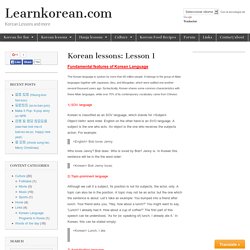 It belongs to the group of Altaic languages together with Japanese, Ainu, and Mongolian, which were splitted one another several thousand years ago. Syntactically, Korean shares some common characteristics with these Altaic languages, while over 70% of its contemporary vocabulary came from Chinese. 1) SOV language Korean is classified as an SOV language, which stands for <Subject-Object-Verb> word order. <English> Bob loves Jenny. Learn Norwegian Online. All languages have evolved to have this in common. Have you ever wondered why you say “The boy is playing Frisbee with his dog” instead of “The boy dog his is Frisbee playing with”? 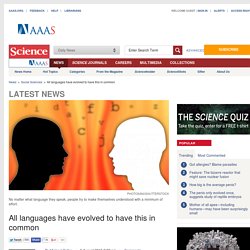 You may be trying to give your brain a break, according to a new study. An analysis of 37 widely varying tongues finds that, despite the apparent great differences among them, they share what might be a universal feature of human language: All of them have evolved to make communication as efficient as possible. Earth is a veritable Tower of Babel: Up to 7000 languages are still spoken across the globe, belonging to roughly 150 language families. And they vary widely in the way they put sentences together. MIT claims to have found a “language universal” that ties all languages together. Language takes an astonishing variety of forms across the world—to such a huge extent that a long-standing debate rages around the question of whether all languages have even a single property in common. 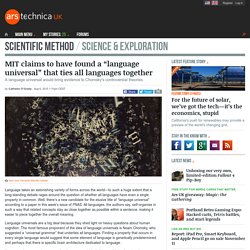 Well, there’s a new candidate for the elusive title of “language universal” according to a paper in this week’s issue of PNAS. All languages, the authors say, self-organise in such a way that related concepts stay as close together as possible within a sentence, making it easier to piece together the overall meaning. Language universals are a big deal because they shed light on heavy questions about human cognition. The most famous proponent of the idea of language universals is Noam Chomsky, who suggested a “universal grammar” that underlies all languages. Finding a property that occurs in every single language would suggest that some element of language is genetically predetermined and perhaps that there is specific brain architecture dedicated to language.

Self-organising systems. How to study Korean. The One-stop shop for learning Scottish Gaelic. WALS Online - 25 maps that explain the English language. English is the language of Shakespeare and the language of Chaucer.

It’s spoken in dozens of countries around the world, from the United States to a tiny island named Tristan da Cunha. It reflects the influences of centuries of international exchange, including conquest and colonization, from the Vikings through the 21st century. Here are 25 maps and charts that explain how English got started and evolved into the differently accented languages spoken today. The origins of English 1) Where English comes from English, like more than 400 other languages, is part of the Indo-European language family, sharing common roots not just with German and French but with Russian, Hindi, Punjabi, and Persian. 2) Where Indo-European languages are spoken in Europe today Saying that English is Indo-European, though, doesn’t really narrow it down much. Who is Cheburashka and How Can He Help You? Posted on 07. Oct, 2014 by Jenya in Culture, language, Russian for beginners Being that most of you are devoting your precious time and energy toward learning to speak Russian, I decided to introduce you to a new tool that may help you, as well as entertain you at the same time.

This tool is called Cheburashka. Where did English come from? - Claire Bowern. System Maintenance. System Maintenance. Icelandic Online. Playful Illustrations Make It Easy to Learn Chinese. By ShaoLan Hsueh. Speciali. تعلم العربية. WordReference Forums. Hello everybody, I am pleased to introduce the Arabic Resources thread. This thread will contain a compilation of helpful resources covering various topics about the Arabic language and gathered by our foreros.