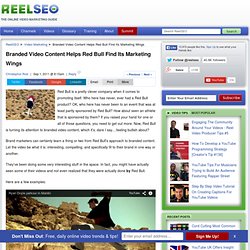 Who here has never, ever had a Red Bull product? OK, who here has never been to an event that was at least partly sponsored by Red Bull? How about seen an athlete that is sponsored by them? If you raised your hand for one or all of those questions, you need to get out more. Now, Red Bull is turning its attention to branded video content, which it's, dare I say....feeling bullish about? Brand marketers can certainly learn a thing or two from Red Bull's approach to branded content.

They've been doing some very interesting stuff in the space. Here are a few examples: Did you see the Red Bull in that one? This one is a bit more blatant in that their logos are all over the place, but again, it's not about the product really but about aligning it with athletes and personalities to kick that "me too" need to connect and fit in instinct in humans...their customers. I learned two things watching this one. Red Bull company history - How it all started. 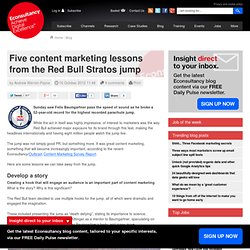 While the act in itself was highly impressive, of interest to marketers was the way Red Bull achieved major exposure for its brand through this feat, making the headlines internationally and having eight million people watch the jump live. The jump was not simply good PR, but something more. It was great content marketing, something that will become increasingly important, according to the recent Econsultancy/Outbrain Content Marketing Survey Report. Here are some lessons we can take away from the jump. Develop a story. Red Bull Stratos May Change Future Of Marketing. One small jump for Red Bull, one giant leap for business marketing: Red Bull Stratos may be the most successful marketing campaign of all time. 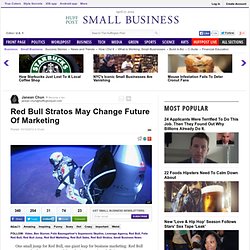 More than 8 million people worldwide watched YouTube's live stream on Sunday as Felix Baumgartner became the first person to break the sound barrier, starting in a freefall 128,000 feet above the Earth that reached a high speed of 833.9 miles per hour. Meanwhile, Red Bull broke the traditional barriers of marketing, sponsorship and social media, skyrocketing from an energy drink known for providing a quick buzz to a big-time generator of international buzz that makes the endeavors of other marketing innovators like Apple look small by comparison. The beauty of Red Bull Stratos is that it's not just a sensational stunt, but a business move that could translate into estimated sales of tens of millions of dollars, according to Ben Sturner, founder and CEO of Leverage Agency, a New York City-based sports, entertainment and media marketing company. 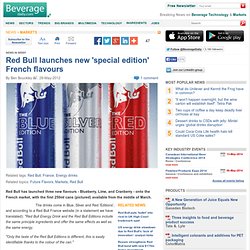 The drinks come in Blue, Silver and Red 'Editions', and according to a Red Bull France website (in a statement we have translated): "Red Bull Energy Drink and the Red Bull Editions include the same principle ingredients and offer the same effects as well as the same energy. "Only the taste of the Red Bull Editions is different, this is easily identifiable thanks to the colour of the can. " Red Bull France added that it could possibly add further flavours to the range in future; the Special Editions are currently only available in a limited number of European countries including Belgium, Austria, Spain and Portugal. Red Bull's Marketing Mix. Think Tank: Red Bull's Felix Baumgartner stunt was a masterclass in brand building.

At its most obvious, the Red Bull Stratos jump was simply the latest, greatest advertisement for the power of stunts to attract a crowd and attention for a brand or sponsor. Most are like fireworks, flaring brightly to appreciative whoops from the audience before fading from our consciousness. But some go on to take up permanent residency in our lives. It has long been forgotten that the Tour de France started life as a temporary publicity stunt for a struggling French newspaper. Lesson one: trust in the extraordinary to outshout, outshine and, perhaps, even outlast the ordinary.

Baumgartner’s skyfall must also be chalked up as a triumph for public relations over advertising and more orthodox sponsorship activity, albeit one that carried considerable downside risk. In these media-saturated times especially, “Start with the press release and work backwards” is good advice not just for PR practitioners but for publicity hungry advertisers, too (our second lesson). How Red Bull's Brand Marketing Strategy Took Flight. The recent passing of Thai billionaire and Red Bull co-founder Chaleo Yoovidhya got me thinking about the world’s most recognizable – and profitable – energy drink. 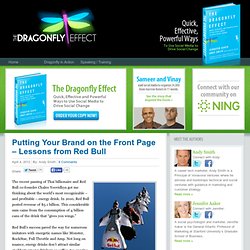 In 2010, Red Bull posted revenue of $5.1 billion. This considerable sum came from the consumption of 4 billion cans of the drink that “gives you wings.” Red Bull’s success paved the way for numerous imitators with energetic names like Monster, RockStar, Full Throttle and Amp. Not long on nuance, energy drinks don’t attract similar snobbery among drinkers as coffee, tea or wine do. Why Red Bull rocks social media marketing. Published on by Brafton Editorial With eMarketer predicting that social network ad spend will exceed $4 billion worldwide in 2011, brands should start thinking about smart marketing on the platform. 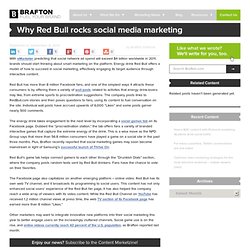 Energy drink Red Bull offers a model of how to succeed in social marketing, effectively engaging its target audience through interactive content. Red Bull has more than 8 million Facebook fans, and one of the simplest ways it attracts these consumers is by offering them a variety of wall posts related to activites that energy drink-lovers may like, from extreme sports to procrastination suggestions. The company posts links to RedBull.com stories and then poses questions to fans, using its content to fuel conversation on the site. The energy drink takes engagement to the next level by incorporating a social games tab on its Facebook page. Who are "Red Bull's" target market and why. Marketing Strategy of Red Bull. Red Bull | The Target Market 2. 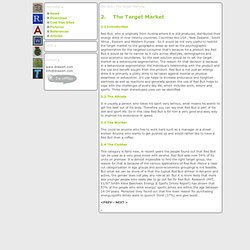 The Target Market 2.1 Introduction Red Bull, who is originally from where it is still produced, distributed their energy drink in over twenty countries. Countries like , , , Eastern and . Red Bull Takes Marketing Buzz Into Space. Red Bull Stratos.