Symbolic Pics of the Month (11/13) In this edition of SPOTM: Leona Lewis, Rihanna, Lebron James and a bunch of proving that Illuminati symbolism is omnipresent in mass media. 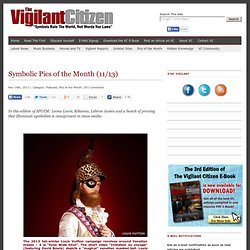 The 2013 fall-winter Louis Vuitton campaign revolves around Venetian masks – à la “Eyes Wide Shut”. The Vigilant Citizen. Symbolic Pics of the Month 01/14. In this edition of SPOTM: Miley Cyrus, Kanye West, Kourtney Kardashian, Jared Leto and, as usual, what the hell is wrong with the fashion world? 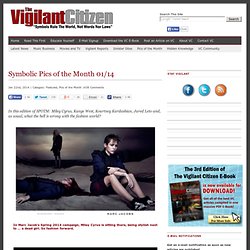 In Marc Jacob’s Spring 2014 campaign, Miley Cyrus is sitting there, being stylish next to … a dead girl. So fashion forward. In this pic, Miley looks really cool with shades on … the dead girl looks cools as well. The 2014 Grammy Awards: Still Pushing the Illuminati Agenda. The 2014 Grammy Awards featured a black magic witchcraft ritual disguised as a Katy Perry performance. 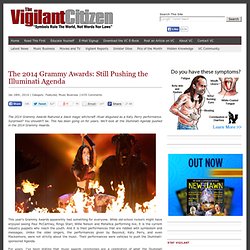 Surprised? You shouldn’t be. This has been going on for years. We’ll look at the Illuminati Agenda pushed in the 2014 Grammy Awards. This year’s Grammy Awards apparently had something for everyone. For years, I’ve been stating that music awards ceremonies are a celebration of what the Illuminati industry stands for, as their choreographed format offers the industry an opportunity to imprint the collective mind with specific messages and symbolism. Even E! Katy Perry's "Dark Horse": One Big, Children-Friendly Tribute to the Illuminati. 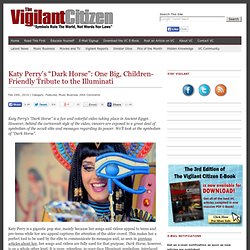 However, behind the cartoonish style of the video, viewers are exposed to a great deal of symbolism of the occult elite and messages regarding its power. We’ll look at the symbolism of “Dark Horse”. Katy Perry is a gigantic pop star, mainly because her songs and videos appeal to teens and pre-teens while her sex-appeal captures the attention of the older crowd. This makes her a perfect tool to be used by the elite to communicate its messages and, as seen in previous articles about her, her songs and videos are fully used for that purpose. Dark Horse, however, is on a whole other level. The Esoteric Meaning of the Movie "Prisoners" “Prisoners” is a 2013 thriller film about the abduction of two girls in Pennsylvania. 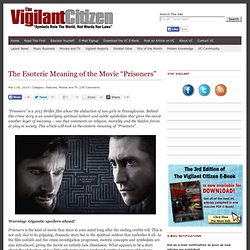 Behind this crime story is an underlying spiritual subtext and subtle symbolism that gives the movie another layer of meaning – one that comments on religion, morality and the hidden forces at play in society. This article will look at the esoteric meaning of “Prisoners”. Warning: Gigantic spoilers ahead! Prisoners is the kind of movie that stays in your mind long after the ending credits roll. This is not only due to its gripping, dramatic story but to the spiritual subtext that underlies it all. Prisoners takes place in an average American town, Conyers, Pennsylvania during the time of Thanksgiving. Keller Dover, the Father Mr. The Vigilant Citizen. "Don't Make Me Go Back, Mommy" : A Creepy Children's Book About Satanic Ritual Abuse.

“Don’t Make Me Go Back, Mommy”, is a children’s book published in 1990 written by author Doris Sanford. 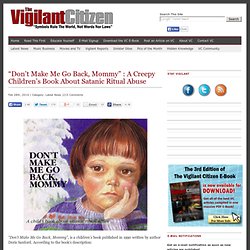 According to the book’s description: “The words of the text and the objects and situations illustrated are based on months of intensive research into the nature and practice of satanic ritual abuse. Any child who has been ritually abused will recognize the validity of this story.” The book was marketed primarily to mental health professionals, school counselors, parent organizations, and support groups. Peaches Geldof Found Dead at Age 25: "Sudden and Unexplained", a Year After Announcing Initiation to the O.T.O. Model and TV personality Peaches Geldof was found dead at her home in Kent, England on April 7th. 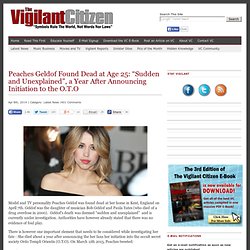 Geldof was the daughter of musician Bob Geldof and Paula Yates (who died of a drug overdose in 2000). Geldof’s death was deemed “sudden and unexplained” and is currently under investigation. Authorities have however already stated that there was no evidence of foul play. There is however one important element that needs to be considered while investigating her fate : She died about a year after announcing the her fans her initiation into the occult secret society Ordo Templi Orientis (O.T.O). On March 11th 2013, Peaches tweeted: “#93 #Thelema #o.t.o for all my fellow Thelemites on instagram!” Thelema is the name of the philosophy taught in the O.T.O. Peaches’ O.T.O. tattoo Peaches urged her social media followers to learn about the O.T.O, which caused a surge of interest for the secret society in mass media (well, tabloid news). The 3rd Edition of the VC E-Book is Now Available for Download!

The Deeper Meaning of "True Detective" - Season One. Michael Jackson Appears as Hologram at the Billboard Awards ... And is Used for Illuminati Agenda. Michael Jackson, aka the King of Pop, tragically lost his life in strange and nebulous circumstances in June 2009. 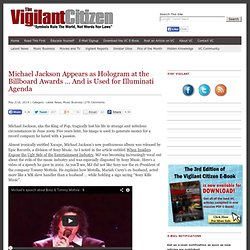 Five years later, his image is used to generate money for a record company he hated with a passion. Almost ironically entitled Xscape, Michael Jackson’s new posthumous album was released by Epic Records, a division of Sony Music. Lindsey Stirling's "Shatter Me" : A Video About Monarch Programming. Lindsey Stirling is not your typical pop star because, for one, she’s a violinist. 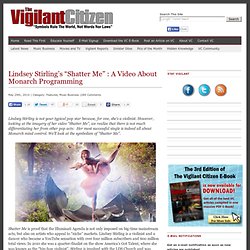 However, looking at the imagery of her video “Shatter Me”, we realize that there is not much differentiating her from other pop acts: Her most successful single is indeed all about Monarch mind control. We’ll look at the symbolism of “Shatter Me”. Shatter Me is proof that the Illuminati Agenda is not only imposed on big-time mainstream acts, but also on artists who appeal to “niche” markets. Lindsey Stirling is a violinist and a dancer who became a YouTube sensation with over four million subscribers and 600 million total views. In 2010 she was a quarter-finalist on the show America’s Got Talent, where she was known as the “hip-hop violinist”.

In 2013, she signed with Lady Gaga’s manager, Troy Carter, and released her second album, Shatter Me, in May 2014. Photo by ascensionprocess. Las Vegas Shooting : Was Jerad Miller a Patsy Used to Further an Agenda? On June 8th, a couple shot and killed two police officers inside a Las Vegas restaurant. 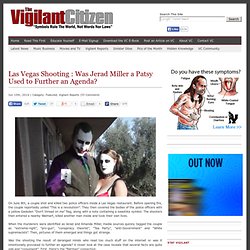 Before opening fire, the couple reportedly yelled “This is a revolution!”. They then covered the bodies of the police officers with a yellow Gadsden “Don’t thread on me” flag, along with a note containing a swastika symbol. The shooters then entered a nearby Walmart, killed another man inside and took their own lives. When the murderers were identified as Jerad and Amanda Miller, media sources quickly tagged the couple as “extreme-right”, “pro-gun”, “conspiracy theorist”, “Tea Party”, “anti-Government” and “White supremacists”. Then, pictures of them emerged and things got strange. The Vigilant Citizen. The Illuminati will make Christianity Illegal and Persecute and Kill Followers of Christ! New Princeton Study Proves America is NOT a Democracy. A recent scientific study undertaken by Martin Gilens & Benjamin I. Page of the prestigious Princeton University has revealed that the U.S. is far from a democracy as most Americans likely believe and is actually closer to a corporate oligarchy.

The Ivy League researchers studied data from roughly 1800 policy initiatives spanning 20 years and compared them with the opinion of the American electorate of the time to find that their preferences appeared to have had a “minuscule, near-zero, statistically non-significant impact” upon any public policy. While these recent ‘revelations’ may be old news to those conscious of how an economic elite deceitfully rule under the false pretense of “democracy”, they may nonetheless help to illustrate to those who still believe they have a say how they are in fact voiceless and ruled by a ruthless cabal of wealthy individuals with vested interests in keeping things the way they are.