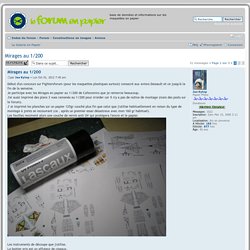 Les instruments de découpe que j'utilise.Le boitier gris est un affuteur de ciseaux. One Sheet No Waste - Simple Fold Delta. Hello Everyone, This article details the design and construction of another in my series of "One Sheet No Waste" designs. 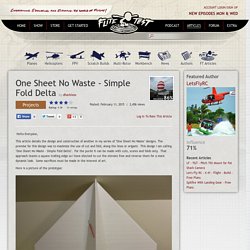 The premise for this design was to maximize the use of cut and fold, along the lines or origami. This design I am calling "One Sheet No Waste - Simple Fold Delta". For the purist it can be made with cuts, scores and folds only. That approach leaves a square trailing edge so I have elected to cut the elevons free and reverse them for a more dynamic look. Here is a picture of the prototype: I tried one short flight inside the local highschool gym but found it was just too energetic for those confines. f15kumi_b.pdf. The world's smallest flying glider- how to. Borg. Borg. 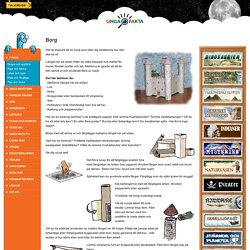 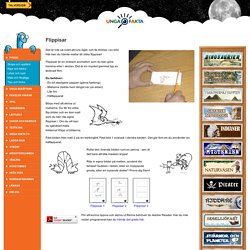 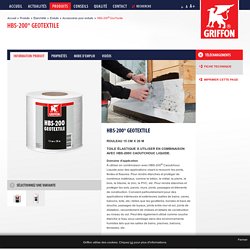 Dipper - Disney Planes Fire and Rescue Paper Craft. Saturday, 14 June 2014 14:40 Julius Perdana Disney Movie I stumbled upon a trailer video of new sequel of Disney Planes movie when I was looking for Planes trailer on youtube for my son. 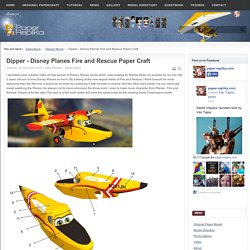 My 2 years old son is love Disney Planes so much. By looking at the new sequel trailer of Fire and Rescue, I think it would be more awesome than the first one. It would be so much fun watching it with my kids in cinema. Not like other kid's movie, my son never get bored watching the Planes, he always cry for more whenever the show ends. Tutorials. Simple Paper Craft. Tuesday, 06 May 2014 20:02 Julius Perdana Simple Paper Craft This is the fourth god to be added to the god and goddess of ancient Egypt paper craft collection. 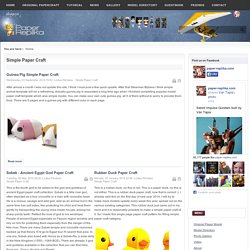 Sobek is a Nile river god, often depicted as a true crocodile or a man with crocodile head. He is a vicious, savage and wild god, wild as an animal but in the same time has soft sides, like protecting his child and treat them gently by transporting the young ones inside his jaw, among his sharp pointy teeth. Reflect the love of god to his worshiper. People of ancient Egypt especially on Faiyum region worship and rely on him for protecting them especially from the danger of the Nile river. MQ-9 Reaper 1/32. Monday, 04 January 2010 01:35 Julius Perdana Aircraft The latest United States Air Force Strike Unmanned Aerial Vehicle (UAV). 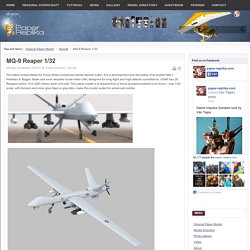 It is a development and derivative of its brother MQ-1 Predator A. Bigger, faster and even deadlier hunter killer UAV, designed for long flight and high altitude surveillance. USAF has 28 Reapers which 10.5 USD million each unit cost. Boeing PT-17 Stearman - Army Trainer Plane Paper Model. Tuesday, 02 September 2014 12:16 Julius Perdana Aircraft This is a model of Boeing PT-17 Stearman, from WWII era. 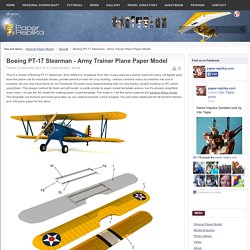 A biplane from 40s, it was used as a trainer plane for many US fighter pilot. Now the plane use for acrobatic shows, private owned or even for crop dusting. I always combine many my hobbies into one if possible. As you may have know on my Facebook I've been busy experimenting with my new hobby, scratch building an RC plane using foam. Sumi by itifonhom on DeviantArt. Instruction (military) Merry-go-around N1K2 Shiden. Saturday, 07 April 2012 12:57 Last Updated on Saturday, 07 April 2012 13:08 Written by Administrator Instruction for the Merry-go-around papercraft, can be found here. 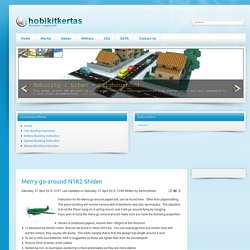 Other than papercrafting, The plane building will involve various skill of electronic and also aeronautics. The objective is to let the Plane hang on a ceiling mount, and it will go around flying by hanging. If you plan to build the merry go around aircraft, make sure you have the following properties: Stocks of cardboard papers, heavier than 160gsm at the minimum1x standard toy electric motor, that can be found in many chil's toy. You can also opt to build it without the motor. Pay a very careful attention when placing the rotor blades. The final important step is to put a strong string and keep the plane well balanced at its central weight. WARNING : if the plane swing too fast, try to reduce the length of the hanging wires. One Piece Papercraft - Brook ~ Paperkraft.net - Free Papercraft, Paper Model, & Papertoy.

A new anime papercraft has been spotted in our vicinity, this charming character is from One Piece, originally a Japanese manga series that has been adapted to anime. Brook is the "Gentelman Skeleton" with the huge afro, he's a musician by trade and made his first appearance on episode 337 of One Piece anime series. Ichinogami Paper Base: Dash-1 Emperor. Hi... Another busy weekend ahead.

These designations are a bit confusing since the designs were not produced in numerical order. The Yak-3 was developed alongside the Yak-9 but with a different mission since the type was originally designed to work in cooperation with the Soviet army at low altitude. It differed in a number of ways from the Yak-9 and had a smaller wingspan.

Essentially a lightweight clipped wing variant of the Yak-9, Pilots report that the aircraft flew similar to the Spitfire but with better initial climb. Praised for being light, fast, and rugged, the Yak-3 was rated as "superior" to the FW 190 and the Bf 109G which it was meeting on a daily basis. You'll always have better luck building models if you test the fit before gluing the parts together permanently. Aleksandr S. Fiddlersgreen. Stearman-PT17. The first service to show positive interest in this aircraft was the US Navy which, in early 1935.. These, however, received a different powerplant from that installed originally, primarily because the US Navy had a lot of 225-hp Wright J-5 radial engines in storage which were specified for installation in this initial order, the company changing the model number of these aircraft to Model 73.

The X-70 supplied for US Army evaluation was subjected to protracted testing and eventually, in early 1936, the USAAC contracted for the supply of 26 aircraft under the designation PT-13 (Primary Trainer, 13). These, powered by 215-hp Lycoming R-680-5 engines, were the first of the Stearman Model 75 series. This cautious approach by the US Army should not be considered as a reflection upon the capability of the new trainer. For the first time both the US Army and US Navy had a common model in 1942, basically t The design was unique in that it met the specifications for both the Army and Navy.