Gaming the system: how rewards affect performance. April 28th, 2011 by Tommaso De Benetti Sometimes the simplest things are the hardest to define. 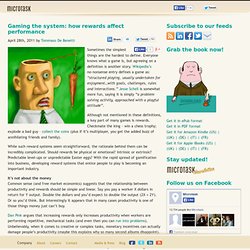 Everyone knows what a game is, but agreeing on a definition is another story. Wikipedia’s no-nonsense entry defines a game as: “structured playing, usually undertaken for enjoyment…with goals, challenges, rules and interactions.” Jesse Schell is somewhat more fun, saying it is simply “a problem solving activity, approached with a playful attitude”.

Although not mentioned in these definitions, a key part of many games is rewards. While such reward systems seem straightforward, the rationale behind them can be incredibly complicated. It’s not about the money Common sense (and free market economics) suggests that the relationship between productivity and rewards should be simple and linear. Dan Pink argues that increasing rewards only increases productivity when workers are performing repetitive, mechanical tasks (and even then you can run into problems). Mr Pink makes a compelling case.

Tom Sawyer Effect. The Overjustification Effect. The Misconception: There is nothing better in the world than getting paid to do what you love. 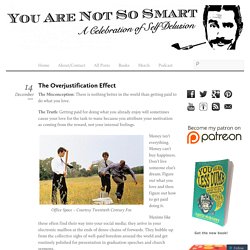 The Truth: Getting paid for doing what you already enjoy will sometimes cause your love for the task to wane because you attribute your motivation as coming from the reward, not your internal feelings. Office Space – Courtesy Twentieth Century Fox Money isn’t everything. Money can’t buy happiness. Don’t live someone else’s dream. Maxims like these often find their way into your social media; they arrive in your electronic mailbox at the ends of dense chains of forwards.

Money, fame, and prestige – they dangle just outside your reach it seems, encouraging you to lean farther and farther over the edge, to study longer and longer, to work harder and harder. If only science had something concrete to say about the whole thing, you know? The researchers discovered money is indeed a major factor in day-to-day happiness. Overjustification effect. The overjustification effect occurs when an expected external incentive such as money or prizes decreases a person's intrinsic motivation to perform a task. 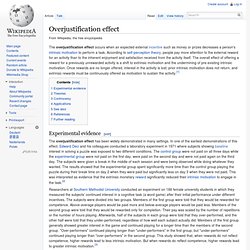 According to self-perception theory, people pay more attention to the external reward for an activity than to the inherent enjoyment and satisfaction received from the activity itself. The overall effect of offering a reward for a previously unrewarded activity is a shift to extrinsic motivation and the undermining of pre-existing intrinsic motivation. Once rewards are no longer offered, interest in the activity is lost; prior intrinsic motivation does not return, and extrinsic rewards must be continuously offered as motivation to sustain the activity.[1] Experimental evidence[edit] Researchers at Southern Methodist University conducted an experiment on 188 female university students in which they measured the subjects' continued interest in a cognitive task (a word game) after their initial performance under different incentives.

Overjustification effect. Why Both Intrinsic and Extrinsic Motivators Matter in Gamification « Strategic Synergy. Dan Ariely, a Professor of Psychology and Behavioral Economics at Duke University wrote a book titled Predictably Irrational where he describes the difference between Intrinsic and Extrinsic Motivators and how these affect management decisions in driving employee behavior . 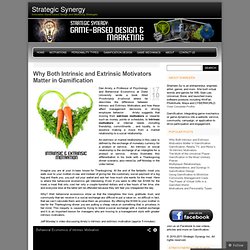 Ariely suggests that moving from extrinsic motivators or rewards such as money, points or schedules, to intrinsic motivators or internal needs including friendship, commitments , and loyalty, is in essence making a move from a market relationship to a social relationship. An extrinsic or market relationship in this case is defined by the exchange of monetary currency for a product or service. Games: Intrinsic vs. Extrinsic Rewards. Learning to Love Your AP History Assignments: How to Hack the Psychology of Student Motivation. {*style:<b>The War Against Extrinsic Motivation </b>*} In 1999, Alfie Kohn , an education writer described by magazine as “perhaps the country’s most outspoken critic of education’s fixation on grades,” published an article in titled “From Degrading to De-Grading.” It listed many arguments against grades, but its first is the most repeated: As Kohn explained: “One of the most well-researched findings in the field of motivational psychology is that the more people are rewarded for doing something, the more they tend to lose interest.”

Kohn is referring to the voluminous research on the difference between and motivation. The former describes motivation that comes from rewards or punishments outside the task, like studying to achieve a good grade. Roberts method. November 3rd, 2010 · 32 comments Major Doubts “I’m enrolled to study computer science…a choice that was heavily influenced by my parents.” 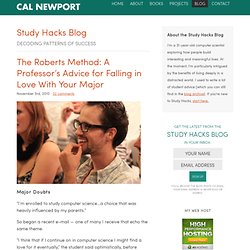 So began a recent e-mail — one of many I receive that echo the same theme. “I think that if I continue on in computer science I might find a love for it eventually,” the student said optimistically, before adding: “but a few days ago I saw that the university still has some open slots in the psychology program…” The exams in this student’s computer science courses were getting tougher, and she began to wonder if she had missed her true calling in another field, like psychology. Focusing on intrinsic reinforcers and punishers, and your dog's innate needs. This page is a component of the Glossary of the Dog Science, CBC Dog Training Workshop, and an element of the Dog Science Network Go to the index of the Glossary of Terms. 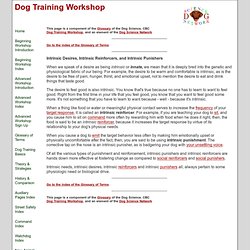 Why Both Intrinsic and Extrinsic Motivators Matter in Gamification « Strategic Synergy.

Satisfying Human Needs. Study: Doing Good Makes You Feel Good. There's a new incentive to doing good things for others: It makes you happier, according to a new study. 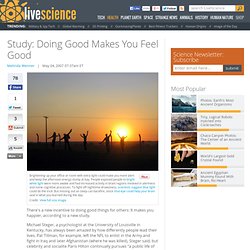 Why People Play Games. XEODesign. 4k2f.jpg (4800×4800) Fair play (only opens in new tab) Maximizers and Satisfiers (satisfaction through making do) The large points first: Most happiness researchers agree that being surrounded by friends and family is one of the most crucial determinants of our well-being. 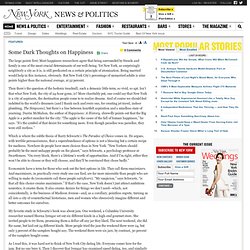 Yet New York, as surprisingly neighborly a city as it is, is still predicated on a certain principle of atomization. Being married would help in this instance, obviously. But New York City’s percentage of unmarried adults is nine points higher than the national average, at 52 percent. Then there’s the question of the hedonic treadmill, such a demonic little term, so vivid, so apt. Simon Sinek: How great leaders inspire action. Badges vs meaningful story.