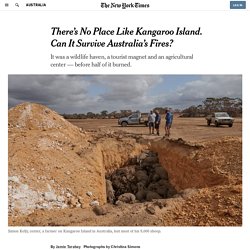 It is a wildlife haven, with its own varieties of kangaroos, echidnas (a spiny anteater) and cockatoos, as well as a koala population seen as insurance should disaster strike the species on the mainland. It is a tourism magnet, with luxury cliff-top lodges and beaches studded with sea lions. It is a farming hub, producing veal, wool, grain and honey for purveyors at home and beyond. Now, Kangaroo Island is unrecognizable. Wildfires that burned for weeks consumed half of the island — more than 800 square miles. “Everything is dead,” said Simon Kelly, a farmer who lost more than half of his 9,000 sheep and was burying them in mass graves. In this season of unimaginable infernos in Australia, perhaps no place is facing more daunting questions about its future than Kangaroo Island.

Everyone here knows that without both industries, the community cannot survive. Mr. Not long before the fires, Mr. Mr. Beekeeper blamed for sparking massive Australian fire. One of the latest wildfires to ravage Australia was accidentally sparked by a careless beekeeper, according to new reports. 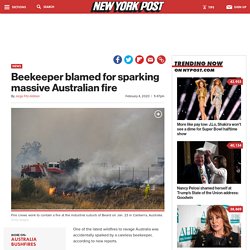 The blaze was kicked up in the Pialligo Redwood Forest in Australia’s Capital Territory on Jan. 22 when a beekeeper’s “smoker” — a device used to keep bees calm — ignited the dry brush, the Australian Broadcasting Corporation reported. The fire has since shut down the local airport and threatened to engulf homes and businesses in nearby suburbs in the Canberra region. 'Overreaction': China students stuck as Australia closes border.

Canberra, Australia - More than half the Chinese students enrolled in Australian universities have found themselves stranded in their home country with a new academic year looming after the Australian government imposed a travel ban in response to the coronavirus outbreak. 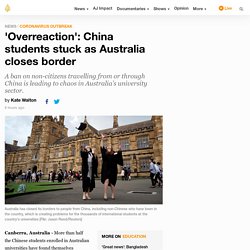 The new term begins in late February at most tertiary institutions and while many new students were expected to arrive in the next couple of weeks for orientation, existing students had returned home for the Lunar New Year. "Out of 200,000 Chinese international students studying in Australia, 107,000 are still offshore," said Phil Honeywood, chief executive of the International Education Association of Australia and chair of the International Education Global Reputation taskforce.

"Australia is on the front line of dealing with the [coronavirus] outbreak because of our geographical location and our earlier academic year start date," Honeywood said. More: Ban imposed this month 'An overreaction' Students unconvinced. Morning mail: Australian coronavirus cases hit 13, Iowa poll chaos, fish rescue. Good morning, this is Helen Sullivan bringing you the main stories and must-reads on Wednesday 5 February. 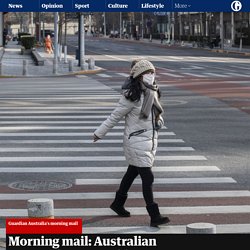 Top stories An eight-year-old boy has become the 13th confirmed case of coronavirus in Australia, as the government prepares to evacuate more Australian nationals from Wuhan. The boy is the youngest infected in Australia so far, and a Chinese citizen and from Wuhan. He was travelling in a group with a 44-year-old man and a 42-year-old woman who have been confirmed as Queensland’s other cases of coronavirus. The child remains in isolation at the Gold Coast University hospital in a stable condition.

Facebook has failed to stop a coordinated far-right operation profiting from disinformation and anti-Islamic hate almost two months after it was publicly exposed. Democrats are heading to New Hampshire with no frontrunner after the Iowa debacle. Scientists are racing to save endangered fish from bushfire ash. Australia Global heating is a serious threat to the world’s climate refuges. Australia fires: British firefighters to assist with clean-up. Image copyright Steve James A group of about 300 serving and retired firefighters are heading to Australia to help rebuild communities hit by bushfires. 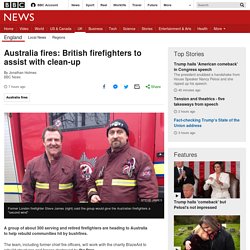 The team, including former chief fire officers, will work with the charity BlazeAid to rebuild structures and fences destroyed by the fires. Organiser Steve James said the group would help wherever they could. "We need to do some good for them, it would give them a second wind knowing we've come so far," he said. Former London firefighter Mr James runs Tunnel to Towers UK (T2T), a charity event inspired by an American firefighter who died in the 9/11 attacks in New York in 2001.

He made the requests for help through T2T and eventually saw 1,250 firefighters volunteer to help from across Britain. Media playback is unsupported on your device An airline has offered free return seats to Australia for all of the volunteers. At least 33 people have been killed in the fires and four of those were local firefighters. 'Well-meaning professionals'