Executive Producer. The lowdown Being responsible for the overall quality control and success of TV productionsEnsuring that television programmes conform to commissioners' specifications Is this role right for me? 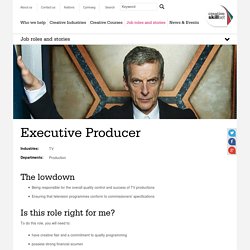 Location manager job profile. Location managers are responsible for making all the practical arrangements for locations used for film, television or photographic shoots outside the studio. 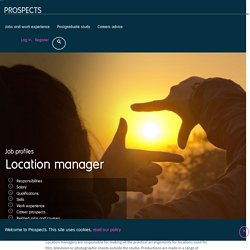 Productions are made in a range of places and location managers need to research, identify and organise access to appropriate sites. As well as arranging and negotiating site use, the role usually includes managing sites throughout the shooting process. This involves working to strict budgetary and time limits and maintaining a high standard of health and safety and security. The demands of organising crews and dealing with a variety of people make this an intense and varied role. Make-up artist job profile. A make-up artist ensures that models, performers and presenters have suitable make-up and hairstyles before they appear in front of cameras or an audience. 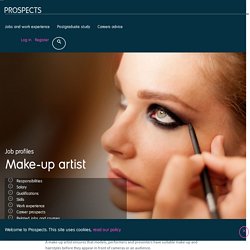 This may be in a variety of settings, including: film;television;theatre;live music;photographic shoots. Make-up artists interpret the make-up requirements of clients to produce both a creative and technically accurate visual representation. This may involve very basic make-up for a TV presenter through to more complex period make-up or special effects. Make-up artist job information. Page Content Make-up artist. 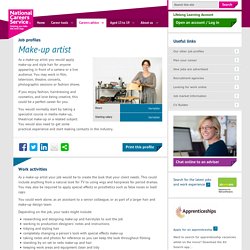 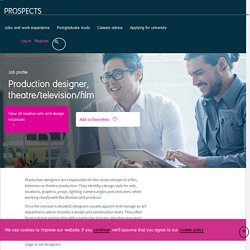 They identify a design style for sets, locations, graphics, props, lighting, camera angles and costumes, while working closely with the director and producer. Once the concept is decided, designers usually appoint and manage an art department, which includes a design and construction team. They often form a strong partnership with a particular director, who they may work with on many productions. Programme researcher, broadcasting/film/video job profile. A programme researcher provides support to the producer and production team. 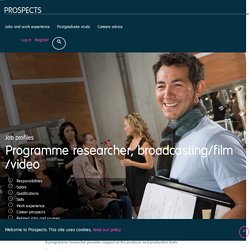 A researcher: contributes ideas for programmes;sources contacts and contributors;collects, verifies and prepares information for film, television and radio productions. They can work on a wide variety of programmes or within one subject area. The work involves organising, planning and researching everything that will happen during the programme such as who will be interviewed, the location, if the film crew will fit, if the budget will stretch. The researcher has a responsibility for fact checking, writing briefs for presenters and ensuring that there is adherence to appropriate legislation relating to the production. 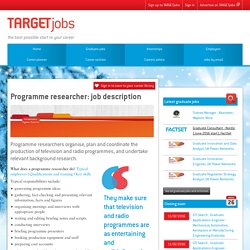 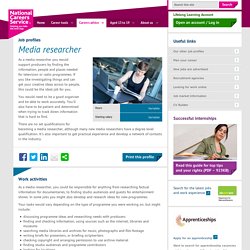 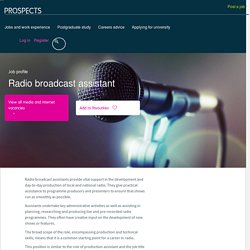 They give practical assistance to programme producers and presenters to ensure that shows run as smoothly as possible. Assistants undertake key administrative activities as well as assisting in planning, researching and producing live and pre-recorded radio programmes. They often have creative input on the development of new shows or features. The broad scope of the role, encompassing production and technical skills, means that it is a common starting point for a career in radio.

This position is similar to the role of production assistant and the job title may depend on whether you're working for the BBC or commercial sector, national or local radio. Responsibilities. Radio producer job profile. Radio producers are responsible for the audio content of broadcasts via radio, the internet and other mobile platforms. 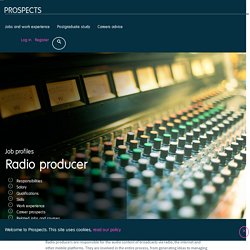 They are involved in the entire process, from generating ideas to managing the audience response after a programme. Producers manage and work with broadcasting assistants, presenters and DJs, engineers and IT staff. They have to make sure that shows run as planned and that they are tailored to key audience demographics. They may also be responsible for the business and commercial management of a programme. Producers can work in the publicly funded, commercial or voluntary sectors of broadcasting. Runner, broadcasting/film/video job profile. Fierce competition for entry-level positions means work experience is vital so you need to make speculative applications, network and be persistent A runner is an entry-level position, the most junior role in the production department of a broadcast, film or video company. As a runner, you'll act as a general assistant, working under the direction of the producer and other production staff, to undertake whatever basic tasks are required to ensure the smooth running of the production process.

This role offers the opportunity to gain vital experience and knowledge of the production process, offering valuable networking opportunities, and is often seen as the first step on the ladder for people aspiring to roles in broadcasting media. Tv production runner Job Information. Page Content TV production runner HoursVariableStarting salaryVariable As a runner in the film and TV industry, you would work behind the scenes and do any small jobs and basic tasks necessary to help the production run smoothly. If you want to take a first step into a media career, and you are willing to turn your hand to any task that needs doing, this job could be ideal for you.

You’ll need to have the communication skills to develop good working relationships with people at all levels working on the production. There is no set entry route into this job. WorkDesc. Television floor manager job profile. Television floor managers make sure that sets, props and technical equipment are safe, ready to use and in the right position prior to filming. They have a liaising and coordinating role, acting as the link between the director and the many people involved in a production on the studio floor.

It is the floor manager's responsibility to pass on cues to presenters and guests to ensure timings are met and the broadcast goes smoothly. They make sure that events go according to a set plan and that people taking part know their particular roles and how it fits in with whatever else is happening. The work is mainly studio-based, but may also include outside broadcasts, depending on the production. Responsibilities. Television/film/video producer job profile. Producers play an integral role in the television, film and video industries. A producer will oversee each project from conception to completion and may also be involved in the marketing and distribution processes.

Producers work closely with the directors and other production staff on a shoot. Increasingly, they need to have directing skills as they may be the director and be in charge of all project operations. TV or film producer job information. Page Content. Production Manager (TV) - Creative Job Roles. The lowdown. A Day In The Life Of A Rich Media Production Manager. Television production coordinator job profile. Television production assistant: job description. TV or film assistant director job information. TV/film/theatre set designer: job description. Costume design. Whichtvjobforme.

How I got my job: Film Producer. Jonny Paterson graduated with a degree in English Literature and History (Joint Honours) in 2010. Careers in the digital industry: Not just about the tech. Think digital careers are just for ‘techy’ people? Think again. Digital now impacts on every area of life and is creating lots of opportunities in various roles across all sectors. University of Leeds Careers Centre Blog. Want to get in to the Media industry? Terrified by the competitive nature of it? MediaPublishingJournalism BroadcastingTechnical. Leeds University Library /All Locations.

Why choose a career in TV production? Many people dream of being on television, but the experience of working behind the camera is often equally as thrilling. TV - Creative Industry. Y5 RUNNER TIPS DOC nov2011. How to write your CV. Your CV is all about marketing you to a potential employer. Unlike other industries where human resources staff are employed to read through and shortlist applications, your CV could arrive directly on the desk of the person with the power to give you a job. Y5 WritingaCV.