Theatre director job profile. A theatre director has responsibility for the overall practical and creative interpretation of a dramatic script or musical score. 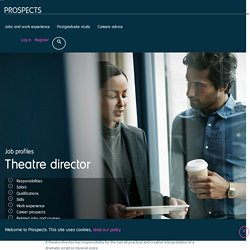 They are involved in the whole process, from the design and pre-production stages, right through to the final performance. Directors work closely with their creative and production teams, the performers and the producer to create a performance which connects with the audience. They therefore need to be able to coordinate effectively across a range of disciplines and with artistic vision. Most directors are usually employed on a freelance or fixed-term contract basis. They can be employed as artistic or resident directors in repertory companies. Y6 Equity TheatreDirector. Theatre manager job profile.

Stage manager Job Information. Page Content Stage manager HoursVariableStarting salary£18,000 + per year A stage manager makes sure all the sets, equipment and props are ready for the opening of a performance. 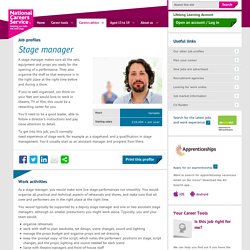 Y6 Equity stagemanagement. Stagehand Job Information. Page Content Stagehand HoursVariableStarting salary£14,000 + per year Stagehands, or stage technicians, help to get things ready on set for performances in the theatre, at concerts and in TV/film studios. 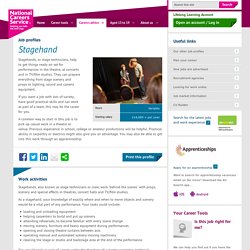 They can prepare everything from stage scenery and props to lighting, sound and camera equipment. If you want a job with lots of variety, have good practical skills and can work as part of a team, this may be the career for you. A common way to start in this job is to pick up casual work in a theatre or venue. WorkDesc Work activities Stagehands, also known as stage technicians or crew, work 'behind the scenes' with props, scenery and special effects in theatres, concert halls and TV/film studios. TV/film/theatre set designer: job description. What does a set designer do? 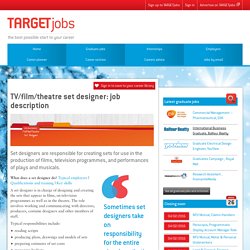 Typical employers | Qualifications and training | Key skills A set designer is in charge of designing and creating the sets that appear in films, on television programmes as well as in the theatre. The role involves working and communicating with directors, producers, costume designers and other members of staff. Typical responsibilities include: Y6 Equity Theatredesigner. Y6 Equity LightingDesigner. 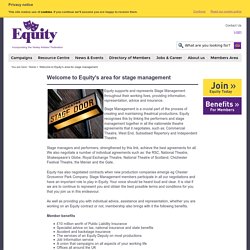 Stage Management is a crucial part of the process of creating and maintaining theatrical productions. Equity recognises this by linking the performers and stage management together in all the nationwide theatre agreements that it negotiates, such as: Commercial Theatre, West End, Subsidised Repertory and Independent Theatre. Stage managers and performers, strengthened by this link, achieve the best agreements for all. 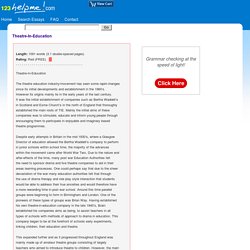 However its origins mainly lie in the early years of the last century. It was the initial establishment of companies such as Bertha Waddell’s in Scotland and Esme Church’s in the north of England that thoroughly established the main roots of TIE. Mainly the initial aims of these companies was to stimulate, educate and inform young people through encouraging them to participate in enjoyable and imaginary based theatre programmes. Despite early attempts in Britain in the mid 1930’s, where a Glasgow Director of education allowed the Bertha Waddell’s company to perform in junior schools within school time, the majority of the advances within the movement came after World War Two. Theatre in Education - Drama. Y6 Theatre in Education. Yorkshire What to See and Do Guide, Northern England. Yorkshire is big and beautiful country. 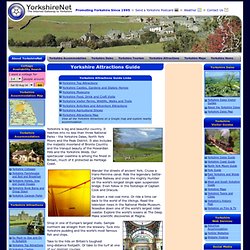 It reaches into no less than three National Parks - the Yorkshire Dales, North York Moors and the Peak District. It also includes the majestic moorland of Bronte Country and the tranquil beauty of the Howardian Hills and the Yorkshire Wolds. Our spectacular coastline is among the finest in Britain, much of it protected as Heritage Coast. Wander the streets of ancient York. Cruise a trans-Pennine canal. Go down a real coal mine. Shop in one of Europe’s largest malls. Take to the hills on Britain’s toughest long-distance footpath. It’s no surprise that Yorkshire is proud of its past and a sense of history is never far away. Cf2d39883ed11eabda225ee8dfe99a7f. Production & Support. Academy Class production training courses will show you the complete solution for creating, distributing, and monetizing video — on air, onscreen, and on device From planning to playback, Academy Class delivers a complete solution for creating and distributing video content. 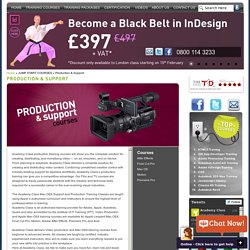 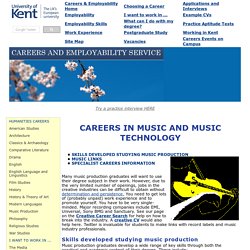 However, due to the very limited number of openings, jobs in the creative industries can be difficult to obtain without determination and persistence. You need to get lots of (probably unpaid) work experience and to promote yourself. You have to be very single-minded. Major recording companies include EMI, Universal, Sony BMG and Sanctuary. See our page on the Creative Career Search for help on how to break into the industry. Skills developed studying music production Music production graduates develop a wide range of key skills through both the practical and academic content of their degree. Music Technology: expertise with sound technology and electronics, good hearing and an ear for music.