How PLCs Work. A programmable logic controller is a specialized computer used to control machines and processes. 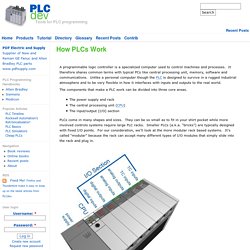 It therefore shares common terms with typical PCs like central processing unit, memory, software and communications. Unlike a personal computer though the PLC is designed to survive in a rugged industrial atmosphere and to be very flexible in how it interfaces with inputs and outputs to the real world. The components that make a PLC work can be divided into three core areas. The power supply and rackThe central processing unit (CPU)The input/output (I/O) section PLCs come in many shapes and sizes. The Power Supply and Rack So let’s start off by removing all our modules which leaves us with a naked PLC with only the power supply and the rack.

The rack is the component that holds everything together. The CPU The brain of the whole PLC is the CPU module. The CPU consists of a microprocessor, memory chip and other integrated circuits to control logic, monitoring and communications. I/O System Inputs.

How do relays work? - Explain that Stuff! Advertisement by Chris Woodford. 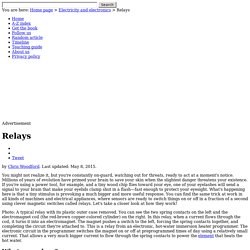 Last updated: May 8, 2015. You might not realize it, but you're constantly on-guard, watching out for threats, ready to act at a moment's notice. Millions of years of evolution have primed your brain to save your skin when the slightest danger threatens your existence. If you're using a power tool, for example, and a tiny wood chip flies toward your eye, one of your eyelashes will send a signal to your brain that make your eyelids clamp shut in a flash—fast enough to protect your eyesight.

How do diodes and light-emitting diodes (LEDs) work? By Chris Woodford. 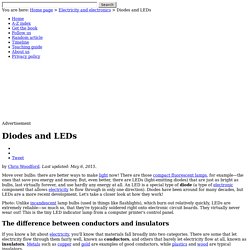 Last updated: May 6, 2015. Move over bulbs: there are better ways to make light now! There are those compact fluorescent lamps, for example—the ones that save you energy and money. But, even better, there are LEDs (light-emitting diodes) that are just as bright as bulbs, last virtually forever, and use hardly any energy at all. How do capacitors work? - Explain that Stuff. By Chris Woodford. 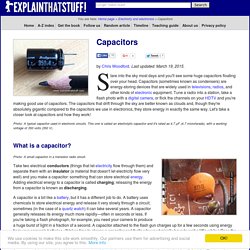 Last updated: March 19, 2015. Stare into the sky most days and you'll see some huge capacitors floating over your head. Capacitors (sometimes known as condensers) are energy-storing devices that are widely used in televisions, radios, and other kinds of electronic equipment. Tune a radio into a station, take a flash photo with a digital camera, or flick the channels on your HDTV and you're making good use of capacitors. How do transistors work? - Explain that Stuff. By Chris Woodford. 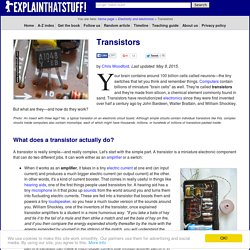 Last updated: May 9, 2015. Your brain contains around 100 billion cells called neurons—the tiny switches that let you think and remember things. Computers contain billions of miniature "brain cells" as well. They're called transistors and they're made from silicon, a chemical element commonly found in sand. Transistors have revolutionized electronics since they were first invented over half a century ago by John Bardeen, Walter Brattain, and William Shockley. Photo: An insect with three legs? What does a transistor actually do? A transistor is really simple—and really complex.

When it works as an amplifier, it takes in a tiny electric current at one end (an input current) and produces a much bigger electric current (an output current) at the other. Photo: Compact hearing aids were among the first applications for transistors—and this one dates from about the late 1950s or 1960s. Electronics Components: How the 555 Timer Chip Works. The 555 is a single-chip version of a commonly used circuit called a multivibrator, which is useful in a wide variety of electronic circuits. 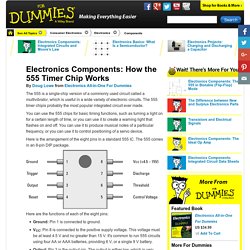