Le Bureau coworking and shared office space in Stockwell, Lambeth, Wandsworth and London are designed for entrepreneurs to collaborate freely.

NOMINATE A LOCAL HERO FOR THE WANDSWORTH CIVIC AWARDS. When Bonnie Tyler famously sung about her need for a hero, she forgot to mention that as well as being strong, fast and fresh from the fight, they should also be from Wandsworth. 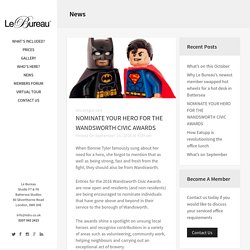 Entries for the 2016 Wandsworth Civic Awards are now open and residents (and non-residents) are being encouraged to nominate individuals that have gone above and beyond in their service to the borough of Wandsworth. The awards shine a spotlight on unsung local heroes and recognise contributions in a variety of areas such as volunteering, community work, helping neighbours and carrying out an exceptional act of bravery. The Le Bureau co-work space seeks to have a positive impact in Wandsworth and the surrounding areas, both through its affiliation with local organisations and its members charitable efforts.

In the past few months alone, members have walked, cycled and baked their way to incredible fundraising targets. Why one entrepreneur swapped hot wheels for a hot desk in Battersea. The World’s Greatest Planet on Earth. Fun Palaces is hosting a series of pop up events. What's going on in south London this October? The days are getting colder and the nights are drawing in but with so much happening in south London this October, you won’t want to stay in. 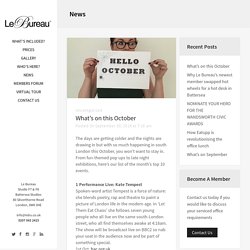 From fun-themed pop ups to late night exhibitions, here’s our list of the month’s top 10 events. 1 Performance Live: Kate Tempest Spoken-word artist Tempest is a force of nature: she blends poetry, rap and theatre to paint a picture of London life in the modern age. In ‘Let Them Eat Chaos’ she follows seven young people who all live on the same south-London street, who all find themselves awake at 4:18am. What's going on in south London this October? How Eatupp is revolutionising the office lunch - Le Bureau. If your lunch is getting increasingly lacklustre, you need to know about Eatupp, an innovative food delivery service that is changing the way busy Londoners fuel their day. 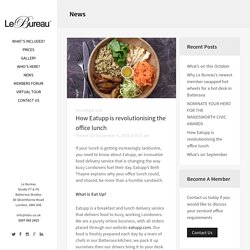 Eatupp’s Beth Thayne explains why your office lunch could, and should, be more than a humble sandwich. What is Eat Up? Eatupp is a breakfast and lunch delivery service that delivers food to busy, working Londoners. Lebu.co. Hey September, good to see you! 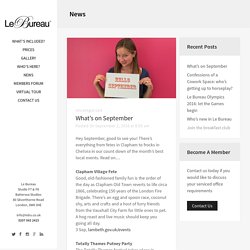 There’s everything from fetes in Clapham to frocks in Chelsea in our count down of the month’s best local events. Read on… Clapham Village Fete Good, old-fashioned family fun is the order of the day as Clapham Old Town reverts to life circa 1866, celebrating 150 years of the London Fire Brigade. Confessions of a Cowork Space: who’s getting up to horseplay? Le Bureau Olympics 2016: let the Games begin - Le Bureau. After four, long years, it was finally here. 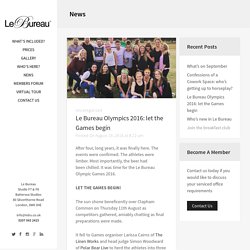 The events were confirmed. The athletes were limber. Most importantly, the beer had been chilled. It was time for the Le Bureau Olympic Games 2016. The sun shone beneficently over Clapham Common on Thursday 11th August as competitors gathered, amiably chatting as final preparations were made. It fell to Games organiser Larissa Cairns of The Linen Works and head judge Simon Woodward of Polar Bear Live to herd the athletes into three teams: the Believers, The LinCredibles and Everyone Else. 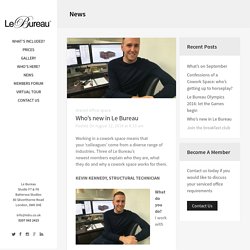 Three of Le Bureau’s newest members explain who they are, what they do and why a cowork space works for them. What do you do? I work with construction engineering consultancies, essentially as an outsourcing tool, doing their 3D modelling and 2D drafting. I work on all sorts of different construction projects; it ranges from anything like mapping steel and concrete frames in 3D to planning submissions. Join the breakfast club - Le Bureau. Want a cowork space in Lambeth, but don’t know which one to choose? 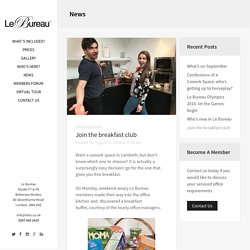 It is actually a surprisingly easy decision: go for the one that gives you free breakfast. On Monday, weekend-weary Le Bureau members made their way into the office kitchen and discovered a breakfast buffet, courtesy of the lovely office managers. Hot stuff. One of the best things about hot desking in Battersea is that when you walk to work, the air smells like toast. 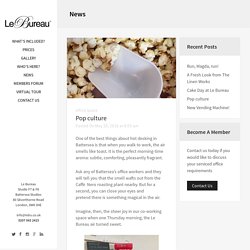 It is the perfect morning-time aroma: subtle, comforting, pleasantly fragrant. Ask any of Battersea’s office workers and they will tell you that the smell wafts out from the Caffè Nero roasting plant nearby. New Vending Machine! - Le Bureau. Why pensions are big news for small business - Le Bureau. The recent changes to pensions are set to have biggest impact on the way we save for our retirement in the last 25 years. 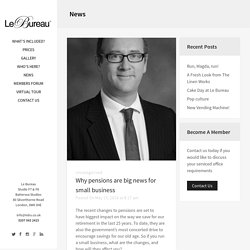 To date, they are also the government’s most concerted drive to encourage savings for our old age. So if you run a small business, what are the changes, and how will they affect you? The UK government is facing a crisis. The combination of a workforce that’s set to live longer than ever, and fewer employed contributors paying National Insurance, makes the government increasingly impotent to meet demand for a state-dependent pension scheme. The government hopes to combat the problem with the introduction of Auto Enrolment. Run, Magda, run! - Le Bureau. Not content with being a manager supremo in our shared Battersea office, Magda is donning her trainers for the very first time to raise money for Cancer Research UK. 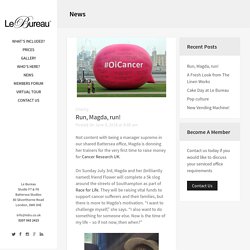 On Sunday July 3rd, Magda and her (brilliantly named) friend Flower will complete a 5k slog around the streets of Southampton as part of Race for Life. They will be raising vital funds to support cancer sufferers and their families, but there is more to Magda’s motivation. “I want to challenge myself,” she says. “I also want to do something for someone else. Now is the time of my life – so if not now, then when?” Training is well underway.

The next step is to go shopping and spend a small fortune on neon pink kit… More than eight million women have taken part in Race for Life since it began 20 years ago, raising over £547 million to fund research into two hundred different types of cancer affecting men, women and children. Back to Blog. Piece of cake. Le Bureau members are a talented bunch. Office workspace in Wandsworth, London. Temp office London Lambeth Wandsworth. Le Bureau Beautiful Serviced Offices in London. Le Bureau Shared Office Space in London. What’s On: July - Le Bureau. From street parties to rock-fests and some pre-Edinburgh laughs, swap your hot desk for the hottest events around Battersea this July Wimbledon Forget your Glastos and keep your garden parties; July means one thing, and that’s Wimbledon. Battersea decides - Le Bureau.