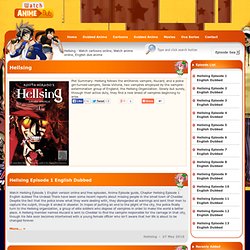 Anime Episode guide, Chapter Hellsing Episode 11 English dubbed Transcend Force Integra Hellsing is still recovering from her wounds, though to make matters worse; there have been several attempts to take the Queen’s life in recent days. The Royal Knights of the Round Table decide to hold a conference, though Integra cannot attend due to her wounds. However, when Integra receives the word that the Queen will be coming to Hellsing headquarters to hold a secret ceremony with her, she sends her soldiers to the Tower of London in an attempt to trick those responsible for the attacks into falling into a trap. Meanwhile, Seras Victoria has been deployed into another unit within Hellsing and she is trying to figure out why she is seeing some strange visions, though when she goes to meet with an acquaintance, something occurs that puts all of their preparation into jeopardy. 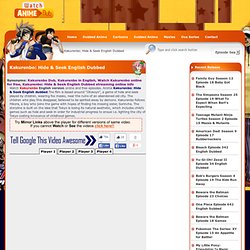 Anime Kakurenbo: Hide & Seek English dubbed.The film is based around “Otokoyo”, a game of hide and seek played by children, wearing fox masks, near the ruins of an abandoned old city. The children who play this disappear, believed to be spirited away by demons. Kakurenbo follows Hikora, a boy who joins the game with hopes of finding his missing sister, Sorincha. Digimon The Movie. Totally Spies. Justice League Unlimited. Justice League Season 1 Episode 1.