Mandarin Chinese Tones - CCHATTY. As there are possible sound changes resulted from the sound context, there may also be some changes in the tones of Chinese that are caused by the tones of the preceding or succeeding words. 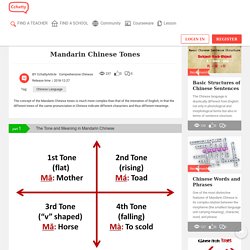 This kind of change occurs when the original tones of two directly connected words are hard to keep in the fast and natural flow of speech, or other words when one tone affect another in the natureral flow. Mandarin Chinese is rich in tone sandhi phenomena, in spite of the general rule that a certain tone is usually fixed for every character's pronunciation. For people who have already learned Chinese to such a level as to be able to speak it with some fluency, the change of tones in context may come naturally, for the phenomenon itself is rooted in the fact that sounds and tones are all used with the least effort, without a break. For beginners, however, it is certainly necessary to learn and remember the basic rules that govern the changes. 1. Group 1: Repetition Light Tone A. 试试 shi4shi Have a try. Basic Structures of Chinese Sentences - CCHATTY.

The predicate, one of the two main component parts of a sentence in traditional grammar, can take various forms in Chinese, simple or complicated. 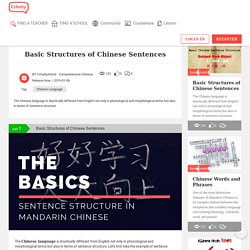 It has some distinctive features that differ from English, such as the omission of the verb, the use of a series of verbs (or verbal chain) and the "verb + object + verb" structure (or "pivot structure). It should also be noted that the Chinese verbs don't change in form but take certain other words to express the differences in tense and aspect. 1. Nominal Predicate The nominal predicate is a special phenomenon in contrast to English sentence structure, for it directly follows the subject without any verbs, although verbs could be inserted, with little significant changes in the meaning. 1) 今天阴天。 WFW: Today overcast.

FI: It's overcast today. 2) 明天国庆节。 WFW: Tomorrow National Day. FI: Tomorrow will be the National Day. Chinese Words and Phrases - CCHATTY. One of the most distinctive features of Mandarin Chinese is its complex relationship between the morpheme (the smallest language unit carrying meaning), character, word, and phrase. 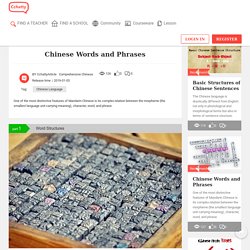 For one thing, a Chinese morpheme is usually represented in one character (or one syllable) which may be a word in itself or just a part of a word. This is to say: a word may consist of one, two, or more characters; and although a word can usually be decomposed into its components or basic elements, there are cases in which several characters are taken together as one morpheme that refuses analysis of its constructs. An Overview of the Chinese Language - CCHATTY. Although the origin of human languages is difficult to trace, the beginning of writing may be relatively clear, at least for some of them that are supported with more evidence found in archaeological excavations. 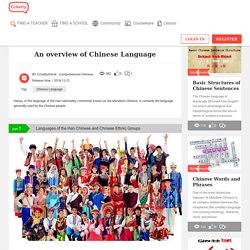 As for the origin of Chinese characters, in particular, it is also frequently told as legends and thus just taken as such rather than hard facts. Among various sayings, such as "tie knots," the "eight diagrams," "picture," the legendary story about Cang Jie inventing the characters is most wide-spread and often appears in many books. According to historical records, Cang Jie was said to be the grand scribe of the legendary Yellow Emperor, the supposed foremost ancestor of the Chinese Han people. And it was said that the creation of the Chinese characters was such a shocking event that "the heaven rained grains and ghosts cried at night" while he was making them. Pinyin - Phonology of Mandarin Chinese - CCHATTY. "Sandhi", a word from Sanskrit, originally means "join". 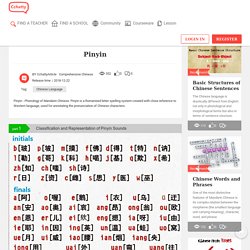 In the analysis of spoken language, it refers to the change in pronunciation of some sounds that occurs when spoken in connection with other sounds. In Mandarin Chinese, a language with tones, this kind of change can be observed in both pronunciation and tones. Here we will first introduce the change of pronunciation and leave the tonal change in the next chapter that exclusively and systematically deals with the tones. There are mainly two categories of sound sandhi in the pronunciation of Mandarin Chinese, namely the change of "a"(啊) and the so-called Er-Hua change. The first occurs when "啊" is preceded by a syllable with an ending that can influence its pronunciation. 1, Change of "a” (啊) The exclamatory “阿" (represented in Pinyin as the final sound sign "a") has no substantial meaning except showing a strong emotion. 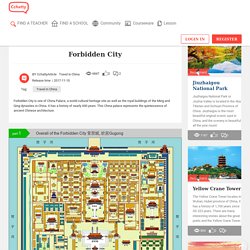 The China Palace must have been built by skilled craftsmen from all over the country. And these materials are the best things in the country. Woods: To build these main halls, the most needed would be wood. Stepping into Taihe Hall of the China Palace, there are 72 massive pillars. These pillars are very spectacular. Learning Chinese. Best green tea is Longjing tea - Chinese tea – CCHATTY. March and April each year, the new tea comes into the market; early spring tea of Longjing also enters into the tea-plucking period. 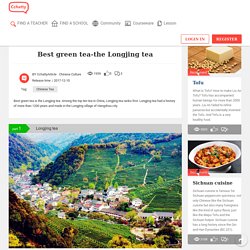 The tea plucked before Qingming Festival in Longjing, its price of 4,800 USD/500g, it is the best green tea. However, after Qingming Festival, tea price falling fast. Traditional Chinese Marriage – Chinese culture – CCHATTY. In ancient times, it was essential to follow a fundamental principle of the “Three Letters (三书) and Six Etiquettes (六礼), for they were necessary to marriage. 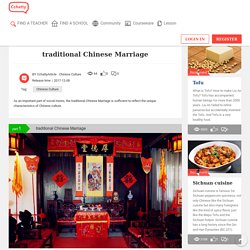 Three Letters The "Three Letters" includes the Betrothal Letter (聘书), Gift Letter (礼书) and Wedding Letter (迎亲书).The Betrothal Letter is the formal document of the engagement, a must in marriage. Next is the Gift Letter, which would be given to the identified girl’s family. What is Tofu and How to Make Tofu - CCHATTY. More than 2000 years ago, the smoke of war in Huainan just receded, and China’s territory developed towards unification once again. 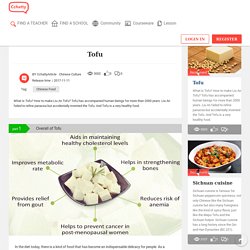 The powerful Han Dynasty started to be established. Jiangxi Cuisine - Article China - CCHATTY. Four Stars Looking at the Moon is a famous dish in Xingguo. 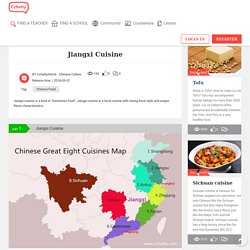 Speaking of this recipe, it is well-known in Xingguo. Before decades years ago, Mao Zedong named the food name. In the spring of 1929, Xingguo Rid by Communist Party of China won a victory; meanwhile, Mao Zedong and Zhu De also led Fourth Red Army to Xingguo for rest and reorganization after breaking encircling and suppress of Kuomintang army. Traditional Chinese Medicine - Chinese culture - CCHATTY. Yin and Yang are a pair of opposite and complementary forces. Chinese philosophers first wrote about Yin and Yang regarding the environment in the early 4th century B. C.. Yin is associated with everything dark, moist, receptive and earthy, and Yang is bright, dry, active and heavenly. Chinese doctors believe that diseases result in Yin and Yang from imbalances in Yin and Yang within the body.

Drugs and other treatments are intended to restore this balance. Animal Related Chinese Words - Chinese language - CCHATTY. The origin of Chinese characters – CCHATTY. Finding out the true origins of Chinese characters is vital for a true understanding of their evolution, development, and application. Archaeological discoveries give us a window through which we can look back in time to the era when Chinese characters were first used. Carved and Painted Pottery Symbols In ancient times the Chinese people carved and painted many symbols on pottery. These carved and painted symbols provide the most important materials from which scholars have been able to research the origin of Chinese characters. The symbols principally consist of two kinds: geometric and image-based symbols. Geometric Symbols. Chinese Characters – Articles – CCHATTY. Oracle Bone Inscription 甲骨文 The oldest Chinese inscriptions are the Oracle bone script 甲骨文(BC.14-11).

Most of Oracle Bone Inscription are divination records, engraved on the tortoise shells or animal bones. It found about 150,000 pieces of bone, more than 4,500 words. Learn Chinese Characters & Language Course. 12 Tips How to Learn Chinese - CCHATTY. Chinese characters, which have a history of more than 3,000 years, are very ancient and are the only Ideographic Characters used in the world. Other words are Phonetic Characters. Ideographic Characters is a kind of writing system that uses symbolic symbols to record words or morphemes, not directly or simply to express syllables.