How To Have An Energy Orgasm: A Step-By-Step Guide. The basic idea behind the energy orgasm is that we all have this potent stream of Eros within us, this sexual, creative, life force energy flowing and animating our being at all times. 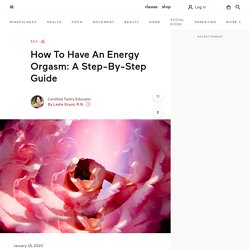 This flow is literally available to us continuously, but unfortunately, it's currently not socially acceptable to fall into an orgasmic swoon in public at any time of the day or night, so we generally hold our energy systems kind of tightly and keep our minds firmly in control of the situation. Due to a variety of factors, the vast majority of people only know how to access orgasmic energy when their genitals are being stimulated, with some requiring greater levels of stimulation than others to get to that place of energetic expansion and flow. (For some it is still frustratingly difficult to access orgasmic energy even with physical stimulation, possibly because the mind is stubbornly clinging on too tightly.

Pelvic floor muscle relaxation. ISTA. (2) Orgasm as Healing: Sasha Cobra. (2) Is Sexual The Same As Spiritual Energy? Ask Deepak Chopra! Anima in Men: Integrating the Feminine Within - A Different Perspective - Medium. Carl Jung paid a lot of attention to a man’s second half of life, during which man has the opportunity to examine his repressed, inferior, feminine side. 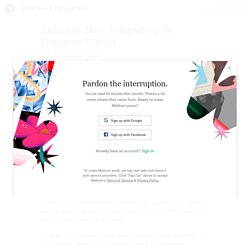 Jung called this archetypal state the anima, which he considered of paramount practical importance to the psychotherapist. He writes that this Latin term anima should not be confused “with any dogmatic Christian idea of the soul.” We have encountered the anima historically in the male-female pairing of deities, in primitive mythology, and in Chinese philosophy where the cosmic pairing of concepts is designated yin (feminine) and yang (masculine). Jung writes that we can safely assert that these opposites are universal in the psychologies of men and women. And we can reasonably conclude that man’s imagination is so bound by this motif that he was largely compelled to project it again and again, at all times and in all places.

“I am following a beautiful woman dressed in white linen or silk riding a bike with upright handlebars. Media — Sasha Cobra. (2) Monogamy, Polygamy, Polyamory? The Anima « The Third Eve. I wrote earlier about archetypes and their function, briefly touching upon the anima and animus. 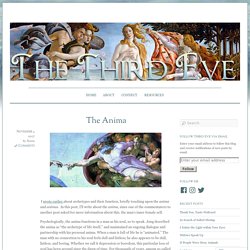 In this post, I’ll write about the anima, since one of the commentators to another post asked for more information about this, the man’s inner female self. Psychologically, the anima functions in a man as his soul, so to speak. Jung described the anima as “the archetype of life itself,” and maintained an ongoing dialogue and partnership with his personal anima. When a man is full of life he is “animated.” The man with no connection to his soul feels dull and listless; he also appears to be dull, listless, and boring. This inner feminine often appears in a man’s dreams about the same time as his shadow self appears. The anima personifies all the feminine psychological tendencies within the man, such as prophetic hunches, intuitions, moods, receptivity, capacity for personal love, a feeling for nature, and his relation to the unconscious. Stages of Anima Development.

Anima and Animus: How to Harmonize Your Masculine and Feminine Energies. Hardwired for bliss – Candace Pert, PhD. The following article is adapted from a talk given by Dr. 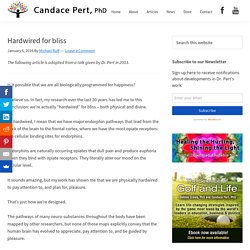 Pert in 2003. Is it possible that we are all biologically programmed for happiness? I believe so. In fact, my research over the last 30 years has led me to this conclusion: we’re actually “hardwired” for bliss – both physical and divine. By hardwired, I mean that we have major endorphin pathways that lead from the back of the brain to the frontal cortex, where we have the most opiate receptors: the cellular binding sites for endorphins. Endorphins are naturally occurring opiates that dull pain and produce euphoria when they bind with opiate receptors. Explorer of the Brain, Bodymind & Beyond – Candace Pert, PhD. (2) What Men Crave.