DIIV Share New Track "Bent (Roi's Song)" Photo by Trent Maxwell Earlier this year, DIIV announced that they would release sophomore album Is the Is Are in the fall via Captured Tracks. 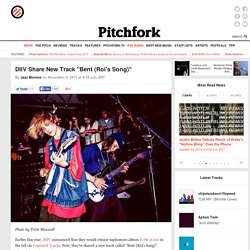 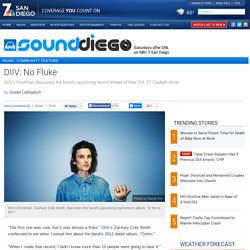 " “The first one was cool, but it was almost a fluke,” DIIV’s Zachary Cole Smith confessed to me when I asked him about the band’s 2012 debut album, “Oshin.” “When I made that record, I didn’t know more than 15 people were going to hear it,” the frontman went on. “My only goal for the band originally was to only play one show that 10 people would go to. And then my goals started to crystalize as it grew, and it became bigger -- but it was really a fluke that the first one came together. Now, I see its flaws.” While artists (or anyone, really) are typically their own harshest critics, you’d be hard-pressed to find any DIIV fan that didn’t instantly fall in love with the record’s effervescent shimmer that mixed chillwave, lo-fi garage rock and soaring shoegaze for an altogether hypnotic effect.

“I’m definitely aware of what makes the first record special to people,” the frontman told me. THE MANY ARRIVALS OF THE VINYL REVIVAL (PART ONE) Revival is an interesting yet loaded word, often banded around like a blazing badge of knowledge on those oh-so-slow news days, furtively filling up column inches with the burdening bandwagon pieces on everything from brewing to baking, crafting to culture. 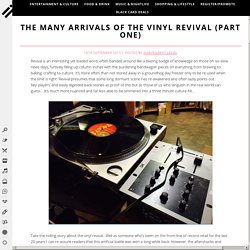 It’s more often than not stored away in a groundhog day freezer only to be re-used when the time is right. Revival presumes that some long dormant scene has re-awakened and often lazily points out ‘key-players’ and easily digested back-stories as proof of this but as those of us who languish in the real world can guess….It’s much more nuanced and far less able to be simmered into a three minute culture-hit… Take the rolling story about the vinyl revival…Well as someone who’s been on the front-line of record retail for the last 20 years I can re-assure readers that this artificial battle was won a long while back.

However, the aftershocks and feints still shudder through the Sunday supplements and lifestyle features of today. Site de découvertes et d'actualités musicales. L&D. Best Coast - California Nights (Audio) Meet Burger Records' Newest Act: Billie Joe Armstrong's Son Jakob Danger. If you really think about it being the offspring of a famous musician ain't all it’s cracked up to be. 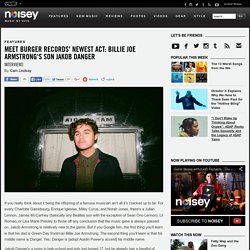 For every Charlotte Gainsbourg, Enrique Iglesias, Miley Cyrus, and Norah Jones, there's a Julian Lennon, James McCartney (basically any Beatles son with the exception of Sean Ono Lennon), Lil Romeo, or Lisa Marie Presley to throw off any conclusion that the music gene is always passed on. Jakob Armstrong is relatively new to the game. But if you Google him, the first thing you’ll learn is that his dad is Green Day frontman Billie Joe Armstrong.

The second thing you’ll learn is that his middle name is Danger. Yes, Danger is [adopt Austin Power’s accent] his middle name. Jakob Danger's a junior in high school and only just turned 17, but he already has a handful of tracks floating around YouTube and Soundcloud that prove his dad’s musical DNA was in fact passed on to him. Noisey: Music really runs in your family. “King of the World” is damn catchy. You’re signed to Burger Records. Trip to Disneyland Paris. Green Aisles by Real Estate. The Neighbourhood - Sweater Weather. Cults - Oh My God. Passion Pit - The Reeling. Black Hills - Gardens And Villa. The Drop - The Neighbourhood's #WIPEDOUT - Part 2.