Ilana Glazer Just Empowered Me in The Weirdest Possible Way. MarinaShutUp. Bulimia Is A B*tch: Losing Control And Finding Freedom  The content of this post may be triggering to some readers. 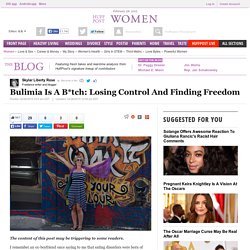 Tummy Pride  By Ellie Herman What caused your eating disorder? 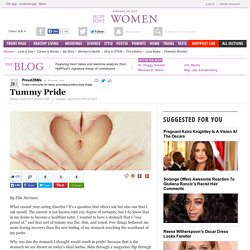 Self-Care 101: What It Is and How to Start. How To Be As Fierce As Olivia Pope In 5 Simple Steps. Teen Girls: Depression, Anger and Powerlessness. This post was originally published on the Huffington Post and is cross-posted with permission. 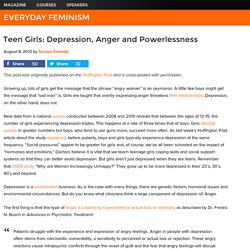 Growing up, lots of girls get the message that the phrase “angry woman” is an oxymoron. A little like boys might get the message that “sad man” is. Girls are taught that overtly expressing anger threatens their relationships. Depression, on the other hand, does not. New data from a national survey conducted between 2008 and 2010 reveals that between the ages of 12-15, the number of girls experiencing depression triples. Depression is a complicated business. The first thing is that this type of anger is caused by a perceived or actual loss or rejection, as described by Dr. Patients struggle with the experience and expression of angry feelings. Learning To Be Myself. I Chose To Live As A Flat Chested Woman After Breast Cancer. Originally published on Role/Reboot. 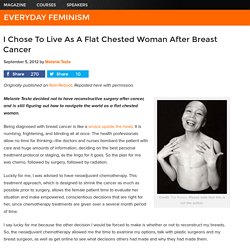 Reposted here with permission. Having a Healthy Diet Out of Love and Not Fear. Dieting. 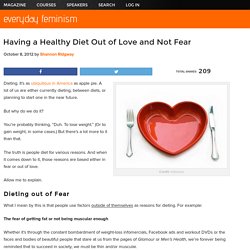 It’s as ubiquitous in America as apple pie. A lot of us are either currently dieting, between diets, or planning to start one in the near future. The Approval of Men. Don't Tell Me To Just Get Over It. Why Make-up Is a Waste of My Time — Everyday Feminism. 8 Ways Feminism Can Improve Your Self-Esteem. Older Now. The Power of Love When Healing from Trauma. 5 Ways To Take Care Of Yourself Today. Cellulite, Rimples, And Dimples - A Beautiful Reality Check. Originally posted on Beauty Redefined and cross-posted here with their permission. 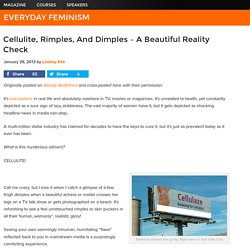 It’s everywhere in real life and absolutely nowhere in TV, movies or magazines. It’s unrelated to health, yet constantly depicted as a sure sign of lazy slobbiness. The vast majority of women have it, but it gets depicted as shocking headline news in media non-stop. A multi-million dollar industry has claimed for decades to have the keys to cure it, but it’s just as prevalent today as it ever has been. What is this mysterious ailment? Edited to protect the guilty. 6 Strategies for Getting Unstuck and Moving Forward in Creating a Life You Love. Do you feel stuck? 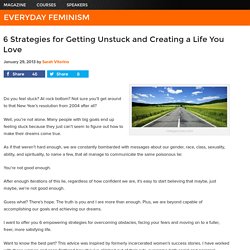 At rock bottom? Not sure you’ll get around to that New Year’s resolution from 2004 after all? Well, you’re not alone. Many people with big goals end up feeling stuck because they just can’t seem to figure out how to make their dreams come true. As if that weren’t hard enough, we are constantly bombarded with messages about our gender, race, class, sexuality, ability, and spirituality, to name a few, that all manage to communicate the same poisonous lie:

How To Exercise Out Of Self-Love and Not Due To Fat-Shaming. Full disclosure: I am kind of a curvy lady. 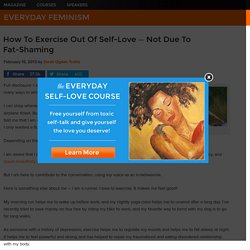 I say kind of because there are many ways in which I can pass as thin. 3 Tools To Handle Conflict and Stress In A Healthy Way. We’ve all been there. 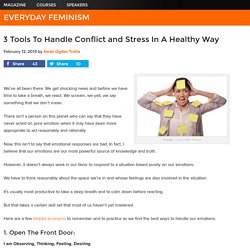 We get shocking news and before we have time to take a breath, we react. We scream, we yell, we say something that we don’t mean. Ten Rules For Fat Girls. I'm A Victim-Blamer (But Only When The Victim Was Me)! Does anyone remember LiveJournal? 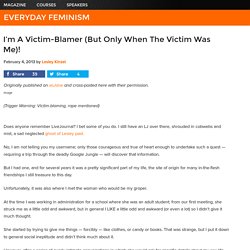 I bet some of you do. I still have an LJ over there, shrouded in cobwebs and mist, a sad neglected ghost of Lesley past. 5 Ways To Switch From Sabotaging Thoughts To Empowering Ones. It’s easy for me to let negative thoughts creep into my mind and follow them down dark pathways, into large Grimm brother-like forests, where I not only feel misguided but also frightened. It’s easy for me to believe my stories of not being good enough, thin enough, smart enough, successful enough, because these were the stories I grew up telling myself. But when I realized that the magical element of a story is that it can change and be anything, well, that’s when I knew I wanted to edit mine.

I wanted to shed false or limiting beliefs. I wanted to stop talking down to myself and comparing myself to others. I wanted to stop following the path that lead me into the black forest and find one that lead me into a space of joy, creativity, inspiration, motivation, and adventure. Sure, sounds great, right? Well, not exactly, but close. Although groundbreaking results didn’t come overnight, what did start to happen were small shifts. How Yoga Saves Me From My Anxiety. 7 Ways to Love Your Body (Through Thick And Thin) Why You Should Stop Comparing Yourself To Others (And How To Do It) Back somewhere in the mid-2000′s, I was a bridesmaid in a friend’s wedding.

The dress that we collectively chose was rather nice– it was midnight blue and sleeveless and came with a rather lovely wrap. (This was long before I had embraced the beauty of sleevelessness, but I digress.) The bride had hired a makeup artist and hair stylist to work on all of the bridesmaids, and so with a combo of a really pretty dress and wonderful hair and makeup, I was feeling pretty good about myself. That is, until, I saw all the other bridesmaids (who were all much thinner than me), and I found myself pulled into the deep vortex of comparing myself to them.

I'm Not Sexy and I'm Totally Ok with That. 3 Steps Toward Changing Your Relationship with Something You Don't Like About Yourself. I went through a period — okay, it was more like a decade — where I didn’t like much of anything about myself. No matter how many times the external world told me that I was smart, beautiful, and awesome, I believed what I believed – and that was that “no, I was not.”

Instead, I would sit for hours wondering what was wrong with me, why I wasn’t like so-and-so, or why I couldn’t just like myself. During my Decade of Down, I couldn’t figure out how to stand up and walk into another frame. I was stuck. But, then, something happened. What Does Being Emotionally Healthy Look Like? How To Get Over Other People's Opinions of You. How to Be Upset (In a Good Way) 8 Secrets from 8 Curvy Women Who Love Their Bodies. The number one question that I get asked as a body image expert and 250-pound woman who loves her body is: How did you do it?

Often there’s some presumption that a magic potion or being born on a secret unicorn-infested (infested?) Island is part of the story. Lose Hate, Not Weight. I lived a very long time with the belief that my body was my enemy. I believed it had betrayed me, swallowed me up, and that I – the real me – was deep down somewhere inside. The “real me” was pretty and petite and frail, with legs like twigs and only one chin.

OMG, Un-Tag Me!: Photo Sharing and Body Image in the Facebook Generation. We read an article in Glamour recently on how to look better in photos, and would like to share some of the key points with you, in case you, too, would like to be Glamorous. “Wear makeup,” the magazine says. A lot of makeup. Creating Change through Acceptance. You Have My Permission To Love And Accept Your Body, Just As It Is, Right This Minute. Originally published on Body Love Wellness and cross-posted here with their permission. 3 Steps To Healing A Strained Mother-Daughter Relationship.

Let's Show Our Bodies Some Love! Feel Better About Yourself: Cut These Five Words. What's My Purpose? Hate Your Body? Take More Pics! I Really Want to Be Well: Healing Trauma is Central to My Feminist Practice. A breakthrough is nothing more than an awakened breakdown. I have had plenty of breakdowns that I have survived, but I haven’t always been fully aware of what was happening in the moment. Nurturing the Breakthroughs: From Aha! to Action in Our Need to Heal.

Being in a Romantic Relationship When You Don't Feel Like You're Lovable. You’ve probably heard that old adage more than once, “You can’t love someone until you love yourself!” Or, as RuPaul says, “If you don’t love yourself, how in the hell are you going to love somebody else?” Well, if you’re reading this post, you may be proving the adage wrong.

In fact, in some ways, when you don’t feel lovable it can actually feel much easier to love somebody else than yourself. Feel Better! The Hardest Part of Grieving: Actually Allowing Yourself to Do It. Working through Feelings of Inadequacy. Journeys in Self Acceptance. How to Say What You Feel. The Fix-a-Feeling Dilemma: How to Be There for Someone During an Emotionally Difficult Time. Word in the spiritual sphere is that there are no experiences that come to us unless and until we summon them our way. Overly Sensitive, Highly Emotional, and Other Feminine Flaws. That’s my (admittedly random) approximation of the number of times I’ve been called highly emotional or otherwise plastered with the overly sensitive label. Though I disagree with the qualifiers, I’m in unabashed agreement with the adjectives.

Small Acts of Self-Care as an Intentional Practice. 3 Things to Remember When You Can't Stop Being Hard on Yourself. 5 Ways to Boost Confidence. Seeing Other Women As Allies, Rather Than Enemies: A How-To. I’ve definitely been the type to see a beautiful woman walk into a room and feel less-than, have a friend receive a better grade and feel stupid, or, honestly, see any woman doing anything spectacular at all and feel not only jealous, but also the nagging feeling that I could never accomplish the same things. Radical Self Expression. To Keep Ourselves from Drowning in Emotion. 5 Reasons Fitspo Is Bad for Your Health. 5 Everyday Supportive Phrases That Actually Aren't Very Supportive. The Healing Power of Community. 5 Steps Toward Effectively Communicating Your Feelings. Communication is hard. Let me rephrase that: Effective communication is hard. Letting Go of Baggage. How to Trust What Lies Within. Selfies and Misogyny: The Importance of Selfies as Self-Love.

4 Ways to Know Yourself and Find What You Need. Don't Call Me Beautiful (And What to Say Instead) 5 Ways to Stop Anger from Poisoning Your Inner Space. 5 Positive Words and Phrases to Incorporate into Your Day. The Body Is Not An Apology. 4 Simple Ways to Cast Out Impostors Syndrome. How Body Love Can Change Society for the Better. Why We Compare Ourselves to Others on Social Media (And 3 Ways to Stop) Source: Cambridge Medicine This post was republished with permission from tinybuddha.com. You can find the original post here. “The reason we struggle with insecurity is because we compare our behind-the-scenes with everyone else’s highlight reel.” —Steve Furtick.