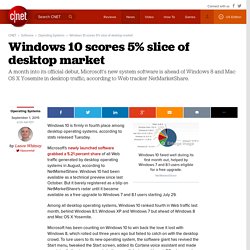 Microsoft's newly launched software grabbed a 5.21 percent share of all Web traffic generated by desktop operating systems in August, according to NetMarketShare. Windows 10 had been available as a technical preview since last October. But it barely registered as a blip on NetMarketShare's radar until it became available as a free upgrade to Windows 7 and 8.1 users starting July 29. Among all desktop operating systems, Windows 10 ranked fourth in Web traffic last month, behind Windows 8.1, Windows XP and Windows 7 but ahead of Windows 8 and Mac OS X Yosemite.

Microsoft has been counting on Windows 10 to win back the love it lost with Windows 8, which rolled out three years ago but failed to catch on with the desktop crowd. So far, Windows 10 adoption is far outpacing that of Windows 8 over a similar time frame. Instagram Direct now supports private photo sharing, selfies and emojis. Instagram has finally made some feature updates to Instagram Direct that finally makes it a true messaging service, and also eliminating annoying habits many on Instagram have right now. 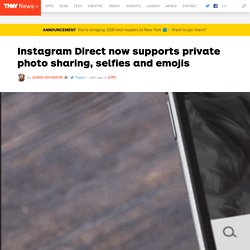 Announced in a blog post today, version 7.5 is currently available for both iOS and Android. The primary improvement to the feature is that you can finally send content from your feed as a Direct Message. Previously, Instagram Direct was limited to original photographs to share with others. Now, users can share photos directly with one another, and clicking that photo will bring the user back to the source.

Introducing this photo share eliminates the common practice of tagging friends within the comments of photos — which can often clutter up a user’s feed on especially popular photos. Additionally, users can now quick reply with selfies directly to the group. Structurally, Direct has undergone a makeover as well. Disney Worldwide Services - Job details. Blended Learning.

QR Code Resources. Digital Differentiation. Technology is a tool that can be used to help teachers facilitate learning experiences that address the diverse learning needs of all students and help them develop 21st Century Skills. 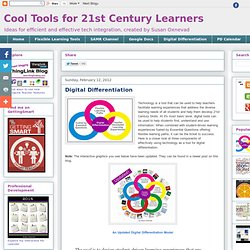 At it's most basic level, digital tools can be used to help students find, understand and use information. When combined with student-driven learning experiences fueled by Essential Questions offering flexible learning paths, it can be the ticket to success. Here is a closer look at three components of effectively using technology as a tool for digital differentiation. Note: The interactive graphics you see below have been updated. President's Day Resources.

February 2012. Planning for Responsible Tech Integration. In February of 2012, full-time classroom teacher and technology author Bill Ferriter will be presenting to the Technology Committee of the Wake County Division of Principals on both the changing nature of teaching and learning in the 21st Century and the steps that school leaders can take to craft careful technology integration plans for their schools. 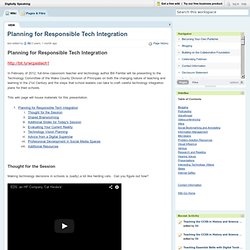 This wiki page will house materials for this presentation. Thought for the Session Making technology decisions in schools is (sadly) a lot like herding cats. Can you figure out how? Shared Brainstorming Several years ago, the Wake Education Partnership released a report that asked a critical question: What DOES a world class public education that prepares students for the global economy look like in action? Let’s Stop Encouraging Teachers to “Teach Technology” Money Island: a financial literacy virtual world. What it is: Money Island is a neat site I found today while searching for some fun tie ins for our economic inquiry block at Anastasis. 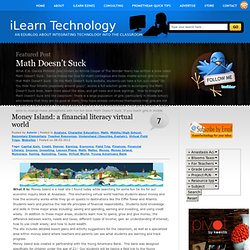 This enchanting virtual world teaches students about money and how the economy works while they go on quests to destinations like the Eiffel Tower and Atlantis. Students learn and practice the real-life principles of financial responsibility. Students build knowledge and skills in three major areas including: saving and spending, earning and investing, and using credit wisely. In addition to these major areas, students learn how to spend, grow and give money; the difference between wants, needs and taxes; different types of income; gain an understanding of interest; how to use credit wisely; and how to build wealth. Have you looked at Thinkfinity lately? 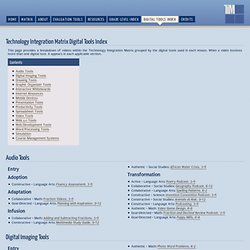 When a video involves more than one digital tool, it appears in each applicable section. Audio Tools Entry Adoption Constructive - Language Arts: Fluency Assessment, 3-5 Adaptation Collaborative - Math: Fraction Videos, 3-5 Goal-Directed - Language Arts: Planning with Inspiration, 9-12. Hyperlinked Writing in the Classroom- From Theory to Practice  This is the follow up post to the theoretical Wondering About Hyperlinked Writing. 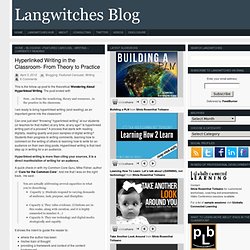 The post ended with Now…on from the wondering, theory and resources…to the practice in the classroom. Middle School Students Love Little Bird Tales Too - Guest Post. Training Teachers to Integrate Technology. Stacey Davis, Ron Beazer and Mike Smith used to do a lot of "drive-by training. 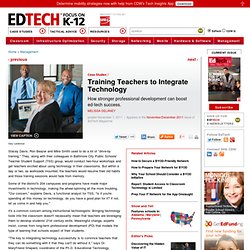 " They, along with their colleagues in Baltimore City Public Schools' Teacher Student Support (TSS) group, would conduct two-hour workshops and get teachers excited about using technology in their classrooms. But within a day or two, as workloads mounted, the teachers would resume their old habits and those training sessions would fade from memory. Some of the district's 204 campuses and programs have made major investments in technology, making the wheel-spinning all the more troubling.