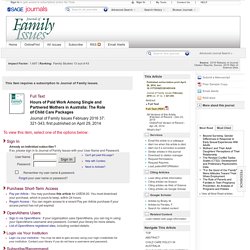 Sign In. Impact Factor:1.418 | Ranking:Social Issues 13 out of 41 | Social Sciences, Interdisciplinary 19 out of 93 | Sociology 36 out of 142 Source:2016 Release of Journal Citation Reports, Source: 2015 Web of Science Data This item requires a subscription to Youth & Society. 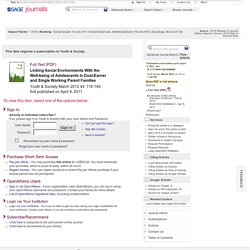 To view this item, select one of the options below: What role can child and family services play in enhancing opportunities for parents and families : Exploring the concepts of social exclusion and social inclusion. This Practice Sheet draws upon research to provide practitioners and policy-makers with ideas about how the concept of social inclusion can be used to plan and deliver child and family services in ways that enhance opportunities for parents and families. 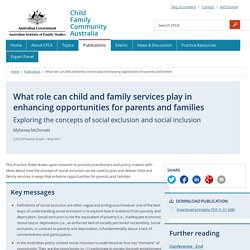 What is social exclusion? According to a report by Catholic Social Services (2010) "social exclusion has never been an easy term to define" (p. 10). Employment. Family Matters - Issue 91 - Post-separation parenting and Indigenous families. Family Matters - Issue 84 - Children's exposure to parental and familial adversities. The experience of trauma, loss and bereavement during childhood have both immediate and long-term consequences for health and general wellbeing. 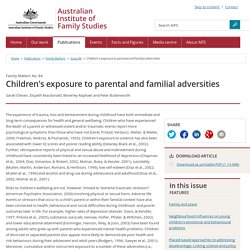 Children who have experienced the death of a parent or witnessed violent and/or traumatic events report more psychological symptoms than those who have not (Cerel, Fristad, Verducci, Weller, & Weller, 2006; Freeman, Mokros, & Poznanski, 1993). Children's exposure to violence has also been associated with lower IQ scores and poorer reading ability (Delaney-Black et al., 2002). Issues for the safety and wellbeing of children in families with multiple and complex problems - How do drug and alcohol misuse, mental health problems and domestic violence affect parenting? Substance misuse, mental health problems and domestic violence are commonly associated with child protection involvement and are described as "key risk factors" for child abuse and neglect. 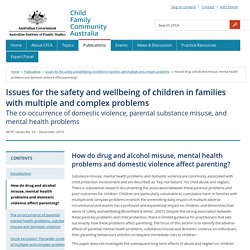 There is substantial research documenting the association between these parental problems and poor outcomes for children. Children are particularly vulnerable to cumulative harm in families with multiple and complex problems in which the unremitting daily impact of multiple adverse circumstance and events has a profound and exponential impact on children, and diminishes their sense of safety and wellbeing (Bromfield & Miller, 2007). Despite the strong association between these parental problems and child protection, there is limited guidance for practitioners that sets out exactly how these problems affect parenting. This paper does not investigate the subsequent long-term effects of abuse and neglect on children. How can parental substance misuse affect parenting Individual impacts Risks to children.

Family Matters - Issue 85 - Family is for life. This article highlights the formative influence of familial childhood experiences on the lives of young adults. 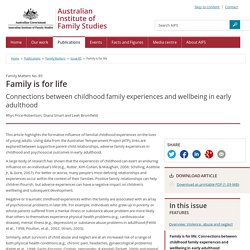 Using data from the Australian Temperament Project (ATP), links are explored between supportive parent-child relationships, adverse family experiences in childhood and psychosocial outcomes in early adulthood. A large body of research has shown that the experiences of childhood can exert an enduring influence on an individual's life (e.g., Rutter, Kim-Cohen, & Maughan, 2006; Schilling, Aseltine Jr, & Gore, 2007).

For better or worse, many people's most defining relationships and experiences occur within the context of their families. Positive family relationships can help children flourish, but adverse experiences can have a negative impact on children's wellbeing and subsequent development. Negative or traumatic childhood experiences within the family are associated with an array of psychosocial problems in later life. Two questions were addressed: The study Measures Findings. Family Matters - Issue 90 - The prevalence of potential family life difficulties in a national longitudinal general population sample of Australian children. 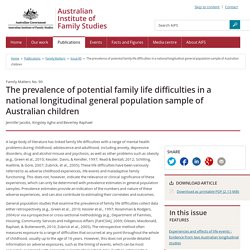 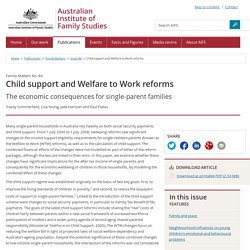 From 1 July 2006 to 1 July 2008, sweeping reforms saw significant changes to the income support eligibility requirements for single-resident parents (known as the Welfare to Work [WTW] reforms), as well as to the calculation of child support. The combined financial effects of the changes were not modelled as part of either of the reform packages, although the two are linked in their aims. In this paper, we examine whether these changes have significant implications for the after-tax income of single parents, and consequently for the economic wellbeing of children in those households, by modelling the combined effect of these changes. The concerns that led to the introduction of the child support scheme have not abated.

It is outside the scope of this paper to determine if the combined reforms fulfil their intended goals; rather we consider their potential in this regard. Endnotes. Nov 2013. PERCENTAGE OF PEOPLE(a) REPORTING NO RELIGION(b), 1911-2011 (a) Prior to 1971, people describing themselves as as more than 50% Aboriginal were excluded from counts of the population(b) Includes (variously over time) atheists, agnostics, freethinkers, socialists, rationalists, humanists and people who stated 'No denomination' and 'No religion'(c) In the 1933 Census the public was specifically informed there was no legal obligation to answer the question on religion. 'Not stated' responses increased at this point. 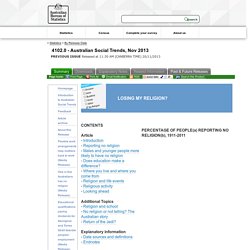 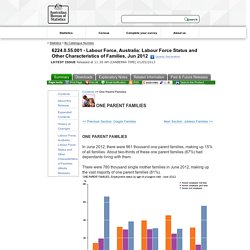 Families with no employed parent may be at risk of economic disadvantage and reduced social opportunities, and these in turn may impact on the wellbeing of the family members. Children are amongst the most vulnerable of the family members and may be at greater risk of experiencing financial hardship and income poverty. Furthermore, a child's future development, social position and relative economic success may depend on their access to economic resources during the first 15 years of life. The Social Inclusion Board recently reported that Australia has one of the highest levels of joblessness amongst families of all developed countries in the OECD. Jun 2012. <h4>Please enable javascript to see the dynamic graph content</h4> This article features in Episode 5 of the Australian Social Trends Podcast series.Listen to the episode, or subscribe to the series, here , or via RELATIVE PARTICIPATION(a) IN ORGANISED SPORT OR DANCING BY AGE GROUP - 2009 (b) Related terms statistics on children, kids sport, kids in sport, sport for kids, physical health, physical activity, health for children, fitness, parents, too much tv Participation in physical activity, through various activities such as organised sport or dancing, is important for the development of motor coordination skills, social skills and physical fitness.

While most children may have access to a wide range of sporting activities, certain circumstances or characteristics of a child may be associated with lower or higher participation in organised sport or dancing. Differences by age Differences by sex. What is poverty and inequality in developed and developing count.