Simple and Affordable: Possibly One of the Best DIY Motorized Camera Sliders. The YouTube channel Rideable Entertainment may just have created the most impressive DIY camera slider I have ever seen. 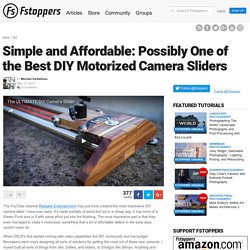 It's made partially of wood but not in a cheap way. It has more of a Steam Punk look to it with some effort put into the finishing. The most impressive part is that they even managed to make it motorized, something that a lot of affordable sliders in the early days couldn't even do. When DSLR's first started coming with video capabilities the DIY community and low budget filmmakers went crazy designing all sorts of solutions for getting the most out of these new cameras. I myself built all sorts of things from Jibs, Dollies, and sliders, to Shotgun Mic Blimps.

However if you still want to give building your own slider a try, or you just don't have the cash to buy one of the cheaper third party knock offs, then this DIY build is the one I would recommend. Lindsay Adler's Secret $10 DIY Lighting Tool For Photographers. Lindsay Adler has photographed for some of the worlds biggest fashion magazines, including InStyle, Elle, and Marie Claire, but that doesn’t mean she doesn’t DIY her tools to get her shots to look exactly the way she needs them to. 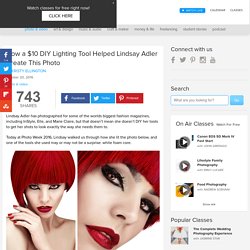 Today at Photo Week 2016, Lindsay walked us through how she lit the photo below, and one of the tools she used may or may not be a surprise: white foam core. Along with an overhead beauty dish and a few other tools (that are a cost investment, no doubt), Lindsay used two white foam core boards in a v-shape under the model’s chin to add some nice uplight to her face. There are more expensive ways you can light a scene, but spending $10 and a trip to Michael’s proves that you don’t have to drop a small fortune on lighting setups. You can find more of Lindsay’s favorite lighting setups on her site! How I Faked Natural Window Light for a Photo Shoot. 5 DIY Tutorials and Gear Hacks for Filmmakers. Top image via Deakins Online We are big supporters of DIY filmmakers and hacked-together video equipment. 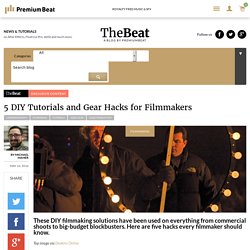 It’s problem solving at its finest. Apparently we like to write about a lot — especially if there are five things to teach you. See any of the following; I almost feel like I let readers down by writing 3 Creative Ways to Use a Ladder on Set. 1. Image: Behind the Scenes of Prisoners via Warner Bros. Inside the Home Studio with Tony Corbell. Wirelessly Control Your DSLR for Less Than $40. Hypex Electronics BV - Home. How to Build Your Own Set of LED Studio Lights for Just $250. Control Your Camera Rig with the Blackmagic SDI Arduino Shield. How to Create Your Own In-Home Photo Studio.

Editor’s Note: This post appears in The Lumoid blog, and is reposted here with their permission. 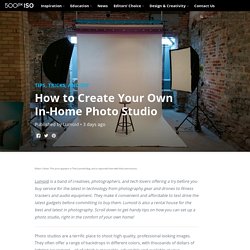 Lumoid is a band of creatives, photographers, and tech lovers offering a try before you buy service for the latest in technology from photography gear and drones to fitness trackers and audio equipment. They make it convenient and affordable to test drive the latest gadgets before committing to buy them. Lumoid is also a rental house for the best and latest in photography. Scroll down to get handy tips on how you can set up a photo studio, right in the comfort of your own home! Photo studios are a terrific place to shoot high quality, professional looking images. When setting up your studio, the first thing you’ll need is some open wall space – I recommend at least five feet across and all the way up to the ceiling. The second item, or items, you’ll need is a backdrop. The third item, and in my opinion, the most important item you’ll need, is a light source. How to Make Flexible LED Panels (DIY Flex Lights!)

The Simplest and Most Effective One Light Setup I've Ever Used. In this post I’ll be sharing the best one light portrait setup I’ve ever used. 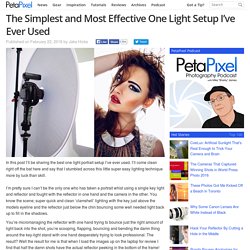 I’ll come clean right off the bat here and say that I stumbled across this little super easy lighting technique more by luck than skill. I’m pretty sure I can’t be the only one who has taken a portrait whist using a single key light and reflector and fought with the reflector in one hand and the camera in the other. You know the scene; super quick and clean ‘clamshell’ lighting with the key just above the models eyeline and the reflector just below the chin bouncing some well needed light back up to fill in the shadows. You’re micromanaging the reflector with one hand trying to bounce just the right amount of light back into the shot, you’re scooping, flapping, bouncing and bending the damn thing around the key-light stand with one hand desperately trying to look professional.

The result? Step One: Pick a Reflector. Shoot Macro Photos — with a Pringles Can. By Joseph Linaschke | Thursday, July 24, 2014 Macro photography requires a big investment in lots of expensive gear, right? 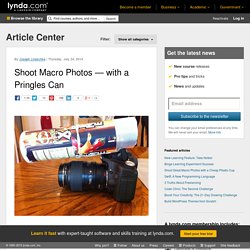 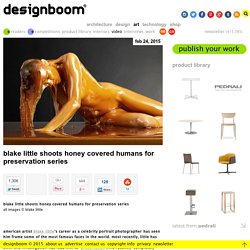 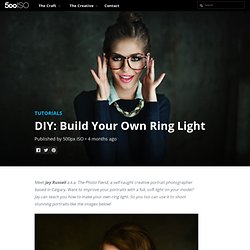 The Photo Fiend, a self-taught creative portrait photographer based in Calgary. Want to improve your portraits with a full, soft light on your model?