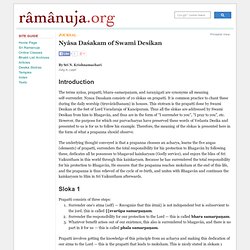 Krishnamachari July 8, 1998 The terms nyâsa, prapatti, bhara-samarpaṇam, and śaraṇâgati are synonyms all meaning self-surrender. The underlying thought conveyed is that a prapanna chooses an acharya, learns the five angas (elements) of prapatti, surrenders the total responsibility for his protection to Bhagavân by following these, dedicates all he possesses to bhagavad kainkaryam (Godly service), and enjoys the bliss of Sri Vaikuntham in this world through this kainkaryam.

Prapatti consists of three steps: Surrender one’s atma (self) — Recognize that this âtmâ} is not independent but is subservient to the ḷord. ṭhis is called {{svarūpa samarpaṇam. Raja Yoga - By Swami Vivekananda. By Swami Vivekananda The following is a summary of Raja-Yoga freely translated from the Kurma-Purana. 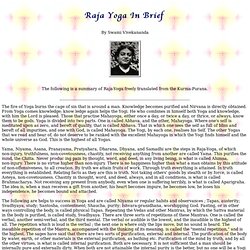 The fire of Yoga burns the cage of sin that is around a man. Knowledge becomes purified and Nirvana is directly obtained. From Yoga comes knowledge; know ledge again helps the Yogi. He who combines in himself both Yoga and knowledge, with him the Lord is pleased. Kaula. Kaula or Kula describes a type of Hindu tantrism reckoned by Gavin Flood[1] to derive from Kapalika or "cremation ground" asceticism, and to divide into northern, eastern, southern and western schools across the subcontinent. 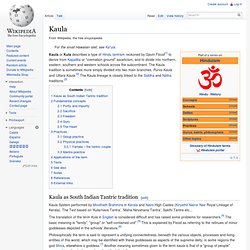 The Kaula tradition is sometimes more simply divided into two main branches, Purva Kaula and Uttara Kaula.[2] The Kaula lineage is closely linked to the Siddha and Nātha traditions.[3] Kaula as South Indian Tantric tradition[edit] Kaula System performed by Moothath Brahmins in Kerala and Nairs High Castes (Kiryathil Nairor Nair Royal Lineage of Kerala). The Text based on 'Kularnava Tantra', 'Maha Nirvahana Tantra', Sakthi Tantra etc.,. The translation of the term Kula in English is considered difficult and has raised some problems for researchers.[4] The basic meaning is "family", "group" or "self-contained unit".[5] This is explained by Flood as referring to the retinues of minor goddesses depicted in the schools' literature.[6] Fundamental concepts[edit] 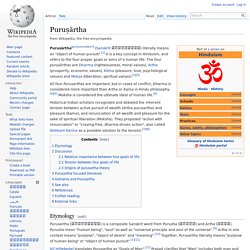 (Sanskrit पुरुषार्थ) literally means an "object of human pursuit".[1] It is a key concept in Hinduism, and refers to the four proper goals or aims of a human life. The four puruṣārthas are Dharma (righteousness, moral values), Artha (prosperity, economic values), Kāma (pleasure, love, psychological values) and Mokṣa (liberation, spiritual values).[2][3] All four Purusarthas are important, but in cases of conflict, Dharma is considered more important than Artha or Kama in Hindu philosophy.[4][5] Moksha is considered the ultimate ideal of human life.[6] Historical Indian scholars recognized and debated the inherent tension between active pursuit of wealth (Artha purusartha) and pleasure (Kama), and renunciation of all wealth and pleasure for the sake of spiritual liberation (Moksha).

They proposed "action with renunciation" or "craving-free, dharma-driven action", also called Nishkam Karma as a possible solution to the tension.[7][8] Etymology[edit] On Dharma. Guṇa. Guṇa (Sanskrit: गुण) means 'string' or 'a single thread or strand of a cord or twine'. 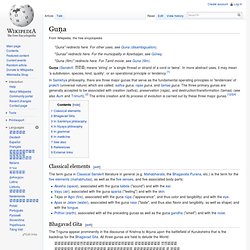 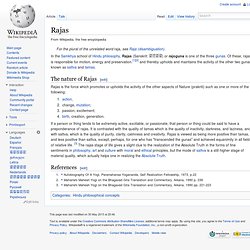 Tamas (philosophy) In the Samkhya school of philosophy, tamas (Sanskrit: तमस् tamas "darkness") is one of the three gunas (or qualities), the other two being rajas (passion and activity) and sattva (purity, goodness). 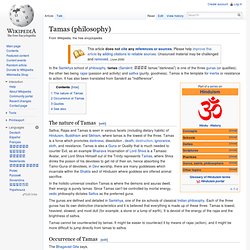 Tamas is the template for inertia or resistance to action. It has also been translated from Sanskrit as "indifference". In the holistic-universal creation Tamas is where the demons and asuras dwell, their energy is purely tamas. Since Tamas can't be controlled by mortal energy, vedic philosophy dictates Sattva as the preferred guna. Kosha. According to the Kosha system in Yogic philosophy, the nature of being human encompasses physical and psychological aspects that function as one holistic system. 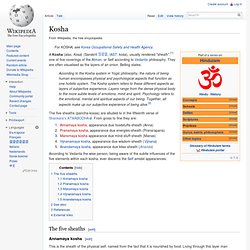 The Kosha system refers to these different aspects as layers of subjective experience. Layers range from the dense physical body to the more subtle levels of emotions, mind and spirit. Psychology refers to the emotional, mental and spiritual aspects of our being. Together, all aspects make up our subjective experience of being alive.[2] Antahkarana. Yoga Sutras (01/85) Swami Rama.