Rising Ascendant Calculator. The Mounts of Mars - Palmistry. While Venus represents the forces of love and peace, the mounts of Mars represent the energies of aggression and courage. 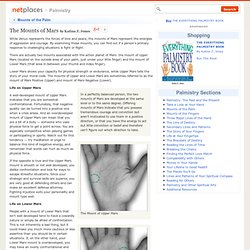 By examining these mounts, you can find out if a person's primary response to challenging situations is fight or flight. There are actually two mounts associated with the action planet of Mars: the mount of Upper Mars (located on the outside area of your palm, just under your little finger) and the mount of Lower Mars (that area in-between your thumb and index finger).

Lower Mars shows your capacity for physical strength or endurance, while Upper Mars tells the story of your moral code. JIM AND THE FATE LINE. PALMISTRY - THE MERCURY LINE - JIM WINTER. Mount of Mars, Mars Mount. Upper Mount of Mars Position - Immediately under the mount of mercury,along the percussion.In a normal hand it occupies the space between the Head line and the Heart line When normal position it in dictates courage and obstinacy. 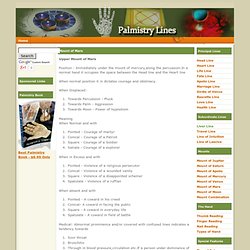 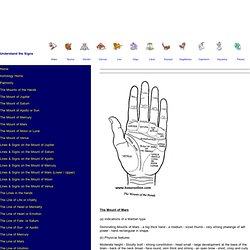 Triangles, Palmistry. Triangles found on the palm of an individual are considered as imperative signs in the science of Palmistry and is analysed with sufficient importance. 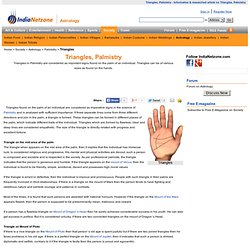 If three separate lines come from three different directions and join in the palm, a triangle is formed. These triangles can be formed in different places of the palm, which indicate different traits of the individual. Triangles which are formed by flawless, clear and deep lines are considered empathetic. Mount of Moon, Moon Mount. Mount of Moon Position of the Mount of Moon Immediately under the upper mount of mars, along the percussion. 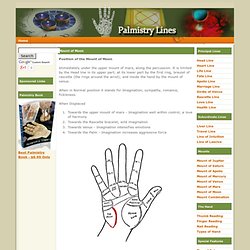 It is limited by the Head line in its upper part; at its lower part by the first ring, braulet of rascette (the rings around the wrist); and inside the hand by the mount of venus. When in Normal position it stands for Imagination, sympathy, romance, fickleness. When Displaced Towards the upper mount of mars - Imagination well within control, a love of harmony Towards the Rascette bracelet, wild imagination Towards Venus - Imagination intensifies emotions Towards the Palm - Imagination increases aggressive force Meaning: When Normal and with Pointed fingers - Imagination at his best Conical fingers gifted artist Square - Healthy love of poetry Spatulate -Violent insanity When Absent and with Pointed one hardly ever or never comes across this combination Conical - Acting ability but more imitation Square - Routine existence Spatulate - Pessimistic attitude.

Read your palm ! - only 7 minutes lectured by Japanese Ninja. Palm Reading: Indicators of Love in Palmistry. The Shape of the Hand There are four general shapes of the hand, and these are related to the four elements of Air, Earth, Fire, and Water: When considering the length of the palm: When the vertical and horizontal measurements of the palm are approximately equal, it is considered a square palm. 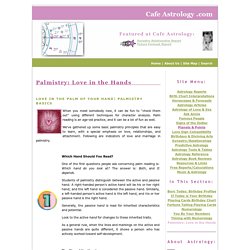 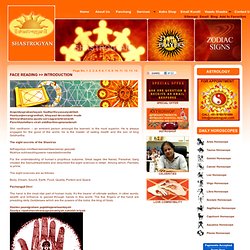 He is always engaged for the good of the world, he is the master of lasting health and the son of king Siddhartha. The eight secrets of the Shastras Adhagvidya nimittaanaamashtaanaampi geeyate Mukhya subhasubhgyaane naaradadinivedita For the understanding of human’s propitious outcome, Great sages like Narad, Parashar, Garg created the Samudrikashastra and described the eight sciences in detail. Among which, Pamistry is prime. The eight sciences are as follows: