Bagalamukhi. Kali Maa. Tara. Dhumavati. Tripura Sundari. Shree Siddheshwari Sadhana. Back to Sadhna List Back to Issue The Sadhana that is the basis of Sadhanas of the ten Mahavidyas. 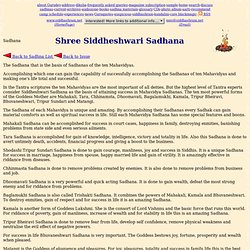 Accomplishing which one can gain the capability of successfully accomplishing the Sadhanas of ten Mahavidyas and making one’s life total and successful. In the Tantra scriptures the ten Mahavidyas are the most important of all deities. But the highest level of Tantra experts consider Siddheshwari Sadhana as the basis of attaining success in Mahavidya Sadhanas. The Sadhana of each Mahavidya is unique and amazing. Mahakali Sadhana can be accomplished for success in court cases, happiness in family, destroying enmities, banishing problems from state side and even serious ailments. Tara Sadhana is accomplished for gain of knowledge, intelligence, victory and totality in life. Shodashi Tripur Sundari Sadhana is done to gain courage, manliness, joy and success in Siddhis. 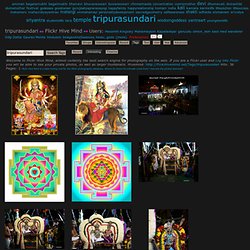 All thumbnail images come directly from Flickr, none are stored on Flickr Hive Mind. These photos are bound by the copyright and license of their owners, the thumbnail links take to you to the photos (as well as their copyright and license details) within Flickr. Because some other search engines (Google, etc.) index parts of Flickr Hive Mind, you may have been led here from one of them. Welcome to Flickr Hive Mind, almost certainly the best search engine for photography on the web. If you are a Flickr user and use Flickr Stats you may have seen people being led to your photos via Flickr Hive Mind (as a Referrer). Flickr Hive Mind is a data mining tool for the Flickr photography database, allowing search by: tags(keywords); Flickr photography groups; Flickr users, their contacts, and favorites; free text; the Flickr Explore algorithm for interestingness. Most interesting photos tagged with mahavidya. Dasa Mahavidya Yantras. DUS MAHA VIDYA. KALI Goddess Kali holds the primary position among all the ten great learnings. 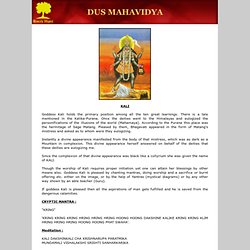 There is a tale mentioned in the Kalika-Purana. Dus Mahavidyas - the Ten Forms of the Devi. Hinduism is probably the only religion in the world which talks about Shakti (the Sacred Feminine) concept as being equal in power to the Parabrahma or the Supreme Divine. 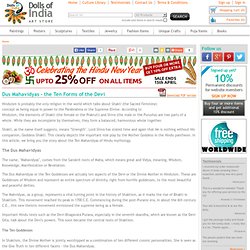 According to Hinduism, the elements of Shakti (the female or the Prakruti) and Shiva (the male or the Purusha) are two parts of a whole. While they are incomplete by themselves, they form a balanced, harmonious whole together. Shakti, as the name itself suggests, means "Strength". Lord Shiva has stated time and again that He is nothing without His companion, Goddess Shakti. Dus Mahavidyas - Vashikaran Specialist. The ten great learnings are related with Sati, Shiva and Parvati, all synonymous of the same Shakti (power). 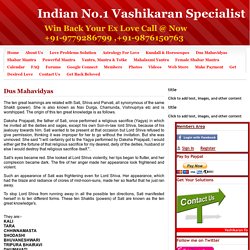 She is also known as Nav Durga, Chamunda, Vishnupriya etc and is worshipped. The origin of this ten great knowledge is as follows. Daksha Prajapati, the father of Sati, once performed a religious sacrifice (Yagya) in which he invited all the deities and sages, except his own Son-in-law lord Shiva, because of his jealousy towards him.

Sati wanted to be present at that occasion but Lord Shiva refused to give permission, thinking it was improper for her to go without the invitation. But she was unmoved: She said "I will certainly got to the Yagya performed by Daksha Prajapati, I would either get the fortune of that religious sacrifice for my dearest, deity of the deities, husband or else I would destroy that religious sacrifice itself. ". Sati's eyes became red. Such an appearance of Sati was frightening even for Lord Shiva. October 2010. Kalabhairava is the fierce manifestation of lord Shiva. 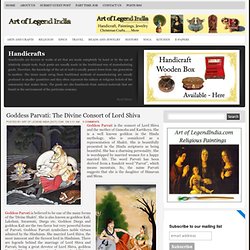 The Sanskrit meaning of the word ‘Bhairava’ is ‘terrible’ or ‘frightful’. He is depicted ornamented with a range of twisted serpents, which serve as earrings, bracelets, anklets and sacred thread. He wears a tiger skin and a ritual apron composed of human bones. Bhairava has a dog as his vehicle. He is worshipped as an incarnation of Lord Shiva by some Shaivaites. Kalabhairava is usually depicted in a fierce form decorated with serpents and carrying a head, which according to the Puranas, was the fourth head of Lord Brahma which lord Shiva in his aspect as Kalabhairava cut off to teach him a lesson.