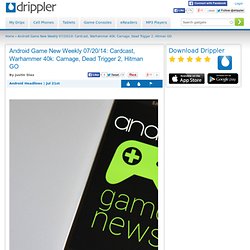 Dehumanize Your Friends(formerly known as Casts Against Civility before they were asked to change the name)was actually the first of this type to hit the Play Store for Chromecast use. Cardcast actually looks to have a fairly nice user interface, a little more eye pleasing than all the purple in Dehumanize your friends, and it seems that memorable cards and familiar play are at work here, so if you’ve ever played the original Cards Against Humanity you should have no trouble at all understanding this game. With Cardcast, just open up the app and let every player connect up to the Chromecast, and then you can pick your decks and you’re ready to play. The game supports up to 10 players with a minimum of 2, and it’s also free. Click here to view the embedded video.

Heartbreak Android Review. We have been pretty lucky recently here at The Smartphone App Review. 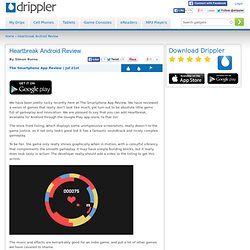 We have reviewed a series of games that really don’t look like much, yet turn out to be absolute little gems full of gameplay and innovation. We are pleased to say that you can add Heartbreak, available for Android through the Google Play app store, to that list. The store front listing, which displays some unimpressive screenshots, really doesn’t to the game justice, as it not only looks great but it has a fantastic soundtrack and nicely complex gameplay. To be fair, the game only really shines graphically when in motion, with a colourful vibrancy that complements the smooth gameplay. It may have simple building blocks, but it really does look tasty in action. LeanDroid. This is just a donation package which activatessome experimental features (require ROOT) in the Greenify (free) app. 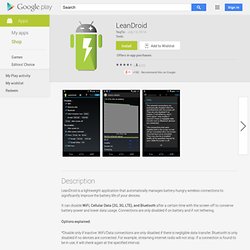 Enable features from the main menu of Greenify. === 7 Days Refund Guarantee === Don't worry about the 15 minutes window, just relax and explore all the features. Refund requested in orders of Google Play within 7 days is guaranteed. (may take days to manually process). Mr. Silent, Auto silent mode. Now no more goofing up on typing when you are walking! 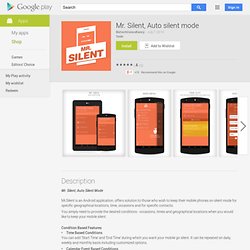 How? You can now easily type messages, read and send images and messages while walking to your destination without messing up with traffic on road or street! We have come up with a unique and innovative concept of offering an application that has a high resolution camera to capture the ambience and happenings surrounding you while you are on your way and simultaneously wish to use your mobile too for typing! Hay Day - Android-Apps auf Google Play. Malwarebytes Anti-Malware. Only One. "Spectral Souls - Resurrection of the Ethereal Empires" (English Version), the first Full Size Tactical RPG for Android platform available for your favorite Smartphone : * The first full scale Japanese Tactical RPG for Android.* 52 outstanding soundtracks.* 84 characters.* High resolution graphic assets.* 100's of hours of GamePlay packed in 1GB data.* Cut-Scene videos.* Support for Touch & Keyboard with key mapping. 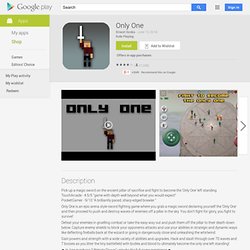 Simply "a must have" for all fan of "Spectral Souls universe" and for all fan of Tactical RPG in general. - You need a SDCARD with at least 1.5 GB of free space. - There is a MASSIVE 1GB additional data download to complete the installation so WIFI is "ABSOLUTELY NECESSARY" and a good dose of patience too, the installation may take from 30mn to 60mn to complete based on your Internet network configuration and/or our servers congestion, everybody will be served but please be patient. 10 Best Choose-Your-Own-Adventure Games (Like Out There) for Android. Playing Out There was just awful. 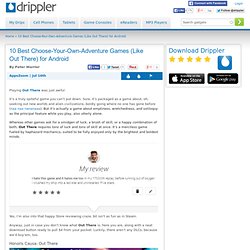 It’s a truly spiteful game you can’t put down. Sure, it’s packaged as a game about, oh, seeking out new worlds and alien civilizations, boldly going where no one has gone before (naa naa nananaaa). But it’s actually a game about emptiness, wretchedness, and soliloquy as the principal feature while you play, also utterly alone. Whereas other games ask for a smidgen of luck, a brush of skill, or a happy combination of both, Out There requires tons of luck and tons of skill at once. It’s a merciless game fueled by haphazard mechanics, suited to be fully enjoyed only by the brightest and boldest minds. Beauty Camera. Our own photo playground, ‘Cymera Season 2’. 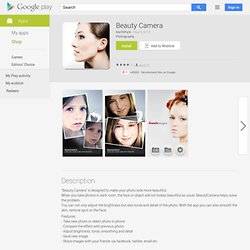 With 90 million users worldwide, Cymera has unveiled a whole new look! On top of the existing camera editing tools, we added ‘a secrete space’ for you and your friends to Photo Play in a unique way. Check out the all new Cymera Season 2! ■AlbumCreate and share photos through private albums with your friends. It will be a special hideout to have a good laugh by making cute or comical pics! Floatify - Smart Notifications. Out Now for Android – Transworld Endless Skater – Endless Skating Fun. It wasn’t too long ago that we heard about this title coming to Android. 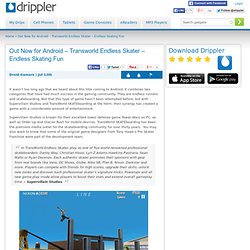 It combines two categories that have had much success in the gaming community. They are endless runners and skateboarding. Not that this type of game hasn’t been attempted before, but with Supervillain Studios and TransWorld SKATEboarding at the helm, their synergy has created a game with a considerable amount of entertainment.

Supervillain Studios is known for their excellent tower defense game Tower Wars on PC, as well as Order Up and Glacier Rush for mobile devices. TransWorld SKATEboarding has been the premiere media outlet for the skateboarding community for over thirty years. Best Photography Apps for Android. There are many high end Android phones out there by the likes of Samsung, LG and HTC, and they all offer very good cameras. 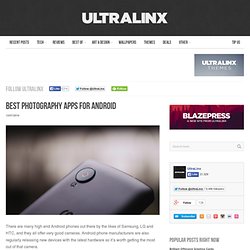 Android phone manufacturers are also regularly releasing new devices with the latest hardware so it’s worth getting the most out of that camera. There is an abundance of photography apps available for Android and they all offer many different features and options. We’re going to be listing the best all round photography apps for Android – that includes app functionality, design and usability. Key Ring Reward Cards & Coupon. GeoQpons is the only coupons and shopping app which combines in-store and online coupons, clearance sales, shopping list and loyalty cards for shopping at stores like Target, Macy’s, Best Buy, Walmart, Walgreens, Nordstrom, Meijer, CVS, Kohl’s, Bath and Body works, Gap, Old Navy, Office Depot, Toys R Us, and Starbucks. 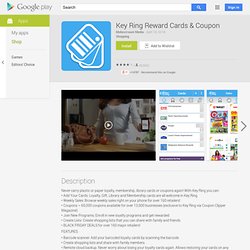 We update coupons daily for retailers such as Aeropostale, Athleta, American Eagle, Hot Topic, Banana Republic, Footlocker, Hobby Lobby, Macy’s, JCPenny, Express, Hollister, Forever21, Sears, Walmart, Kohl's, Home Depot, Lowes, Michael's, Victoria Secret Ulta, Camping World, Sephora and many more, Download GeoQpons coupons and holiday shopping app and join millions of other satisfied coupons users. GeoQpons’ Useful Features: Sonic Jump Fever. This lite version allows you to play the tutorial and half of the first tower as well as one multiplayer duel at a time. Get the full version for all the action! ★ ★ ★ ★ ★ “A charming twist on the Scrabble formula with more than enough content to keep you playing into the new year, Spellwood is well worth the investment.” 9/10 – Pocket Gamer Become a word wizard in Spellwood, the magical new word game.

Timberman. You're going for a ride - from the creators of FRUIT NINJA! One of the hottest mobile games in the world is now available free on Google Play! ** Winner ** - Pocket Gamer - Best Action/Arcade Game 2012- Pocket Gamer - Overall Game of the Year 2012 - Gamasutra Mobile Game of 2011 - Game Revolution Best Mobile Game 2011 Suit up with a selection of the coolest jetpacks ever made and take to the skies as Barry Steakfries, the lovable hero on a one-way trip to adventure! From the creators of the worldwide phenomenon Fruit Ninja comes the action-packed Jetpack Joyride, Halfbrick's most anticipated Android game ever! Leo's Fortune.

Leo’s Fortune est un jeu de plates-formes d'aventure primé dans lequel vous devez traquer le mystérieux voleur qui a dérobé votre or. Fleksy - Happy Typing. Sorry, Snapchat: This Clever Karaoke-Style Music App Is About to Be Your New Favorite Thing. Photo: Courtesy of Shelly S. Want to hear a secret? I know the lyrics to pretty much every popular song written in the last 20 years. But hardly anyone knows this about me because I can't sing.

Fluid SE. "A fast-paced and relentlessly hard racer, Fluid SE is well worth your time. 8 out of 10" - PocketGamer Fluid SE is a thrilling time-trial racer mixed with the arcade gameplay of Pac-Man, brought to you by Radiangames, creator of Inferno+, JoyJoy, Super Crossfire, and more. Speed through the mazes to collect the dots, find the optimal path, and avoid the swarms of spectres. Eliss Infinity. Simple in concept, deep in design, Hundreds is a puzzle game that requires quick fingers and deep thinking. “✭✭✭✭✭” ~ TouchArcade, Gamezebo, SlideToPlay, 148Apps, GameSaku, AppStorm and more The goal of Hundreds: Grow at least 100 points between the circles in each puzzle. Circles turn red and volatile while being grown and if they collide, it's game over. It's that easy. Blek. Blek is a unique game about imagination and personality.

"Perfect representation of touch-screen play" ~ The New York Times. Deadly Bullet. Radical.FM - Radio Re-Defined. This application is an advanced music and video player for Android 2.x devices. How to Test and Optimize Your Android’s Internet Speed. With evolving Wi-Fi, 3G and 4G speeds available across mobile networks worldwide, it is quintessential for you to pick the right connection to keep up with the rest of the world. Along with a strong internet connection, it is equally important to empower your smartphone or tablet with the right set of tools to perfectly optimize your device’s browsing, download and upload speeds.

Even with regular mobile browsers, a user must have the right tools in his device to help bring out maximum efficiency from your chosen internet connection. Whether you happen to work as an e-magazine editor or as a top company executive, the requirement of a decent internet connection is absolutely imperative to the success of your business endeavours. Here are 3 fantastic apps that will help you bring out the best of your smartphone or tablet’s internet performance. Speedtest.net Speedtest.net is an app that gives you an accurate measurement of the efficiency of your device’s internet speeds. Internet Booster. Access Apps Quickly Via Floating App in Android. Magisto Video Editor & Maker. 256. A quick and smooth version of 2048 number puzzle game. Swipe to move all tiles. 4096 Hexa. Most addictive mobile game 2048 with more features and challenges. Beyond Gravity.

The Goat Rampage The most ridiculous animal simulator available for the Android. You're just a stupid Goat, but you're about to make the biggest rampage this world has ever seen. DicePlayer. GlassesOff. The keeping of a headache diary / migraine diary is a recommended practice to help detail the characteristics of personal headaches, including triggers and remedies. The headache diary is a tool that can help you tracking your headaches and generate detailed reports for your health care provider. ** The number 1 selling headache diary on the Android Market **

HandyCalc Calculator. Complete construction calculator with simple inputs. 5 Best Free Download Manager Applications for Android. Are you tired of the slow browser downloading and looking for a better way to download files on your Android device? Well, then download manager is the best solution for you. Download manager is a program designed to ease the process of downloading files. It accelerates downloads by splitting files into multiple sections and downloading them simultaneously, and therefore speed up the download process.