The many ways lasers help us see the world more clearly. Image copyright Thinkstock Think of lasers and what springs to mind? 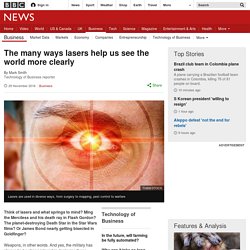 Ming the Merciless and his death ray in Flash Gordon? The planet-destroying Death Star in the Star Wars films? Or James Bond nearly getting bisected in Goldfinger? Weapons, in other words. Only recently, defence and aerospace firm Lockheed Martin trialled a 30-kilowatt laser called Athena that managed to burn a hole in a truck engine a mile away. And in October, it revealed that it was developing a new generation of "super" lasers that funnel several lasers into one very powerful beam, with the eventual intention of mounting one on a US army vehicle. Image copyright Lockheed Martin But lasers have also had a long history of peaceful civilian use in devices as diverse as CD players, medical scanners, fibre optic cables and crime detection kits. Medicine and surgery are being transformed thanks to highly accurate laser scalpels and laser diagnostics.

Now lasers could even help us see through walls and into the earth. World's oldest person Emma Morano celebrates 117th birthday. Image copyright Getty Images When Emma Morano was born, Umberto I was still reigning over Italy, Fiat had only just been established and Milan Football Club was still a few weeks off creation. 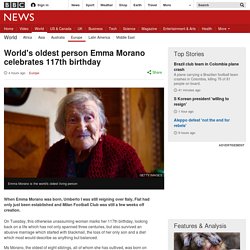 On Tuesday, this otherwise unassuming woman marks her 117th birthday, looking back on a life which has not only spanned three centuries, but also survived an abusive marriage which started with blackmail, the loss of her only son and a diet which most would describe as anything but balanced. Ms Morano, the oldest of eight siblings, all of whom she has outlived, was born on 29 November, 1899, in the Piedmont region of Italy. This year, she officially became the world's oldest living woman, after American Susannah Mushatt Jones died in May, and the last person still living born in the 1800s. Raw eggs and biscuits It was a regime she took up as a young woman, after the doctor diagnosed her with anaemia shortly after the World War One.

The killer the police missed. Amazing white rainbow snapped over Scottish moor. How will India destroy 20 billion banknotes? Image copyright AP India's central bank will have to destroy, by one estimate, some 20 billion "expired" banknotes after it scrapped two high-value denominations - the 500 ($7.60) and 1,000 rupee notes - this month to crack down on "black money" or illegal cash holdings. 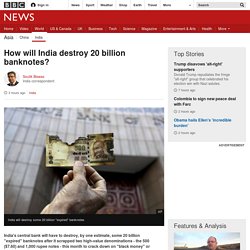 To give some idea of the amount of the currency that represents - there were more than 90 billion banknotes in circulation in India last March. Most central banks destroy soiled and mutilated banknotes on a regular basis and replace them with new, crisp ones. The Reserve Bank of India, similarly, shreds such notes and makes briquettes of them. But they are not your usual briquettes. Briquettes - usually made of farm waste in India - are used for cooking, lighting and heating. But briquettes made out of shredded cash are brittle and serve no such purpose, a senior central bank official told me. Image copyright AFP Central bank officials believe shredding 20 billion banknotes will not be a huge challenge. Trump disavows 'alt-right' supporters.

Donald Trump has repudiated the fringe "alt-right" group that celebrated his election win with Nazi salutes. 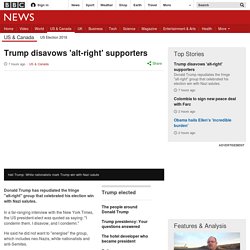 In a far-ranging interview with the New York Times, the US president-elect was quoted as saying: "I condemn them. I disavow, and I condemn. " He said he did not want to "energise" the group, which includes neo-Nazis, white nationalists and anti-Semites. Alt-right supporters were filmed on Saturday in Washington DC cheering as a speaker shouted: "Hail Trump. " In the video, Richard Spencer, a leader of the "alt-right" movement, told a conference of members that America belongs to white people, whom he described as "children of the sun". He denounced the movement's critics as "the most despicable creatures who ever walked the planet". "Hail Trump, hail our people, hail victory! " The latest news What did Trump's NYT interview tell us? Trump's 'jail Clinton' U-turn backlash The city where Trump hates being hated.