Tiger Woods Car Crash Bad Publicity for Rich Isleworth. The celebrities and the superrich who live in Isleworth, including Tiger Woods, would like to project a common touch. 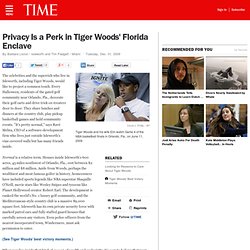 Every Halloween, residents of the gated golf community near Orlando, Fla., decorate their golf carts and drive trick-or-treaters door to door. They share lunches and dinners at the country club, play pickup basketball games and hold community events. "It's pretty normal," says Ravé Mehta, CEO of a software-development firm who lives just outside Isleworth's vine-covered walls but has many friends inside. Normal is a relative term. Houses inside Isleworth's 600 acres, 45 miles southwest of Orlando, Fla., cost between $2 million and $8 million. When you live inside that kind of cocoon of wealth and exclusivity, it's easy to believe that your privacy trumps everyone else's. Technically, Woods isn't legally obligated to say anything more to the cops, who said over the weekend that alcohol was not involved in the accident. How the Tiger Woods scandal may emotionally affect his golf game. Here’s the obligatory Tiger Woods post on the blog.

Whenever Tiger gets back to the course, some are wondering how his current travails will impact his golf game. NPR’s Shots interviewed a sports psychologist about the issue. Gregg Steinberg, author of Mental Rules for Golf, cites the so-called “triad of toughness,” – physical, mental and emotional: For a golfer, says Steinberg, physical toughness means you have components like a great swing and the right stance. Mental toughness is having confidence and optimism about your performance. Emotional toughness is where the current scandal is likely to take a toll. And that, according to Stenberg, can affect his game: “He could take the negativity and believe the media is out to get him and let it drain him.” Tiger Woods is not as good as he used to be, says Rory McIlroy. Lee Westwood has had to take time out from his preparations for the Honda Classic in Palm Beach Gardens to come to the defence of his Ryder Cup team-mate Rory McIlroy, who had followed up last week's remark about Tiger Woods's lack of form with an essay on the subject suggesting that the world's most famous player had lost his aura. 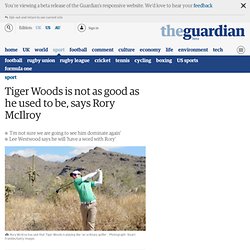 Westwood, who lost the world No1 ranking to Martin Kaymer this week after failing to get beyond the second round at the Accenture Match Play Championships, with Woods slumping to No5, said: "That's the answer a 21-year-old will give, isn't it? Gatorade Drops Tiger Woods Drink. In this product image provided by PepsiCo., Gatorade Tiger Focus drink is shown. 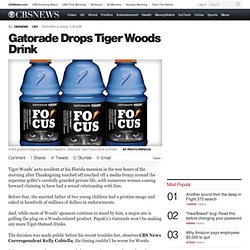 AP Photo/PepsiCo. Tiger Woods' auto accident at his Florida mansion in the wee hours of the morning after Thanksgiving touched off touched off a media frenzy around the superstar golfer's carefully guarded private life, with numerous women coming forward claiming to have had a sexual relationship with him. Before that, the married father of two young children had a pristine image and raked in hundreds of millions of dollars in endorsements. And, while most of Woods' sponsors continue to stand by him, a major one is pulling the plug on a Woods-related product. Official World Golf Ranking. The Official World Golf Ranking is a system for rating the performance level of male professional golfers (although there is no rule prohibiting women from being ranked). It was introduced in 1986 and is endorsed by the four major championships and six major professional tours, five of which are charter members of the International Federation of PGA Tours: Points are also awarded for high finishes on other tours: Web.com Tour, the official developmental tour for the PGA TourChallenge Tour, the official developmental tour for the European TourPGA Tour Canada, which became a full member of the Federation in 2009 under its former name of the Canadian Professional Golf TourOneAsia Tour, not a member of the Federation, but a joint venture between two charter members and two other tours that became full members in 2009Korean Tour, from 2011PGA Tour Latinoamérica, from 2012Asian Development Tour, the official developmental tour for the Asian Tour, from 2013[1]PGA Tour China, from 2014[2]

The article also said that a new prenuptial agreement is in the works. Today, Gerald Posner of the Daily Beast writes that Woods will likely soon pay his wife $5 million and that the prenup could ultimately fetch her $55 million after two years. Other financial dealings have been rumored as well. One of Woods' alleged mistresses, Rachel Uchitel (PHOTOS), was reportedly scheduled to admit to having an affair with Woods today but it was canceled at the last moment, which coincided with a RadarOnline.com report that Woods' representatives offered Uchitel $1 million to remain silent. 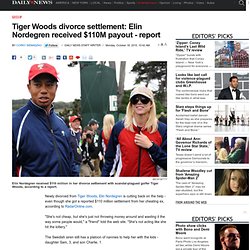 Newly divorced from Tiger Woods, Elin Nordegren is cutting back on the help - even though she got a reported $110 million settlement from her cheating ex, according to RadarOnline.com. "She's not cheap, but she's just not throwing money around and wasting it the way some people would," a "friend" told the web site. "She's not acting like she hit the lottery. " The Swedish siren still has a platoon of nannies to help her with the kids - daughter Sam, 3, and son Charlie, 1.

"But she has cut back some of the hours some people work," the friend said. How else is Nordegren cutting back? Shamed golfer Tiger Woods is 'reunited with his family' By Kate Loveys Updated: 03:31 GMT, 8 February 2010 Tiger Woods has been reunited with his children for the first time in more than a month, it has been reported. The shamed golfer is said to have been picked up from an addiction clinic by his wife Elin Nordegren in time for their son Charlie's first birthday. Miss Nordegren, who also has a two-year-old daughter by Woods called Sam, is believed to have given him six months to save their marriage.

Before the tears: Elin Nordegren and Tiger Woods. Miss Nordegrin has apparently given her husband six months to save their marriage His squeaky-clean image was destroyed by claims of affairs with a string of women, including cocktail waitresses and party hostesses. Study shows Tiger Woods impact on Nike and Golf - Business Review USA. Nike sees impact from Tiger Woods absence. Nike’s Loyalty to Tiger Woods Pays Off. Ad Age posted an article recently about Tiger Woods and his effect on Nike. Everyone knows the story of his scandal, so no need to go into that, but they decided to take another approach. Some of his top sponsorship deals for companies, Gatorade, AT&T, and Accenture felt his scandal would be disastrous for their image. They decided to cut bait and drop Tiger from as a sponsor. Others such as Nike, EA Sports, NetJets, and TLC Laser Eye Centers have decided to keep him on board but limiting his role for the time being.

Some questioned whether keeping him on board as a sponsor would hurt sales and the bottom line for their company. Rory McIlroy discusses Tiger's scandal. Tiger Woods Exclusive Interview from ESPN SportsCenter. Young Americans seem content to be faces in crowd, rather than face of golf. Robert Beck/SI Bubba Watson, 32, has three career PGA Tour wins.

I once thought the decline of American golf was just a rumor, a ghost story told at the Ryder Cup. You've heard the story, right? Tiger and Phil and the boys get creamed, the lords of Europe sing and dance, and the game of golf prepares for a new world order. Then we'd get to Augusta National and watch Tiger and Phil swap green jackets and everyone would pronounce the state of golf in the U.S. as strong as Manila hemp. In a recent interview with the Associated Press, Bubba Watson said he was not ready to be the face of American golf, despite his three PGA Tour wins, 32 years of age and oodles of game. It was an honest answer, but it spoke to a mindset that seems prevalent among young American golfers, an acceptance of "good" rather than a full out sprint toward "exceptional. "

Financial impact for golf felt all around with Tiger Woods gone. By Michael McCarthy, USA TODAY Tiger Woods' self-imposed exile could cost him millions in endorsement dollars and winnings. 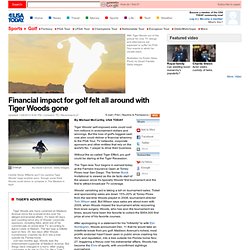 But the loss of golf's biggest cash cow also could deliver a financial whammy to the PGA Tour, TV networks, corporate sponsors and other entities that rely on the world's No. 1 player to drive their business. Tiger’s Return Expected To Make PGA Ratings Roar. When Tiger Woods tees off later today at the Accenture Match Play Championship, he won't be the only one relieved by his return to the links. 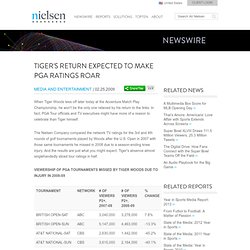 In fact, PGA Tour officials and TV executives might have more of a reason to celebrate than Tiger himself. The Nielsen Company compared the network TV ratings for the 3rd and 4th rounds of golf tournaments played by Woods after the U.S. Open in 2007 with those same tournaments he missed in 2008 due to a season-ending knee injury. And the results are just what you might expect: Tiger's absence almost singlehandedly sliced tour ratings in half.

The average household rating/share for the 2007-08 tournaments played by Tiger was 3.3/8. For the record, Tiger won last year's Accenture Match Play Championship in front of an average 4.2 million TV viewers tuned to NBC. The "Tiger Effect" extends beyond TV ratings; it has an impact on web traffic, as well. How Tiger Woods Destroyed $12 Billion of Stock-Market Value - Deal Journal. How much can one car crash cost? If you are Tiger Woods, as much as $12 billion. That is the amount Tiger’s corporate sponsors lost in stock value since he crashed his sport-utility vehicle the day before Thanksgiving, according to a study from two economics professors. Associated Press Much has been written and said about the impact the scandal would have on Tiger’s personal wealth. The world’s best golfer derives 90% of his income from endorsements, appearance fees, licensing agreements and a host of other off-the-course activities.

More difficult to determine, though, is how the scandal would hit his corporate sponsors. Tiger Woods' Affairs Cost Billions in Stock Market. Tiger Woods' extramarital affairs could cost you if you hold stock in a company he sponsors or a mutual fund that holds stock in those companies. A new study — not yet published in a journal — finds the market value lost to companies that had the golfer as a sponsor is already as high as $12 billion. The estimate is separate from whatever money Woods himself may lose as a result of his missteps.

The golfer was thought to make about $100 million a year in endorsement income. "Total shareholder losses may exceed several decades' worth of Tiger Woods' personal endorsement income," said Victor Stango, a professor of economics at the University of California, Davis and co-author of the study.