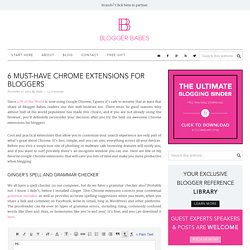 There must be good reasons why almost half of the world population has made this choice, and if you are not already using the browser, you’ll definitely reconsider your decision after you try the next six awesome Chrome extensions for bloggers. Cool and practical extensions that allow you to customize your search experience are only part of what’s great about Chrome. It’s fast, simple, and you can sync everything across all your devices. 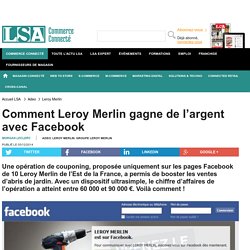 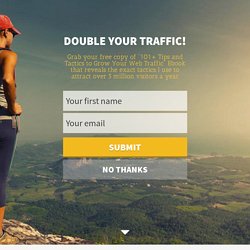 You need to grow your followers. Twitter is one of the many social media platforms that allow businesses to market and advertise itself without the use of additional manpower or expensive resources. The concept around Twitter is that you tweet with a limited character count of 140 which forces you to think about your tweet. You then put some #hashtags into your tweets, which simply work as tags grouping together tweets containing the same thought. As a registered user, you are allowed to retweet, share, and follow numerous sites which could gain you new followers as well. But no one follows me. How to Save Six Hours a Week on Social Media. 210 Flares Filament.io 210 Flares × You know the feeling. 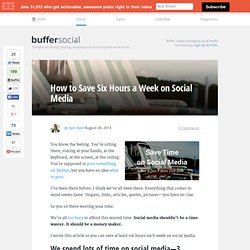 You’re sitting there, staring at your hands, at the keyboard, at the screen, at the ceiling. You’re supposed to post something on Twitter, but you have no idea what to post. The 10 Commandments of Social Media Content Marketing. In 1997 the first social network was created called sixdegrees.com and was the forerunner of the modern social networks that started to gain traction in 2002. 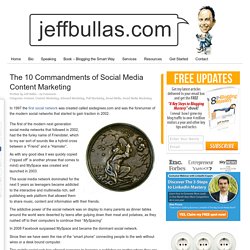 The first of the modern next generation social media networks that followed in 2002, had the the funky name of Friendster, which to my ear sort of sounds like a hybrid cross between a “Friend” and a “Hamster”. As with any good idea it was quickly copied (“ripped off” is another phrase that comes to mind) and MySpace was created and launched in 2003. This social media network dominated for the next 5 years as teenagers became addicted to the interactive and multimedia rich, self publishing web platform that allowed them to share music, content and information with their friends. The addictive power of the social network was on display to many parents as dinner tables around the world were deserted by teens after gulping down their meat and potatoes, as they rushed off to their computers to continue their “MySpacing” 1. 2. 3. 4. 5. 6. 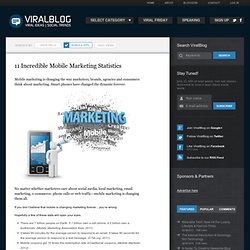 Smart phones have changed the dynamic forever. No matter whether marketers care about social media, local marketing, email marketing, e-commerce, phone calls or web traffic—mobile marketing is changing them all. Database Error. Selling Through Social Media to Close More Leads - Insideview. Marketing et médias sociaux aux États-Unis : les blogs déclinent, Facebook (et LinkedIn) triomphent. 6 ways to optimize your business with Foursquare. Posted byTinaon to Marketing, Social Media What is the hottest mobile trend for 2010? The answer seems obvious. It’s Foursquare, the Twitter of 2010, the leading location-based social network which, with a game aspect, encourages people to explore their neighborhoods via their smartphones, share their visits with local attractions, events and businesses and gives them rewards when they do so. Further than that, Foursquare, which in April 2010 reached a million users in just over a year of existence, is driving new online strategies for businesses. 1.

First thing to do is visit Foursquare website and search for your business to see if it is already listed. 2. Businesses can offer discounts or special offers to reward people who “check-in” their establishment and develop stronger relationships with their customers. 3. The Marketing Secret About Twitter That Most People Don’t Know. Twitter is maybe the most misunderstood and under estimated social media marketing tool in the social media top 5 including Facebook, YouTube and LinkedIn. 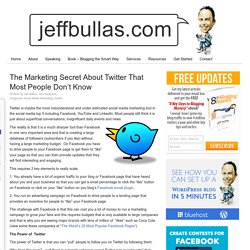 Most people still think it is just about superficial conversations, insignificant daily events and news. 11 New Twitter Facts, Figures and Growth Statistics plus [INFOGRAPHIC] 5 Top Facebook Apps to Market your Business and Brands. There are two companies we can blame for creating time wasting “apps” and ecosystems on the social web that distract us from the serious matters at hand every day. 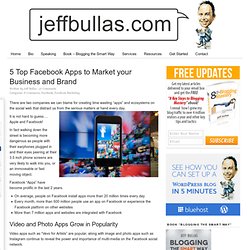 It is not hard to guess…. Apple and Facebook! In fact walking down the street is becoming more dangerous as people with their earphones plugged in and their eyes peering at their 3.5 inch phone screens are very likely to walk into you, or an immoveable or fast moving object. Facebook “Apps” have become prolific in the last 2 years. On average, people on Facebook install apps more than 20 million times every dayEvery month, more than 500 million people use an app on Facebook or experience the Facebook platform on other websitesMore than 7 million apps and websites are integrated with Facebook. 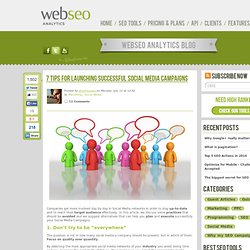 In this article, we discuss some practices that should be avoided and we suggest alternatives that can help you plan and execute successfully your Social Media Campaigns. 1.