China’s Turmoil May Stall Rebound in Watch Sales. Photo TAIPEI, Taiwan — After nearly three years of government austerity and slow economic growth, sales of luxury watches in China are showing signs of rebound — although many factors, including the recent weakening of the renminbi and stock market turmoil, could stall that momentum again. 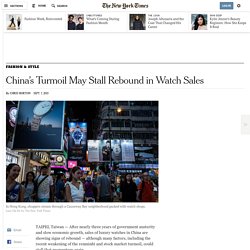 Swiss watches enjoy a near-monopoly on the luxury watch market in China, and also in Hong Kong, which is not subject to mainland tariffs on luxury goods. A popular shopping destination, Hong Kong is also a center for shipping and re-export. From 2005 to 2012, the value of watch exports to China from Switzerland grew 370 percent, to 1.6 billion Swiss francs, or $1.64 billion, from 351.6 million Swiss francs, according to industry data. During the same period, exports to Hong Kong grew to 4.4 billion francs, from 1.8 billion francs, an increase of 144.7 percent. Beginning in late 2012, however, Chinese demand for luxury watches took a hit.

Currency movements are also an issue. Mr. Photo. Falling gold price a ‘positive’ for luxury brands. Luxury jewellers face challenges on numerous fronts — but a battered gold price is not one of them, making the sector one of the few winners amid a global commodities rout. 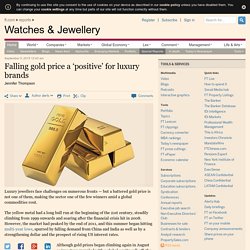 The yellow metal had a long bull run at the beginning of the 21st century, steadily climbing from 1999 onwards and soaring after the financial crisis hit in 2008. However, the market had peaked by the end of 2011, and this summer began hitting multi-year lows, spurred by falling demand from China and India as well as by a strengthening dollar and the prospect of rising US interest rates. Although gold prices began climbing again in August as investors grappled with a global equity sell-off, the price is still about 40 per cent down from its historic peak of $1,900.20 in May 2011.

“Gold [price] is not an issue and raw prices have been a benefit,” says Erwan Rambourg, luxury analyst at HSBC. “The fact is it’s a positive, and on a net basis [the luxury industry will] gain at the gross margin level.” UK fashion tipped to create thousands of jobs. Demand for designer fashion made in the UK has the potential to grow rapidly in the next few years and create thousands of jobs, according to the British Fashion Council. 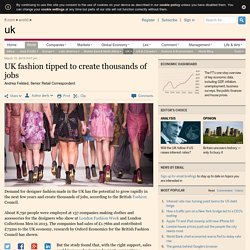 About 8,750 people were employed at 137 companies making clothes and accessories for the designers who show at London Fashion Week and London Collections Men in 2013. The companies had sales of £1.76bn and contributed £732m to the UK economy, research by Oxford Economics for the British Fashion Council has shown. Economy Of Fashion: How Different Trends Reflect The Financial State. It's common knowledge fashion is cyclical in nature.

The concept of “newness” in fashion doesn't refer to the premiere of a trend, but rather its revival. Why fashion cycles in this manner, however, is less obvious. There are lots of factors at play: cultural trends, politics, celebrity influence. China leading world towards global economic recession, warns Citi. How fashion is shaping the UK economy. 27 April 2015SEO Team London celebrated its 61st Fashion Week this year Written by Caroline LeekContent Manager London celebrated its 61st Fashion Week (LFW) last February, a highlight of the international fashion and retail calendar which turned global attention to the UK. 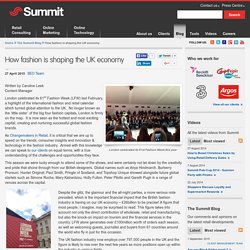 No longer known as the ‘little sister’ of the big four fashion capitals, London is firmly on the map. It is now seen as the hottest and most exciting capital, creating and nurturing successful global fashion brands. As Changemakers in Retail, it is critical that we are up to speed on the trends, consumer insights and innovation & technology in the fashion industry. This season we were lucky enough to attend some of the shows, and were certainly not let down by the creativity and pride that shone through from our British designers. Why does India struggle to produce luxury brands? - BBC News. 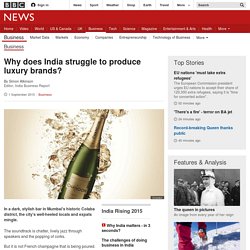 The soundtrack is chatter, lively jazz through speakers and the popping of corks. But it is not French champagne that is being poured. This is an evening to promote something made much closer to home. After just a couple of years, Chandon is one of the best-selling Indian sparkling wines - produced with grapes grown a couple of hundred kilometres outside of Mumbai. Costing 1,200 rupees ($18; £11.60) a bottle in the shops, it is being marketed as affordable but also luxurious - something Chandon's owners, the French drinks group Moët Hennessy, know plenty about. India's thirst for expensive spirits, especially whisky - made investment in the wine industry an easy decision, says the firm's president of wines Jean-Guillaume Prats.

"There's clearly a base of consumers who want the Veuve Clicquot, the Krug," he says. But do they really? Image copyright Getty Images.