How to Engage Students in Historical Thinking Using Everyday Objects. Social studies students regularly consider the past through its written and material culture, whether that means diving into daily life in colonial America through letters or examining ancient coins to better understand the spread of the Roman Empire. 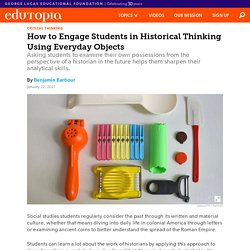 Students can learn a lot about the work of historians by applying this approach to items from their own daily lives. I’ve found that if I remind my students that in the future, our lives and culture will be reconstructed in a similar fashion, they’re intrigued, and if I challenge them to imagine what a student 100 or 200 years from now might infer when examining a contemporary artifact, they’re keen to get to work. It might seem like an unorthodox approach, but again and again, my students have analyzed their own artifacts within this historical framework and have been pushed to think in new ways, both creatively and conceptually. Step 1: Explain What Artifacts Are Step 2: Share How to Analyze Artifacts Who used it? What is its significance?

The Treaty of Waitangi 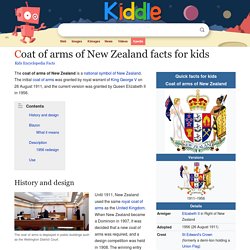 The initial coat of arms was granted by royal warrant of King George V on 26 August 1911, and the current version was granted by Queen Elizabeth II in 1956. History and design The coat of arms is displayed in public buildings such as the Wellington District Court. Until 1911, New Zealand used the same royal coat of arms as the United Kingdom. When New Zealand became a Dominion in 1907, it was decided that a new coat of arms was required, and a design competition was held in 1908. Since being granted its own arms in 1911, New Zealand's arms have remained similar to the current design, with minor changes in 1956. Before 1956, the shield was identical, but the surrounding features were different. The original supporters were also slightly different. Blazon What it means The shield is first described. New Zealand coat of arms – Nation and government. Famous New Zealanders. Scroll down for our collection of famous New Zealanders notebooking pages and mini printable booklets for home and school projects. 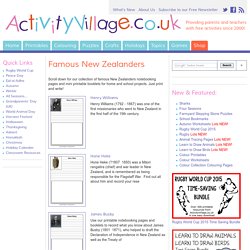 Just print and write! Henry Williams (1792 - 1867) was one of the first missionaries who went to New Zealand in the first half of the 19th century. Hone Heke (? 1807  1850) was a Māori rangatira (chief) and war leader in New Zealand, and is remembered as being responsible for the Flagstaff War. Find out all about him and record your rese Use our printable notebooking pages and booklets to record what you know about James Busby (1801  1871), who helped to draft the Declaration of Independence in New Zealand as well as the Treaty of Tāmati Wāka Nene (c. 1785 - 1871) was a Māori rangatira (chief) who fought as an ally of the British in the Flagstaff War. 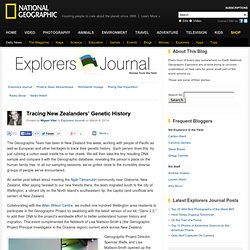 Each person does this by just rubbing a cotton swab inside his or her cheek. We will then take the tiny resulting DNA sample and compare it with the Genographic database, revealing the person’s place on the human family tree. In all our sampling sessions, we’ve gotten close to the incredibly diverse groups of people we’ve encountered. An earlier post talked about meeting the Ngāi Tāmanuhiri community near Gisborne, New Zealand. After saying farewell to our new friends there, the team migrated south to the city of Wellington, a vibrant city on the North Island’s southeastern tip, the capitol (and unofficial arts center) of New Zealand. A Wellington, New Zealand resident swabs with Genographic ProjectPrincipal Investigator, Lisa Matisoo-Smith, to participate in theGenographic Project. Kiwiana. Museum of New Zealand Te Papa Tongarewa, Wellington, NZ. Auckland New Zealand. Update from Rangiroa - Hokulea.