(8) What is a Makerspace? Introduction to Makerspace. Makerspace. ​The maker movement is about teaching and learning that is focused on student centered inquiry. 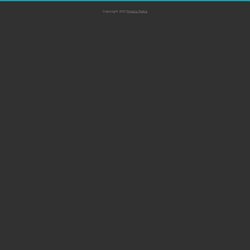 This is not the project done at the end of a unit of learning, but the actual vehicle and purpose of the learning. The time to change education is needed now more than ever. We are facing an educational system in crisis and a global economy feeling the ripple effect of this failure (Wagner, 2012). Wagner captured the voice of business leaders describing the need for students to graduate with the skills of creativity and innovation, and that our educational institutions are failing to meet this mark (2012). “There are essential elements of educating young people to become innovators: the value of hands-on projects where students have to solve a real world problem and demonstrate mastery; the importance of learning to draw on academic content from multiple disciplines to solve a problem; learning to work in teams” (Wagner & Compton, 2012, p. 52). What Is the Point of a Makerspace? What is maker pedagogy? So what do we mean by “Maker Pedagogy”? 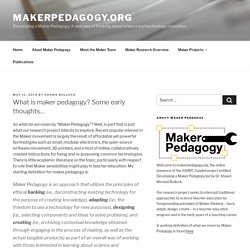 Well, in part that is just what our research project intends to explore. Recent popular interest in the Maker movement is largely the result of affordable yet powerful technologies such as small, modular electronics, the open-source software movement, 3D printers, and a host of online, collaboratively created instructions for fixing and re-purposing common technologies. There is little academic literature on the topic, particularly with respect to role that Maker sensibilities might play in teacher education. My starting definition for maker pedagogy is: This research project hopes to bring these principles of Maker thinking to the foreground in science teacher education, both in a pre-service program and in the early years of a career. Makerspaces / Future-focused learning / Teaching. Makerspaces around the world are part of a growing movement of hands-on, mentor-led learning environments that celebrate grass roots innovation and DIY (Do-it-yourself) culture. 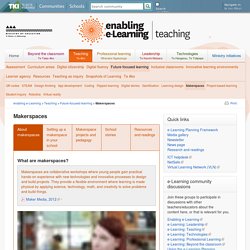 At the core of the the maker movement is the notion that we aren't just passive consumers of new technologies – we can be producers too. Maker faire The cultural epicentre of the maker movement is the Maker Faire – an all-ages gathering for hobbyists, educators, students, designers, tech-enthusiasts, artists, and engineers to show-and-tell their latest DIY projects and innovations.

The first maker faires were organised by Make Magazine , the defining publication of the maker movement in the US, but local maker communities have since popped up all over the world. Makers tend to stay connected through online community spaces and social media, as well as through their local makerspaces. Sharing A guiding principal of maker culture is sharing. Makerspace Educators Need Professional Development, Too. During my tenure as technology director at St. 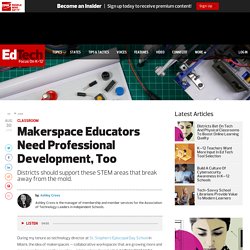 Stephen’s Episcopal Day School in Miami, the idea of makerspaces — collaborative workspaces that are growing more and more popular across the country — intrigued me, from both a pedagogical and a technological perspective. I decided to base my doctoral thesis on them: “Tinkering in K–12: An Exploratory Mixed Methods Study of Makerspaces in Schools as an Application of Constructivist Learning.” What I found during my research was that more professional development on makerspaces is desperately needed.

In fact, an astounding 40 percent of makerspace teachers reported that they had received no PD on makerspaces at all. That’s 40 percent too many. Teachers May Be Unfamiliar With Makerspace Pedagogy When transitioning to a makerspace, the focus often shifts to the shiny tools (3D printers! The transition to the freedom of a makerspace can be a shock for students, and it can be challenging for educators to relinquish control. Makerspace pedagogy. Search Wellington, NZ Monday, March 18, 2019 Education Central Advertisement Home Tags Makerspace pedagogy Tag: Makerspace pedagogy Latest Teacher-led Innovation Fund round announced July 16, 2018 By subscribing, you accept our website terms of use and Privacy policy. 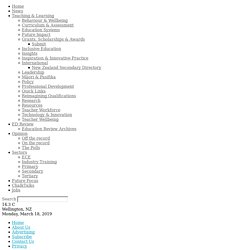