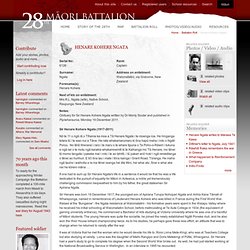 I te timatanga o te whawhai kāore awau i haina. When war broke out I did not enlist immediately. Haere rā, e Tā! Māori Battalion - March to Victory. Skip to content Register Registering with NZ On Screen means you can: save favourites comment on and discuss titles receive updates via email about what's happening in the site – if you want to Register now We won't share your data with anyone (see our Privacy Policy) and we won't spam you. 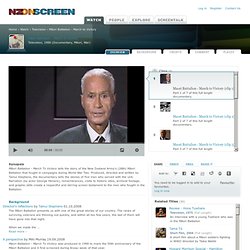 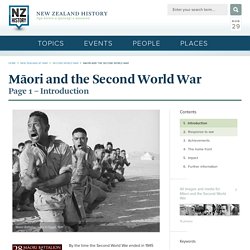 The pinnacle of its achievement was the Victoria Cross won by Te Moananui-a-Kiwa Ngarimu in 1943. Ultimately, nearly 16,000 Maori enlisted for service during the Second World War. New Zealanders reacted with patriotic fervour to the outbreak of war in South Africa in 1899 and again when the First World War began in 1914. Imperial policy had officially excluded Maori from fighting in South Africa, but a number still enlisted. 4. Second World War: the Māori war effort – Ngā pakanga ki tāwāhi – Māori and overseas wars. Māori in the fighting forces We’ll fight right to the end. 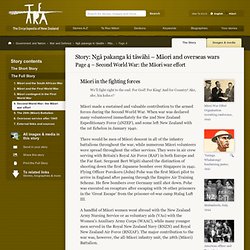 For God! For King! And for Country! Ake, ake, kia kaha e! Māori made a sustained and valuable contribution to the armed forces during the Second World War. 28th Maori Battalion. Ngarimu, Te Moananui-a-Kiwa – Biography. Page 1 - Biography Ngarimu, Te Moananui-a-Kiwa Ngati Porou and Te Whanau-a-Apanui; soldier This biography was written by Whai Ngata and was first published in the Dictionary of New Zealand BiographyVolume 5, 2000 Te Moananui-a-Kiwa Ngarimu was born into Te Aitanga-a-Mate of Ngati Porou at Whareponga, on the East Coast, on 7 April 1919, the son of Hamuera Meketu Ngarimu, and his wife Maraea. 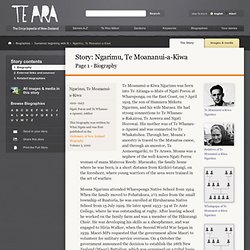 He had strong connections to Te Whanau-a-Rakairoa, Te Aowera and Ngati Horowai. Moana Ngarimu attended Whareponga Native School from 1924. On 1 May 1940 the main body of the Maori Battalion left the showgrounds in Palmerston North, where they had been training, and marched to the railway station and travelled to Wellington. Prince Harry pays tribute to NZ vets at Monte Cassino. Flanked by New Zealand veterans with long rows of medals pinned to their chests and greeted by Maori chants and ceremonies, Prince Harry paid tribute to the terrible price paid by Kiwis who fought at the Battle of Monte Cassino in the Second World War. 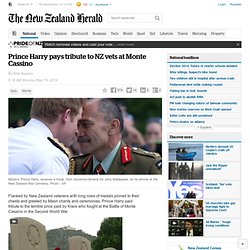 Video The Prince laid a wreath at a tall Cross of Sacrifice in the Commonwealth War Cemetery in the town of Cassino, where 456 New Zealand soldiers are buried and another 55 commemorated on a memorial because their remains were never recovered. Prince Harry greets a New Zealand veteran at Monte Cassino. Including prisoners and wounded, the New Zealanders suffered nearly 1,400 casualties in the battle, one of the most brutal of the European theatre. Looming over the cemetery was the squat, fortress-like monastery of Monte Cassino, which became an object of fear and hatred for many Allied troops during the five months that they tried to take it from the Germans in 1944. "They were about 75 yards away. "Some of my mates didn't make it. War and the 28th (Māori) Battalion / Teachers' notes / Home - Kia Mau. Navigate in: Māori | English In ancient times, battles were a feature of Māori life. 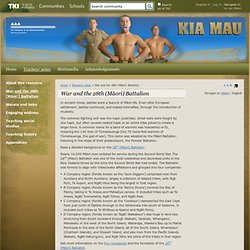 Even after European settlement, battles continued, and indeed intensified, through the introduction of muskets. The common fighting unit was the hapū (subtribe). Small wars were fought by one hapū, but often several related hapū or an entire tribe joined to create a larger force. A common name for a band of warriors was hokowhitu-a-Tū, meaning the 140 men of Tūmatauenga (the 70 twice-fold warriors of Tūmatauenga, the god of war). Read a detailed background on the 28th (Māori) Battalion. Nearly 16,000 Māori men enlisted for service during the Second World War. A Company region (fondly known as the ‘Gum Diggers’) comprised men from Auckland and North Auckland, largely a collection of related tribes, with Ngā Puhi, Te Aupori, and Ngāti Hine being the largest in that region.