How Kylie Jenner Built a Sprawling Audience—and a Booming Brand—at Age 18. There are few narratives in modern celebrity culture as unexpected as the ascent of the Kardashian-Jenner family. 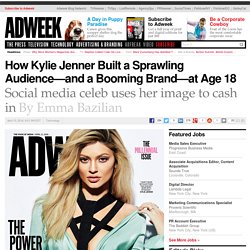 When they first appeared on America's televisions in 2007 as the stars of E! 's reality series Keeping Up With the Kardashians, few could have guessed that within nine years, daughter Kim would become a massive, global celebrity; that patriarch (and former Olympian) Bruce would transition to Caitlyn; that matriarch Kris would sit atop a billion-dollar empire—or that the youngest daughter, Kylie, just 9 when the show launched, would find herself an online superstar, budding entrepreneur and millennial icon. Now 18, Jenner is the embodiment of an entirely new type of celebrity, one that didn't exist only a few years ago. Puma Feels the Rihanna and Kylie Jenner Sellout Effect. Puma's German execs are happy with the company's performance in the first half of 2016, where sales rose 10 percent at constant exchange rates, though a strong U.S. dollar put a dent in gross profit margins. 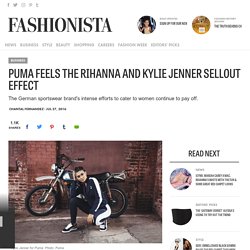 Net profits, however, rose by 27.6 percent to €27.4 million, about $30 million. Europe, the Middle East and Africa are still Puma's strongest combined region, where footwear, apparel and accessories all grew by double digits and sales overall increased by 14 percent. "We continue to see better sell-out of our products in the stores, as we feel consumers are getting more interested in our brand and products again," said CEO Bjørn Gulden in a statement. The biggest growth drivers were the year's two big football tournaments, the European Championships and Copa America, and the influence of the brand's high-profile ambassadors: Rihanna and Kylie Jenner.

Rihanna and Kylie Jenner Are Boosting Puma's Sales. Puma's ongoing collaboration with Rihanna, and it's recent partnership with Kylie Jenner, are really paying off for the brand. 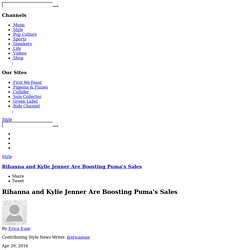 In the first three months of 2016, Puma's currency-adjusted sales have increased by 7.3 percent to €852 million, which is approximately $973 million, according to Fashionista. Once again, the recent growth in sales is attributed to its footwear. Overall the segment grew 8.5 percent, and was largely supported by its women's silhouettes. The company highlighted Rihanna's New York Fashion Week show as a driver for sales since it ultimately resulted in her Fenty trainers and fur slides flying off the shelves. How Kylie Jenner Built a Sprawling Audience—and a Booming Brand—at Age 18. Puma confirms 7-figure brand ambassador deal with Kylie Jenner - News : Media (#657150) Last week, the American press reported that footwear brand Puma signed a partnership deal with Kylie Jenner. 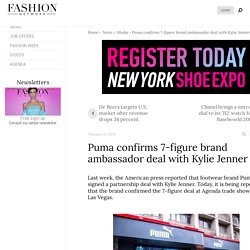 Today, it is being reported that the brand confirmed the 7-figure deal at Agenda trade show in Las Vegas. Us Weekly originally reported the news that the youngest member of the Kardashian-Jenner clan signed a 7-figure deal with Puma to be its brand ambassador. Jenner will be the face of Puma as a brand advocate supporting the brand through campaigns and personal social media outlets. The deal is unlike the brand’s partnership with Rihanna, which includes an exclusive sneaker collaboration. The 18-year old often wears Puma in her popular Instagram photos so the deal appears to be an added incentive to wearing the brand. Forbes Welcome. Kim Kardashian breaks social media silence after terrifying Paris robbery.

Kim Kardashian has broken her social media silence on Facebook for the first time since her terrifying robbery in Paris last month. 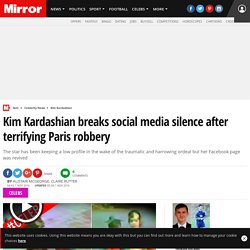 The reality star's page has been left quiet since October 3, but fans were delighted to see the star's page flooded with new posts on Monday, perhaps an indicator that business is slowly creeping back to normal. One of Kim's posts was about the Halloween throwback video from 1982 that her older sister Kourtney Kardashian posted earlier today. Kim Kardashian '60 Minutes' Interview's Five Surprises. A simpler time. 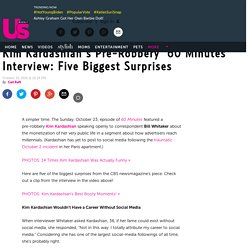 The Sunday, October 23, episode of 60 Minutes featured a pre-robbery Kim Kardashian speaking openly to correspondent Bill Whitaker about the monetization of her very public life in a segment about how advertisers reach millennials. (Kardashian has yet to post to social media following the traumatic October 2 incident in her Paris apartment.) Here are five of the biggest surprises from the CBS newsmagazine's piece. Check out a clip from the interview in the video above! Kim Kardashian Wouldn't Have a Career Without Social Media. Kim Kardashian On Talent 60 Minutes Interview. Kim Kardashian still hasn't broken her social media silence since the Paris robbery. 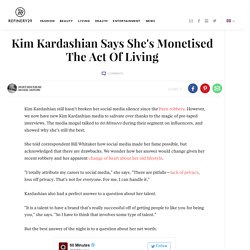 However, we now have new Kim Kardashian media to salivate over thanks to the magic of pre-taped interviews. The media mogul talked to 60 Minutes during their segment on influencers, and showed why she's still the best. Kim Kardashian On Talent 60 Minutes Interview. Celebrity, youth culture and the question of role models. The recent 2015 MTV Video Music Awards event was notable – not for the recognition of award recipients, but for the public spat between host Miley Cyrus and hip-hop artist Nicki Minaj. 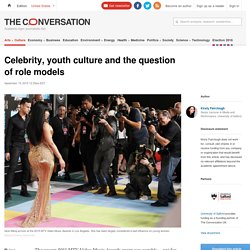 Whether real or staged, the hurling of insults and aggressive behaviour dominated mainstream press coverage of the ceremony surely much to the delight of MTV. Both Minaj and Cyrus are known for courting controversy and have been criticised for being “bad” role models for young people, particularly girls and young women. 14 Female Celebrities that Bash Hollywood's Ideal Body Image. Being a role model doesn’t mean looking like a model — and these actresses, singers, and comedians know it. 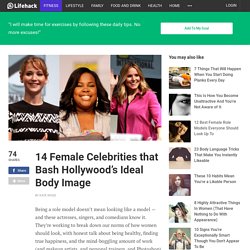 They’re working to break down our norms of how women should look, with honest talk about being healthy, finding true happiness, and the mind-boggling amount of work (and makeup artists, and personal trainers, and Photoshop) that goes into creating the Hollywood version of female beauty. Check out some of our favorite body image quotes from 14 amazing women. 1. It’s confirmed: Balmain x H&M was a total knockout. Considering the scenes of total carnage that made their way onto social media come Thursday, the fact that the Balmain x H&M collection was the store’s most successful designer collaboration won’t come as much of a surprise. 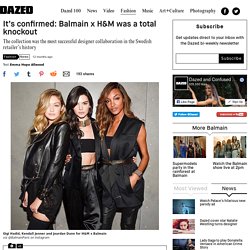 “The interest for this launch has exceeded all previous collaborations, both in-store and online,” Hacan Andersson, a rep for H&M told Bloomberg. While H&M didn’t reveal exact sales figures, the proof of the collection’s success is on Instagram, where there are just under 80,000 posts tagged with the line’s official hashtag. Balmain was H&M's most successful designer collaboration ever. Birmingham City University - Sign In. Ethics of Celebrities and Their Increasing Influence in 21st Century Society. References Abrahamson, E.: 2006, ‘Management Fashion’, Academy of Management Review 21(2), 254–285.

Carrigan, M. and I. Szmigin: 2000, ‘Advertising and. Impact of celebrity endorsement on brand loyalty:case study of MTN Saka ''i don port'' advert.