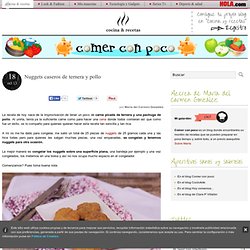 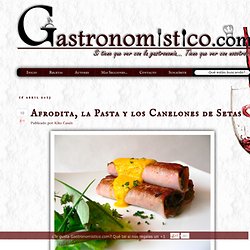 Receta: bollitos preñaos de bacon y queso. Recetas de Cocina – Ricas recetas sencillas y rapidas. Patatas rellenas de salmón - Receta - Móvil. Southern Kitchen Happenings: Southern Kitchen Happenings: Apple Dumplings Cobbler {This could become one of your favorite apple dessrts!} When we have lots of apples that are not getting eaten quick enough around my house, and need to eaten soon, the first thing I think about is Apple Dumplings Cobbler. 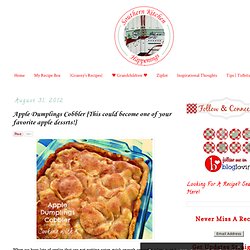 It is a combination of my Apple Dumplings recipe and my Peach Cobbler recipe. Sometimes I don't have time to mess with all the peeling and stuffing the apples. I just peel, slice, and heat the sugar, cinnamon, water, and a stick of butter until the butter melts like in the dumplings, and then pour it over the peeled apples before adding the top layer of crust. We are huge fans of double crust cobblers around here. There is just nothing better than all that yummy buttery, and flaky crust to dig into.

I used three different varieties of apples in this cobbler, which is important to get a great combination of the tart and sweet taste of the apples in the cobbler. Sausage Stuffed Mushrooms Recipe. Makin' it Mo' Betta: Bacon Wrapped Green Beans! Leave it to me to take something healthy and ruin it. 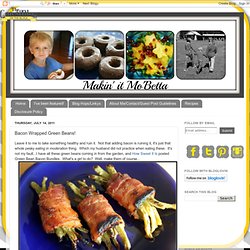 Not that adding bacon is ruining it, it's just that whole pesky eating in moderation thing. Which my husband did not practice when eating these. It's not my fault...I have all these green beans coming in from the garden, and How Sweet It Is posted Green Bean Bacon Bundles. What's a girl to do?

Well, make them of course...

Edibles: Irish Coffee Ice Pops ‹ The Boys Club. The humble Irish Coffee is getting a little bit of a makeover today. 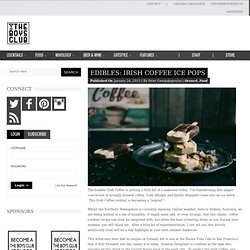 I’m transforming this simple concoction of strongly brewed coffee, Irish whiskey and lightly whipped cream into an ice block. This Irish Coffee cocktail is becoming a “poptail”! Whilst the Northern Hemisphere is currently enjoying chillier weather, here in Sydney, Australia, we are being bathed in a sea of humidity. It might seem odd, or even strange, that this classic, coffee cocktail recipe can even be tampered with, but when the heat is beating down on you during your summer, you will thank me. Chicken. Gimme some oven » Blog Archive saucy asian meatballs. 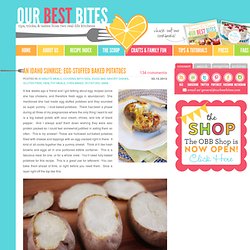 She mentioned she had made egg stuffed potatoes and they sounded so super yummy. I love baked potatoes. There has been a phase during all three of my pregnancies where the only thing I want to eat is a big baked potato with sour cream, chives, and lots of black pepper. Stuffed Cabbage. Lunch Recipes to Lose Weight. Hummus and Roasted Veggie Pizza Ingredients 1 soft tortilla shell Handful of your favorite veggies (try spinach, tomatoes, and zucchini) Hummus 1 tablespoon olive oil 1 garlic clove, minced Salt and pepper, to taste Crumbled goat cheese Directions 1. 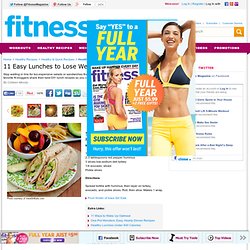 Roast veggies for about 20 minutes at 350°F with the olive oil, garlic, salt, and pepper. 2. 3. From Gina of Fitnessista What do you think of this story? Quinoa Edamame Salad 1/4 cup dry quinoa 1 cup shelled edamame 8-10 grape tomatoes, sliced in half 1/3 cup chopped onion 2-3 tablespoons vegetable broth For the dressing 2 lemons, squeezed 2 teaspoons Dijon mustard 1 teaspoon agave nectar Sprinkle of cumin or black pepper 1. 2. 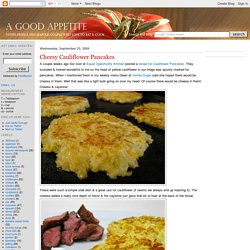 They sounded & looked wonderful to me so the head of yellow cauliflower in our fridge was quickly marked for pancakes. Baked Zucchini Chips. Well I said last week that I'd probably be up to my old tricks by now. 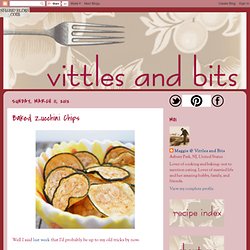 But much to my own surprise, I decided to try another 'healthy' recipe I've been thinking about - zucchini chips! If you ever look at the sidebar of my blog that lists 'popular recipes' you will see that Apple Chips are number one. They have been for a while now, but the funny part is that they are number one by a landslide. Mr. Soy Salmon with an Avocado, Lime, Wasabi Salsa. I hope you all enjoyed a long weekend break over Easter, for me it was nice to be home for four days and the sun shone all weekend long. 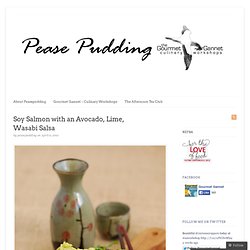 The last of our summer days I think, the gannets have all but a few flown from the colony, leaving just me behind till they return next year. We often cook this dish on the BBQ as part of several dishes but Easter weekend we decided to have it on it’s own for our Sunday brunch served on a piece of whole grain toast, very decadent. It’s a really versatile dish that can be served as an entree on its own, as a main with steam veg or even as a canapé on little crispy croutons Salmon cooks well on the BBQ, you need to remove the skin though as it will stick to the BBQ grill.