SeaWorld’s magnificent killer whale, Tilikum, may be nearing death - Candace Calloway Whiting. Depressing Time-Lapse Video Shows What SeaWorld Orcas Do All Day. This is what a SeaWorld orca does all day. 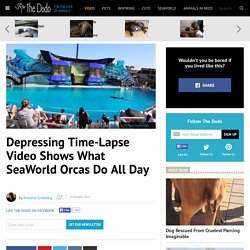 SeaWorld Orca Mom Too 'Depressed' To Nurse Baby. Recent footage taken at SeaWorld appears to show a mother orca who's too depressed to nurse her calf. 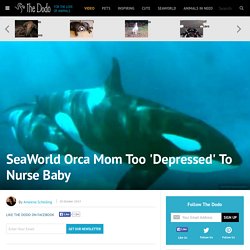 Ingrid Visser, Ph.D., a marine biologist who specializes in orcas, and John Hargrove, a former SeaWorld trainer, recently took a trip to SeaWorld San Diego with a team from Superpod, an upcoming orca documentary project. While there, they spotted an orca named Kasatka apparently refusing to nurse her calf, a 2-year-old male named Makani. YouTube/SuperpodDoc As the mother orca swims by them in her tank, her young calf can be seen bumping at her stomach. "That head-bump is a precursor to nursing," Hargrove explains. SeaWorld says it won&apos;t take beluga whales captured in Russia. SeaWorld says it no longer wants any of the captured beluga whales at the center of a legal controversy. 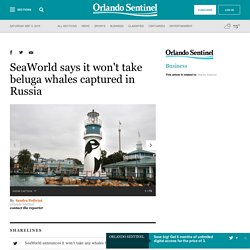 The Georgia Aquarium is trying to overturn a federal decision denying its request to import the 18 Russian whales captured several years ago. SeaWorld would have received some of them under a breeding loan. But this week, the company said on its AskSeaWorld website it won't accept any belugas from the Georgia Aquarium's permit application. The decision "reflects an evolution in SeaWorld's position since this project began more than eight years ago," the company said on its website. The statement added that its decision "does not in any way reflect judgment on those facilities leading or participating in this beluga whale conservation effort. " Last year, SeaWorld joined a pledge not to collect cetaceans captured from the wild after Feb. 14, 2014.

3 Traumatic Experiences Captive Orcas Know All Too Well. Efforts to prevent the live capture of marine animals date back to 1972 when the Marine Mammal Protection Act was passed to protect wild marine mammals from forced into captivity. 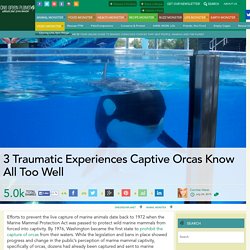 By 1976, Washington became the first state to prohibit the capture of orcas from their waters. While the legislation and bans in place showed progress and change in the public’s perception of marine mammal captivity, specifically of orcas, dozens had already been captured and sent to marine mammal parks around the world, including SeaWorld and Miami Seaquarium. Since the release of the documentary Blackfish in 2013, marine mammal facilities have taken a hit as the public, for the first time since protests in the 70s, question the captivity of orcas. Although much of the information in Blackfish wasn’t new to the scientific community, it brought global attention to captivity and just how detrimental it is on the physical and psychological well-being of orcas.

What SeaWorld Entertainment Inc.’s Stock Sinking Really Means (SEAS) Anyone who has followed SeaWorld Entertainment's (NYSE: SEAS ) spectacularly sinking share price and related business turbulence knows that the company has faced a tsunami of negativity, and its stock price has gotten torpedoed as it's been slammed in the top and bottom lines. 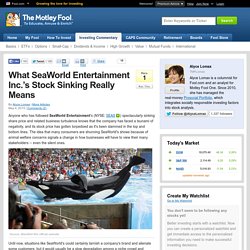 The idea that many consumers are shunning SeaWorld's shows because of animal welfare concerns signals a change in how businesses will have to view their many stakeholders -- even the silent ones. Source: Blackfish film official website Until now, situations like SeaWorld's could certainly tarnish a company's brand and alienate some customers, but it would usually be a slow degradation among a niche crowd and difficult to notice in the numbers. SeaWorld's dramatic situation is a great example of legitimate financial risk for those companies that fail to recognize consumers' evolving concerns. Cal/OSHA cites SeaWorld San Diego for safety violations; park vows to appeal. Problem loading page.

Has SeaWorld Sunk To A New Low? Born and Raised in Coconut Grove. 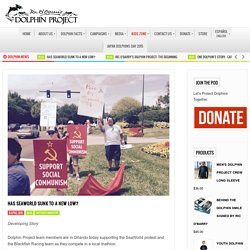 FL, Lincoln spent much of his childhood in or around the ocean. His father Richard O’Barry was the dolphin trainer for the Flipper TV series, who now works to free captive dolphins back into the wild. The first four years of his life were spent living at the original Dolphin Project headquarters. The other 2 residents at the time were Liberty and Florida, the 2nd dolphins Ric released back into the wild. The next door neighbor at the time was President Nixon. Lincoln’s first trip to Japan was around his 6th birthday. Lincoln O'Barry has worked with his father on readaptions and releases of captive dolphins in Colombia, Indonesia, Nicaragua, and the United States. In the mid 90’s, Lincoln started his own production company. 5 Truths That Totally Destroy SeaWorld’s New Ad Campaign. SeaWorld's new ad campaign is out — and it's a desperate bid to win back visitors disillusioned with the company's terrible treatment of animals. 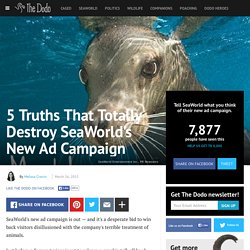 Just before a former trainer is set to release a graphic tell-all book about his experience training orca whales at the park, SeaWorld is revealing a new marketing push in stages throughout the spring. The company unveiled its new "Meet the Animals" ad campaign, which spotlights some of the individuals in its care, on Monday. First up is Leon, a 9-year-old sea lion: Yes, SeaWorld Does Take Orca Calves From Their Moms. Here's Proof. SeaWorld is backpedaling again, and no one is buying it. 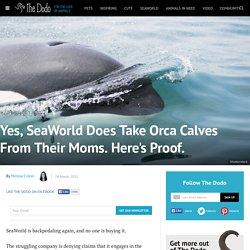 The struggling company is denying claims that it engages in the "heartbreaking" practice of separating orca moms and their babies — despite overwhelming evidence to the contrary. In an interview with NPR's Fresh Air, former SeaWorld orca trainer John Hargrove explained the tragic separation of orca Kasatka and her calf, Takara. Hargrove said: In fact, [when Takara was taken from Kasatka], she was emitting vocalizations that had never been heard before ever by anyone ... obviously Takara was gone and [Kasatka] was trying anything she could to try to locate and communicate with Takara, which is absolutely heartbreaking. Yes, SeaWorld Does Take Orca Calves From Their Moms. Here's Proof. SeaWorld’s Worst Nightmare: Calif. Lawmaker to Propose Ban on Orcas in Captivity.

In a surprising move that is sure to send shock waves across the entire captive whale and dolphin industry, a California lawmaker will propose legislation to outlaw Shamu shows at SeaWorld San Diego. 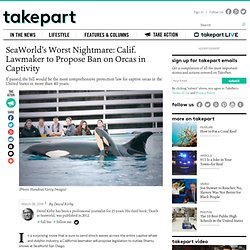 State Assemblymember Richard Bloom, D–Santa Monica, will introduce Friday the Orca Welfare and Safety Act, which would make it illegal to “hold in captivity, or use, a wild-caught or captive-bred orca for performance or entertainment purposes.” The bill would also ban artificial insemination of captive killer whales in California and block the import of orcas or orca semen from other states. Violators would face a fine up to $100,000 and/or six months in a county jail. “There is no justification for the continued captive display of orcas for entertainment purposes,” Bloom declared in a written statement prior to a press conference to be held at the Santa Monica Pier.

Exempt from the legislation are any orcas held for rehabilitation after a rescue or stranding, or for research purposes. Embattled SeaWorld Appears to be Skipping the Rose Parade This Year. Click to enlarge An image of Prayitno/Flickr SeaWorld's stock prices and attendance numbers have deflated, apparently, as a result of criticism from the PETA-promoted Shamu documentary Blackfish. 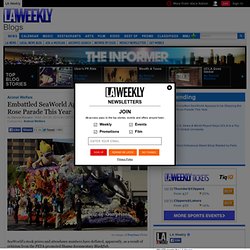 The park in summer announced the expansion of its orca whale captivity pools, a move widely believed to be a response to the criticism. Now PETA is gloating again because SeaWorld is absent from the just-announced Rose Parade float lineup, which has featured the San Diego park's entries for years. SeaWorld contre OSHA: peu importe le vainqueur, les baleines perdent à chaque fois. Captive Belugas (Living): SeaWorld San Diego, California - United States. SeaWorld’s Lasting Impact. This week, guest blogger Jeff Ventre helps to explain the devastating legacy of captivity for the Southern Resident orcas – why they are still affected by captures that happened decades ago. These efforts devastated their population, and they are still struggling to recover. Today, they face threats like prey depletion, pollution, and noisy waters. It's Safer To Work With Sea Shepherd Than At SeaWorld. For all the talk about how Sea Shepherd endangers life and limb of whalers, sealers, poachers, and even supposedly its own crew, the fact is that in more than 37 years of operations not a single Sea Shepherd crewmember has been killed or seriously injured.

This covers hundreds of voyages and confrontations on the high seas in some of the most remote and hostile waters in the world. Nor has any Sea Shepherd action ever caused a single injury, let alone a fatality to those who Sea Shepherd obstructs, harasses, and prevents from continuing their illegal acts of exploitation. One major Sea Shepherd critic is SeaWorld, whose enslavement of orca whales and dolphins has generated hundreds of millions of dollars in profits. And a SeaWorld captive — Tilikum — has killed three human beings. I can’t really blame Tilikum. By the way, I’ve met Tilikum. I knew then as I know now that Tilikum should not be, and does not belong, in a swimming pool.

SeaWorld: The devil is in the details. SeaWorld orcas performing at Loro Parque in Spain. Image: Jonesemyr/Flickr SeaWorld Entertainment Inc. took to ‘Bloomberg‘ this week in an effort to launch a PR comeback following it’s downward spiral across the board since the release of the documentary ‘Blackfish’. After reporting a 28 percent drop in profit and a 5.2 percent drop in attendance, its Senior Marketing Officer is promising to “turn the parks inside out, so that guests can see all the good work we’re doing with animals in terms of rescue, rehabilitation, treatment, to promote a greater appreciation of the whole mission.” But will SeaWorld really turn the park inside out?

It’s unlikely. Force SeaWorld to Pay for Decimating the Southern Resident Orca Population. Let it be known, we are demanding that SeaWorld of Florida, LLC, pay reparations to the State of Washington for the death and destruction of the Southern Resident Orca population caused by the capture and removal of orcas, in order to fund expenses incurred by the State to restore the population to previous levels. Whereas reparations means to make amends, to repair, and to compensate, those who were wronged; We demand reparations on behalf of the descendants of the orcas killed and captured by SeaWorld. Whereas SeaWorld was built with and continues to enjoy the benefits of the captured orcas and their descendants; Whereas, between 1964 and 1976 hundreds of orcas were captured, of which 36 - 45 were taken into captivity and at least 11 were killed;