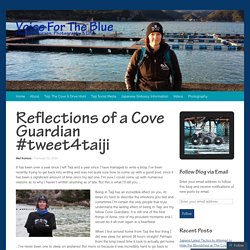 I’ve been recently trying to get back into writing and was not quite sure how to come up with a good post, since it has been a significant amount of time since my last one. Sign the Petition to Thomas Bach, International Olympic Committee & Japanese Olympic Committee · END Whale & Dolphin Hunts. Cove Guardians sur Twitter : "The Cove in Taiji runs red with blood. -太地町の入り江は血で赤く染まっている The entire pod of Striped dolphins has been murdered. 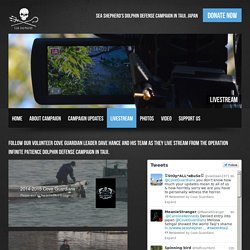 If there is a red button that says LIVE, please tune in as we are currently live streaming. If there is a blue button that says DVR, that means you are watching archived footage. If it says "Please wait for the broadcast to begin", that means we are currently not livestreaming. Please check out our website or Facebook page for news and alerts on our next live stream broadcast. To view our previous broadcasts from Taiji, visit our Livestream Archives Consider becoming a Cove Guardian and joining our team in Taiji. You will be sent an information packet that includes links to the Onshore Volunteer Application and a supplemental questionnaire for Cove Guardians.

You will submit that package either by electronic or physical mail. Sea Shepherd procureur dans les fichiers Japon grief officiel contre la police japonaise. December 16, 2014 The Formal Letter is the Beginning of Legal Action by Sea Shepherd to Protect the Rights of Volunteers on the Ground in Taiji to Document the Capture and Slaughter of Dolphins and Small Whales. 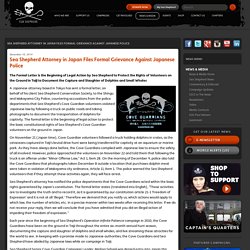 We Are All Melissa. Denial Occurs While Taiji’s Killers Rounded up and Slaughtered Pod of 50-60 Striped Dolphins, the First Striped Pod Killed This Season Sea Shepherd Conservation Society Senior Cove Guardian Leader Melissa Sehgal has been denied entry to Japan to document the brutal annual slaughter of dolphins in Taiji’s infamous cove. 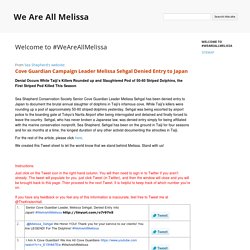 While Taiji’s killers were rounding up a pod of approximately 50-60 striped dolphins yesterday, Sehgal was being escorted by airport police to the boarding gate at Tokyo’s Narita Airport after being interrogated and detained and finally forced to leave the country. Sehgal, who has never broken a Japanese law, was denied entry simply for being affiliated with the marine conservation nonprofit, Sea Shepherd. Japan ‘Whale Festival’ Erupts In Bloody Dolphin Slaughter. The annual “Taiji Whale Festival” held on the first Sunday of November in Japan left a bloody stain on the infamous cove, as spectators watched. 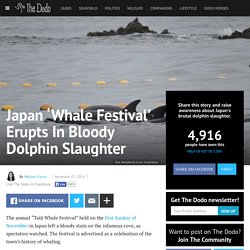 The festival is advertised as a celebration of the town’s history of whaling. A pod of 20-25 bottlenose dolphins was herded into nets in the cove on Sunday, reports activists from the Dolphin Project on site — the first bottlenose pod of the season, which has been in full swing for over 60 days now. While festival-goers gathered on the shore, the dolphins swam in their pens and activists documented the fray.

Taiji dolphin slaughter protest descends on West End. Speak for the silent: London Anti-Japanese Whale and dolphin hunting protest. The protest against Japan’s resuming of whale hunting in 2015 and dolphin training for amusement purpose broke out outside London Japanese embassy on 8th Nov. 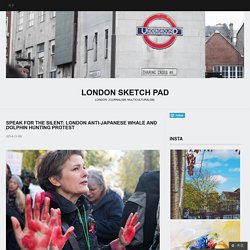 Hundreds of people gathered around in front of Japanese embassy from 11:00am to 5:00pm despite the cold weather. Those determined protesters came from different background, part were from dolphin project, some from sea shepherd, and most of them were voluntary animal lovers, traveling from all part of UK. The main subject of this project was to stop Japanese government’s resuming of whaling hunting for ‘scientific purpose’. Regardless of the condemn and pressure from UN’s international Court of Justice, which ordered Japan to give up commercial whaling, Japan’s Prime Minster clings to restart its project from January in 2015. (Angry protesters holding the photo of Japan Prime Minster, referring him as ‘Mr. Students Tackle Taiji Dolphin Drive - Yo Oceans! Redmond, Oregon High School Teaches “The Cove” With the 2014-2015 school year right around the corner Yo Oceans! 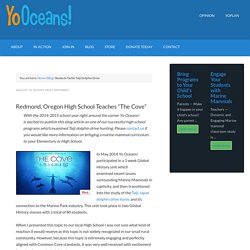 Is excited to publish this blog article on one of our successful high school programs which examined Taiji dolphin drive hunting. Please contact us if you would like more information on bringing a marine mammal curriculum to your Elementary or High School. Protesters aim for world's biggest animal rights demonstration against dolphin slaughter. Campaigners claim that up to 20,000 dolphins, whales and porpoises are killed each year in an annual tradition at the Taji Cove. 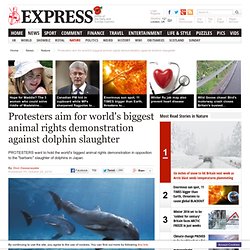 The hunts are conducted between March and September and this year the Japanese government allegedly authorised 16,000 sea creatures to be killed. Demonstrators will be gathering on November 7 outside the Japanese embassy in London to protest the "atrocious" tradition. The organisers said: "Some 20 000 dolphins, porpoises and small whales are slaughtered each year which occurs in Japan every year between September and March. "The Japanese government maintain that Taiji is part of a cultural tradition, and yet the evidence is clear that this is a commercially driven endeavour, with the animals ending up in captivity, on the food market, or simply left injured in the oceans to die. "This tradition has been going for as little as forty years. Protesters want dolphins to be afforded the same protection that whales receive across the globe. Activists Descend On Taiji To Prevent Japan’s Annual Dolphin Slaughter.

A year after the dolphin drive hunt in Taiji, Japan, killed some 800 dolphins and galvanized an international wave of criticism, hunters are once again setting out in motorboats in search of dolphin pods. 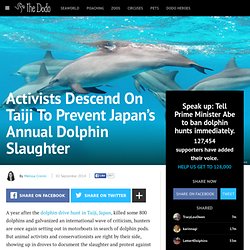 But animal activists and conservationists are right by their side, showing up in droves to document the slaughter and protest against it. Activist and former dolphin trainer Ric O’Barry arrived last week to a petition against the World Association of Zoos and Aquariums (WAZA) for not taking action against the slaughter, and to call on the U.S. Embassy to do something as well. He was joined this week by members of his organization, the Dolphin Project, as well as members of the Sea Shepherd Conservation Society’s Cove Guardians, who have been vigilant in years past about livestreaming and live-tweeting the carnage in the cove. 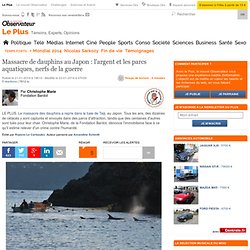 “We would like Ambassador Kennedy to come and visit to see the hunt for herself.” Kai said fishermen in Taiji switched more than 10 years ago to a method that uses a 30-centimeter pick to kill them almost instantaneously. In her tweet on Jan. 18, Kennedy lambasted the herding and killing of the dolphins by local fisherman, saying, “Deeply concerned by inhumaneness of drive hunt dolphin killing. WAZA Can Save Angel and End Dolphin Hunts in Taiji. This past weekend, a very large pod of bottlenose dolphins were captured and herded into the Cove in Taiji, Japan. These horrible dolphin hunts were revealed to the world (including most Japanese) by the Academy Award-winning documentary, The Cove. One of these dolphins is a small calf that we have named Angel. Angel is completely white with pink eyes, a true albino, and was herded into the Cove with its mother.