O-Koto Culture of Japan. The Japanese harp, or O-koto, is one of a series of Japanese classical instruments that, along with the appropriate musical scales, give Japanese music and culture its distinctive sound. 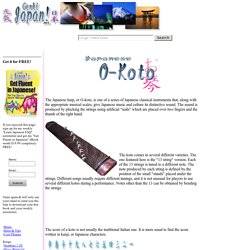 The sound is produced by plucking the strings using artificial "nails" which are placed over two fingers and the thumb of the right hand. The koto comes in several different varieties. The one featured here is the "13 string" version. Each of the 13 strings is tuned to a different note. The note produced by each string is defined by the position of the small "stands" placed under the strings. Japan map. SizeComparison Japan US 670. KSzectF. Kiku last (1) Chrysanthemum seal. x1920 Cherry Blossom Lake Sakura Japan. The Amazing And True Story Of Hachiko The Dog.

Have you ever heard of Hachiko the dog? 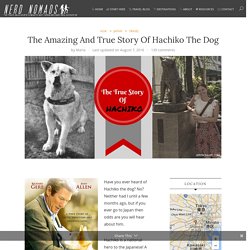 No? Neither had I until a few months ago, but if you ever go to Japan then odds are you will hear about him. Hachiko is a national hero to the Japanese! A dog so famous there have been several movies made about him. He has his own statue next to Shibuya Train Station in Tokyo, where every day hundreds of people have their photograph taken with him. Famous Japanese People. Interesting Japan Facts for Kids Here are some interesting Japan Facts which were chosen and researched by kids especially for kids. 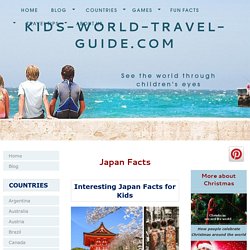 Population: 127 million people live in Japan (2016)Capital: Tokyo, which is the biggest city in Japan with over 9 million inhabitants. Name: Japan, in Japanese: Nihon/NipponGovernment: Constitutional Monarchy. The emperor is called AkihitoLanguage: JapaneseReligion: majority are Buddhists or ShintoistsLife expectancy: 83.5 yearsCurrency: 1 Yen (NOK)=100 oreNational Symbols: crane - birds, cherry blossom -flowersNational Day: 17 May (Constitution Day) Kids Web Japan. Japan for Kids. We are just making a start with our Japan colouring pages, but we hope you enjoy what we have here. 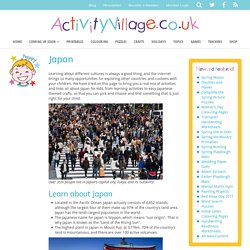 The Japanese flag has a simple design of a white background with a large red circle in the centre... The more we explored the internet, the more we found to be fascinated by about Japanese traditions... Here you will find instructions for three traditional Japanese origami models, written simply with... "I will write "peace" on your wings, and you will fly all over the world".... Explore our collection of Japanese themed crafts, including the very popular zen garden craft which... For Beginners: The Alphabet of Japanese Or Learning Japanese Characters. Hello Junkie! 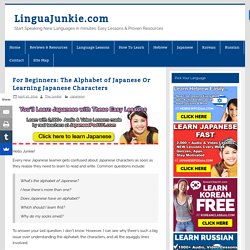 Every new Japanese learner gets confused about Japanese characters as soon as they realize they need to learn to read and write. Common questions include: What’s the alphabet of Japanese? I hear there’s more than one? Does Japanese have an alphabet? Inside Japan Tours. Fun Japan Facts for Kids - Interesting Information about Japan. The Japanese name for Japan is “Nihon” or “Nippon” which means “sun origin”. 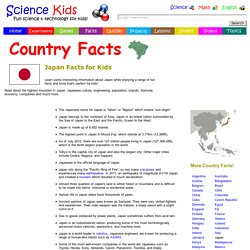 Japan belongs to the continent of Asia. Japan is an island nation surrounded by the Sea of Japan to the East and the Pacific Ocean to the West. Japan Crafts and Activities for Kids. Extra info! 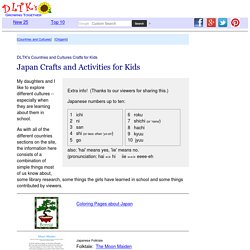 (Thanks to our viewers for sharing this.) Japanese numbers up to ten: 1 ichi2 ni3 san4 shi (or less often 'yo-on')5 go 6 roku7 shichi (or 'nana')8 hachi9 kyuu10 jyuu also: 'hai' means yes, 'iie' means no. 25 Activities for Kids in Japan. Japan » guide » japan for kids posted by John Spacey, May 23, 2015 Japan is an appealing country for travel with kids offering urban wonders, nature, cultural activities, entertainment venues and leisure facilities for families.The following are activities that local families might include on a day trip or vacation. 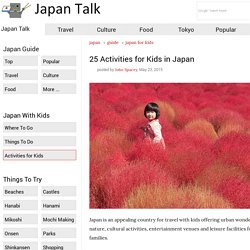 Japan is fond of theme parks with hundreds of parks big and small dotting the country. The biggest parks include familiar names such as Disneyland and Universal Studios and Japanese originals such as Fuji-Q Highland.