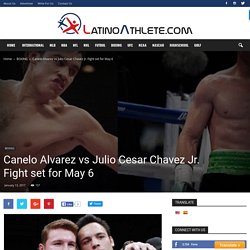 The official announcement came today (Friday Jan. 13, 2017). Read more on the biggest fight of 2017…Canelo Alvarez vs Julio Cesar Chavez Jr. . … Ronaldo Souza Weighs In on ‘Chicken’ Luke Rockhold - Latino Athlete. Find out why Ronaldo Souza is saying that Demi Lovato’s ex-Luke Rockhold “Chickened Out” on a rematch… Ronaldo Souza and Luke had a fight last year but needed to reschedule, but Rockhold has accepted a new date for their postponed rematch! 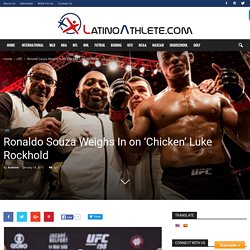 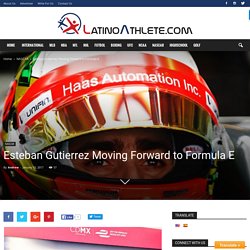 The confirmation move came during the Brazilian Grand Prix race weekend in November. Gutierrez was left with minimal options for 2017 since Manor and Sauber were the only choices. Especially, after Marcus Ericsson was confirmed at Sauber and Pascal Wehrlein set to replace Felipe Nasr in the second seat. Bills Moving Kiko Alonso To OLB. Word is, the Dolphins want to move Kiko Alonso position to an outside (weakside) position to address some of the team’s LB flaws. 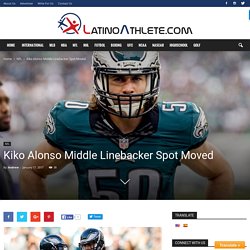 Read more on Kiko Alonso… Sources say, The Dolphins didn’t want to “mess with Kiko’s head” three months into the season by asking him to move. Forcing Junior Dos out of The UFC Fight Night 105. The former heavyweight champion Junior Dos Santos, world was thrust into chaos after Stefan Struve injured his shoulder, forcing him out of the UFC Fight Night 105. 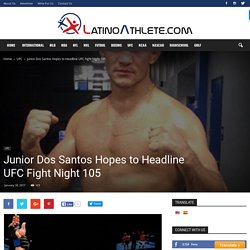 Santos vs Struve was the main event, but now it appears the fight may not be happening at Scotiabank Centre in Halifax, Nova Scotia, Canada on Feb. 19. Read more and find out what Junior Dos Santos has to say… Although, Junior Dos Santos remains optimistic that he will still be fighting at UFC Fight Night 105. Dos Santos told MMAjunkie: Why Nate Diaz wants a Professional Boxing License? Find out why Nate Diaz wants a professional boxing license in Nevada… Nate Diaz is looking toward the future, and his future evolves boxing in the ring, not in the McGregor and Diaz fought twice in 2016. 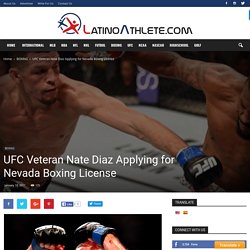 Diaz submitted McGregor in March, before suffering a five-round majority-decision loss in the rematch. After news of his choice to cross over to boxing, NSAC executive director Bob Bennett confirmed the news. MLB Rumors: Jose Bautista, Blue Jays Nearing Two-Year Contract Worth $35M To $40M. Read more about Jose Bautista remaining in Toronto with the Blue Jays… On Wednesday, Toronto officially signed Bautista to a one-year deal worth $18 million. 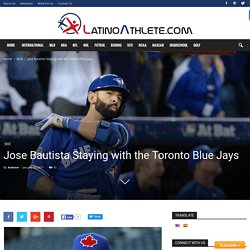 Jose’s Jose Bautista is coming back to the Blue Jays for at least one more year. contract includes a $17 million option for 2018 and a $20 million vesting option for ’19. And get this, Bautista will receive a $500,000 buyout if he declines to exercise the option for 2018. Veteran midfielder hobbled out of previous session with knee injury. Read more and find out what is going on with German club Bayern Munich central midfielder Xabi Alonso… Reports have surfaced that Bayern Munich’s Xabi Alonso is planning to retire at the end of the season next page. 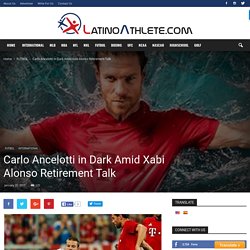 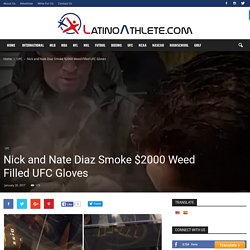 The weed filled blunt was in the shape of UFC fight gloves. Hull confirm Ryan Mason is conscious and Speaking to Club Officials in Hospital. Read more on Ryan Mason, who was injured during a Jan. 22 Premier League loss against Chelsea… LatinoAhtlete.com has learned that Ryan Mason, 25, had a head-on collision with Gary Cahill during the 2-0 defeat. 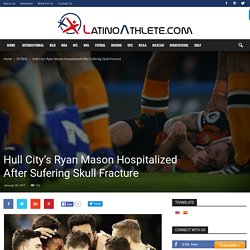 Mason was notably injured and rushed off the field to the hospital. He was diagnosis with a skull fracture. UFC President Dana White Says Tito Ortiz Fight NOT Fixed. Don’t count on that, per UFC president Dana White… LatinoAthlete.com has learned that Dana White is shutting down the accusations that Tito Ortiz vs Chael Sonnen was NOT a fixed fight. The two MMA fighters fought in out, ending with Chael Sonnen being choked out just two minutes into their main event battle. UFC Fight Night Event in Halifax That Takes Place on Sunday Night. Read more on Gente Boa aka Santiago Ponzinibbio… Per LatinoAthlete.com, Santiago Ponzinibbio currently is not ranking in the 15 UFC welterweight fighters. But the Gente Boa plans to change that in 2017. He plans to take the first step during an UFC Fight Night event in Halifax that takes place on Sunday night (Feb. 19). He plans to take his first step on the ladder by taking on Nordine Taleb this the event. The welterweight Ultimate Fighting Championship told Bloody Elbow that he plans to make his way to the 170-pound rankings:

Career Years, comebacks Highlight Dodgers' clutch '16. Read more and see why Franklin Gutierrez is getting a second chance in the MLB… Lucky for Franklin Gutierrez, the Dodgers have room in their crowded outfield for him to play ball after suffering several aliments. It was not one issue for Franklin Gutierrez, no, he suffered from stomach gastritis. Then a strained left oblique, and a torn right pectoral. Nate Diaz should Be Smiling After one of Conor McGregor's former Foes Issues challenge. Read why The Diamond aka Dustin Poirier has set his target on Nate Diaz… He also finished over Yancy Medeiros and Bobby Green, and Josph Duffy. But Dustin Poirier hit a road block fighting Michael Johnson who crushed his four-fight streak in the UFC. LatinoAthlete.com has learned that Dustin Poirier made an impressive comeback at UFC 208, but Jim Miller annihilated The Diamond’s leg.

The Grim List of Football Players with CTE Continues to Grow. Read more on the latest discovery of CTE and dementia for Futbol players deaths… LatinoAthlete.com has learned that soccer players now run a risk of CTE and dementia due to repeated heading of the soccer ball. Per a case study the average player heads the ball between six and 12 times per game. That is 2,000 headers during a 20-year career, not counting practice. The Link to Futbol Players Deaths: Jeff Astle cause of death has forced the UK soccer and MLS organization to take a closer look at the risk their players face. Match Thread:Cruz Azul vs America. Giants' Victor Cruz, Justin Pugh suffer Injuries in victory. UFC Featherweight Kingpin Jose Aldo Blasts. Maidana overpowers Broner to Stun world champion with devastating Display in Texas. Robinson Cano Finalizes Deal. Major League Baseball and MTV Announced a Multi-Year Partnership.

Miguel Cotto vs. Delvin Rodriguez. Sept. 20 Exhibition Game Against The Anaheim Ducks. Canada Held by Puerto Rico in World Cup Qualifying. The Dominicans won and Got into The 2014 FIBA Basketball World Cup. Dubai on The Killing of IUCN Red List Animal. Rafael Nadal short of confidence But He can Reclaim No.1 Ranking says New coach Carlos Moya. Cristiano Ronaldo’s Legacy Facing The same Demand of a Major International Title that crushed Lionel Messi.

Texas Tech’s Jace Amaro Now in Running for 2 Major Awards. LatinoAthlete.com is your source for Latino Sports. THE JBR - Signature Move. Today was One of Those Glorious Days. VIDEO: Dramatic Moments of the Week: 5/26-6/1. Josh Huff Arrested: Eagles Wide Receiver Charged With Marijuana & Gun Possession. Daniel Suarez Became the No. 19 Cup Series Racer. The Bryants Also Posed for Pics with Some of The Biggest Stars in The Sport. The Disabled List for The First Time in His career. Patriots fans taunt Roger Goodell as AFC Championship Game Gets out of Hand.