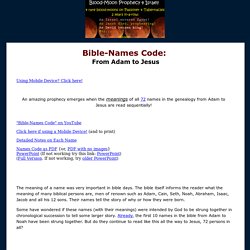 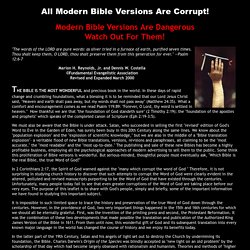 Reynolds, Jr. and Dennis W. Costella ©Fundamental Evangelistic Association Revised and Expanded March 2000 THE BIBLE IS THE MOST WONDERFUL and precious book in the world. In these days of rapid change and crumbling foundations, what a blessing it is to be reminded that our Lord Jesus Christ said, "Heaven and earth shall pass away, but my words shall not pass away" (Matthew 24:35). What a comfort and encouragement comes as we read Psalm 119:89: "Forever, O Lord, thy word is settled in heaven. " Bible versions and the preeminence of Christ. Jesus Folk. BIBLE VERSES. Missing Bible Verses, missing from common beliefs, free download page. Table of Contents. Table of Contents Updated 7/13/15 "In these days of neutrality and compromise and apostasy, this is not a time for the change of vision, message, standard, or principle. 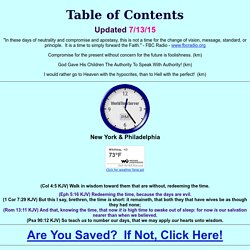 It is a time to simply forward the Faith. " - FBC Radio - www.fbcradio.org. Genesis contradictions? - creation.com. Editor’s note: As Creation magazine has been continuously published since 1978, we are publishing some of the articles from the archives for historical interest, such as this. 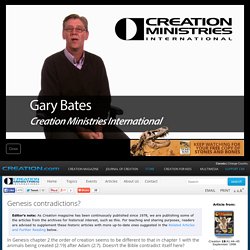 For teaching and sharing purposes, readers are advised to supplement these historic articles with more up-to-date ones suggested in the Related Articles and Further Reading below. by Don Batten NASA’s Earth Observatory/NOAA/DOD. King James Bible Statistics. King James Bible Statistics By Nic Kizziah This article is © Copyrighted by Theological Research, a department of The Believers Organization. 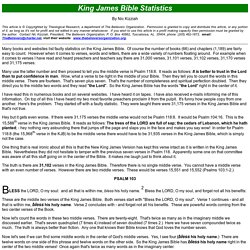 Bible Maps. Bible Maps - Biblical Maps and Historical Geography for Bible Study (Printing Instructions: Open the map, right click and print) About Bible Maps Maps are essential for any serious Bible study, they help students of the Scriptures understand the geographical locations and historical backgrounds of the places mentioned in the Bible. 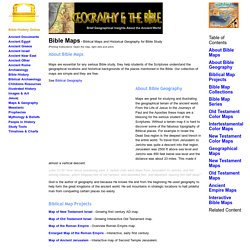 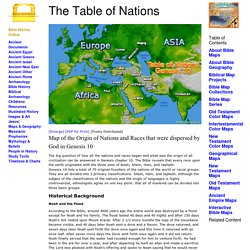 The Bible reveals that every race upon the earth originated with the three sons of Noah; Shem, Ham, and Japheth. Genesis 10 lists a total of 70 original founders of the nations of the world or racial groups. They are all divided into 3 primary classifications: Shem, Ham, and Japheth. Historical Background. Ancient Lands and Their Current Names. Supposed Bible Contradictions: Scripture Index. Biblical Errors Mistakes Difficulties Discrepancies Countered. Originally By: Andrew Tong, Michael J. 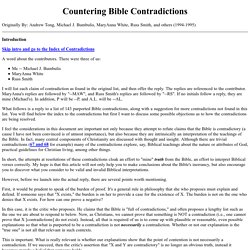 Bumbulis, MaryAnna White, Russ Smith, and others (1994-1995) Introduction. 1001 bible contradictions. SAB Contradictions. KJV 1611 Yahoo Group Posts. (2 Cor. 2:11 KJV) Lest Satan should get an advantage of us: for we are not ignorant of his devices. 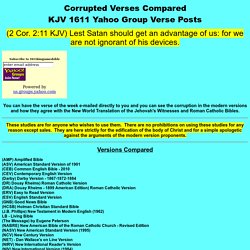 You can have the verse of the week e-mailed directly to you and you can see the corruption in the modern versions and how they agree with the New World Translation of the Jehovah's Witnesses and Roman Catholic Bibles. These studies are for anyone who wishes to use them. There are no prohibitions on using these studies for any reason except sales. Table of Contents. BibleStructureAndTimeline.pdf. BibleStructureAndTimeline.pdf. 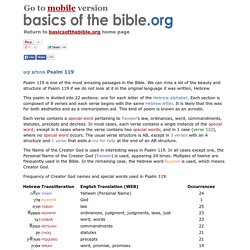 Question: "What do LORD, GOD, Lord, God, etc., stand for in the Bible? Why are they used in place of God's name? " Answer: It can be very confusing to understand how the different titles used for God are used in the Bible. Part of the problem is that different Bible translations use the terms somewhat differently. The primary reason for the use of LORD in place of God's Hebrew name is to follow the tradition of the Israelites in not pronouncing or spelling out God's name. So, when God's Hebrew name "YHWH" is used in the Old Testament, English translations usually use "LORD" in all caps or small caps. As stated above, when "LORD" in all caps or small caps occurs in the Old Testament, it is a replacement for an occurrence of God's Hebrew name "YHWH," also known as the Tetragrammaton. Torah Videos on Torah Anytime. Persecution News of Churches Persecuted & Christian Sufferings.

“I Am Not Afraid of You…” One Eritrean Christian’s Story of Torture and Triumph by Faith Imprisoned for Christ. By Troy Augustine 6/12/15 Washington D.C. (International Christian Concern) - For three days, “Yohan’s” joints throbbed as the muscles in his arms and legs had stretched in directions human limbs are not intended to bend. His stomach was empty, except for the scraps that fell from the table of his captors after they had eaten their fill. The Neglected Suicide Epidemic - The New Yorker. Samaritans Suicide Statistics Report 2014. U.S. Suicides Hit Highest Rate in 25 Years. Americans' life expectancy rates are at a record high, but suicide rates are on the rise, according to a Centers for Disease Control and Prevention report released on Wednesday.

The study, which looked at 2012 U.S. mortality data, found Americans are expected to live longer than ever: life expectancy from birth reached 78.8 years, a .01 increase from the previous year. As was the case in 2011, women were expected to live longer than men by 4.8 years. 23-Harmony-Of-The-Four-Gospels.pdf. Wtree - Organize your web. Legionnaire 1998 Full Movie. Godinterest. CloudBacko - Free secure cloud backup with unlimited storage for everyone. The End Time. End of the World: Pictures, Videos, Breaking News. End Time News - Current Signs in the Middle East.

Friends, Satan is doing his very best to suppress the truth because he knows the Bible, and he knows Bible prophecy. Satan is full aware that the truth is the most powerful weapon to use against him and his deceptions. Which is why he is doing all he can to keep the people entertained, so that they cannot see what is right in front of them. WARNING: An innumerable host of evil angels are spreading over the earth. They are not only crowding government institutions, but also the churches. When we seek and learn the truth and then live according to it, the enemy's deceptions become useless, because we then come under the Spirit and power of God, which Satan CANNOT penetrate. End Times Daily - End Times Prophecies, News and Information. Emergency Survival Preparedness.

Bible Chronology Timeline - The Mysteries of God. Chronologies of the Mysteries of God. Page 1 It is extremely important that this important note be read first before assuming information on this second document on this site by Marcos A. Escobar (pages 2-1 to 2-14) is totally accurate. The Flat Earth Society. Our new website includes the Flat Earth Society forums (a thriving online community since 2004) as well as a number of new features including: The Flat Earth Society Library - This online library contains a growing selection of Flat Earth resources. Bible Study Resources and Strong's Concordance with Hebrew and Greek Lexicon. Secret Rapture Truth - Bible Prophecy. Bible Cross References. About 340,000 cross references identify commonalities between different parts of the Bible—chains of similar themes, words, events, or people. Bible Scriptures by Subjects (KJV) Main Index.

Bible Timeline with Numerical Code. Complete Bible Genealogy - Jesus family tree - Kings of Judah and Israel. Latest Earthquakes in europe. Timeline of the Bible. The Patriarchs God commanded Abraham to leave his homeland and go to a land God would show him. God promised to bless Abraham, make him a great nation, and give land to his descendants. Genesis 12. Slaves in Egypt Joseph, one of Israel's 12 sons, was sold into slavery by his jealous brothers. Messianic Prophecies in the Old Testament Fulfilled by Yeshua. Matt 24:37 Cross References (9 Verses) SAB, Contradictions. Jesus Folk. Islam: Making a True Difference in the World - One Body at a Time. Open Doors International. Open Doors USA. 20+ Tools to Create Your Own Infographics. Periodic Table Creation in the Bible. CARM - Christian Apologetics and Research Ministry.