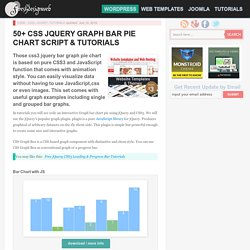 We will use the jQuery’s popular graph plugin. plugin is a pure JavaScript library for jQuery. NOVOSHORE. Luxury Hotels Dubrovnik - Adriatic Luxury Hotels. 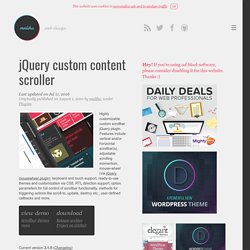 Highly customizable custom scrollbar jQuery plugin. Features include vertical and/or horizontal scrollbar(s), adjustable scrolling momentum, mouse-wheel (via jQuery mousewheel plugin), keyboard and touch support, ready-to-use themes and customization via CSS, RTL direction support, option parameters for full control of scrollbar functionality, methods for triggering actions like scroll-to, update, destroy etc., user-defined callbacks and more. Current version 3.1.5 (Changelog)Upgrading from version 2 When upgrading from version 2.x to 3.x it’s important to use version 3 CSS and .png files. Version 3 is backwards compatible but it’s also a huge overhaul. Version 2 is still maintained and updated here. How to use it Get started by downloading the archive which contains the plugin files (and a large amount of HTML demos and examples). 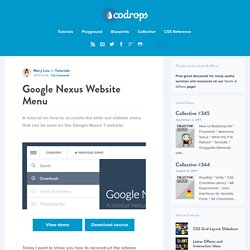 View demo Download source Today I want to show you how to reconstruct the sidebar menu of the Google Nexus 7 page. It slides out with a really nice effect where some subitems get expanded as well. When hovering over a special menu icon, the sidebar icons will be revealed. When clicking on the icon, the whole sidebar menu will be shown.

Orange Box - Made with attention to detail. Mejorandola. DASHBOARDS. BOOTSTRAP resources. MENU. Premium & Free Design and Web Resources. Freebies: 10 Mobile App Mock Up PSDs + 10 Wireframing Tools. EmailShare 8EmailShare The advent of smartphone and it’s impact is now not unknown to anyone of us. All are well aware how significant a smartphone and mobile apps are in today’s fast emerging tech savvy world.

In order to facilitate the swelling number of app developers we have collected very useful freebies and presenting it in a bundle so that our designers and developers friends may use both mobile app mock up PSDs and free wireframing tools at one place. Normally, blogs don’t bother to combine these two similar kind of freebies in bundle but we thought to be more useful and save the time by allowing designers and developers get benefit from one post. We are sure that after the launch of iOS 7 all designers and developers much be rushing to follow new application building required for new iOS. So, our freebies involve mobile app mock ups PSDs that can be helpful for latest iOS7. Recommended Link: 35+ Latest Design & Development Freebies Resource List.

Best Free PSDs of 2013. We started our “Best of 2013″ series with the Best Free Fonts of 2013. For this week, we’ve went back through all the UI PSDs that we’ve covered over the past year and picked the ones that really stand out. Because there are so many very good ones to sift through, it’s always a difficult choice, but here are the ones we think are the best of the best. iGravertical Screen Layers + iOS 7 Screen Converter (PSD) 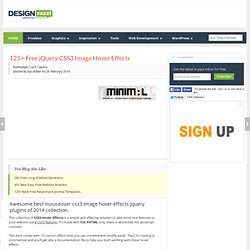 It’s made with CSS XHTML only, there is absolutely NO javascript tutorials. This item comes with 75 custom effects that you can combine and modify easily. The CSS markup is commented and you’ll get also a documentation file to help you start working with these hover effects. jQuery Slideshow Tip Cards Free Hover Effect Modern browsers such as Chrome, Firefox, and Safari on desktop have been tested. Animation CSS3 3D Grid jQuery Hover Effect It’s the recreation of an effect we spotted inthis fantastic prototype app by Marcus Eckert. Personnel Availability. Right Now. WEB_UI. TAP - Fireworks touch prototype tool for iPhone, iPad - UNITiD. This tutorial shows you how to use our method to make your Fireworks prototype work for the Apple iPhone and iPad. 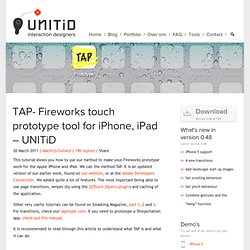 We call the method TAP. It is an updated version of our earlier work, found on our website, or at the Adobe Developers Connection. We added quite a lot of features. The most important being able to use page transitions, swipes (by using the jQTouch jQuery plugin) and caching of the application.