Get the top and most funded kickstarter crowdfunding projects we love. A novel - Amazing characters around the world by Lars Hellmont. The project novel follows 3 main characters in locations of Stockholm, Guam, Lapland, Italian Ponza Island, Hong Kong and Micronesia.

Lars Hellmont: First-time Author, All-time Achiever. One of Kickstarter's new projects, which has gained quite a lot of attention lately, is a thrilling novel by the first time author, Lars Hellmont. 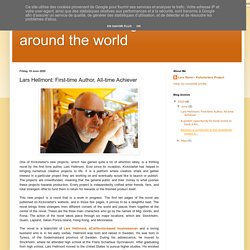 Ever since its inception, Kickstarter has helped in bringing numerous creative projects to life. It is a platform where creators share and gather interest in a particular project they are working on and eventually would like to launch or publish. The projects are crowdfunded, meaning that the general public and their money is what pushes these projects towards production. Every project is independently crafted while friends, fans, and total strangers offer to fund them in return for rewards or the finished product itself.

Lars Hellmont: From A Businessman to An Author - Lars Hellmont - Medium. In his mid-fifties, Lars Hellmont, a Texas based businessman and investor, for the first time has set foot into the sphere of writing. 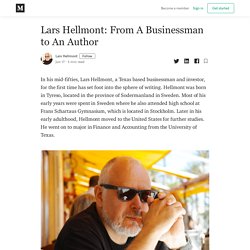 Hellmont was born in Tyreso, located in the province of Sodermanland in Sweden. Most of his early years were spent in Sweden where he also attended high school at Frans Schartaus Gymnasium, which is located in Stockholm. Later in his early adulthood, Hellmont moved to the United States for further studies. He went on to major in Finance and Accounting from the University of Texas. This is Lars Hellmont’s first attempt at trying his hand at authorship and he has come up with the mind-boggling idea of a novel which features an ensemble of characters and where the actions take place in multiple locations throughout the continents of Europe, Asia and Oceania.

Lars Hellmont probably came up with this striking idea as he himself is well travelled. An opportunity to back one of the most popular Kickstarter Projects. Are you a passionate backer of Kickstarter Projects looking for a promising and rewarding project? 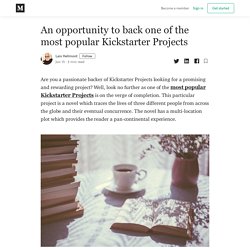 Well, look no further as one of the most popular Kickstarter Projects is on the verge of completion. This particular project is a novel which traces the lives of three different people from across the globe and their eventual concurrence. The novel has a multi-location plot which provides the reader a pan-continental experience. The first character is that of Mig’s who is posted in the island of Guam as an underwater cable expert. Amidst all the corporate snafu of his employers, Mig is exposed to the calamities caused by the infamous brown tree snakes and concrete eating termites of Guam.

A golden opportunity for book lovers to back a Kickstarter Project. Book lovers around the world, Kickstarter provides you the opportunity to invest in one of it’s upcoming crowdfunded project which happens to be the unique story of three strangers brought together by fate wrapped in the form of a novel. 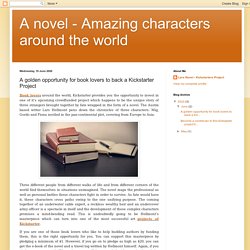 The Austin based writer Lars Hellmont pens down the chronicles of three characters: Mig, Gordo and Fiona nestled in the pan-continental plot, covering from Europe to Asia. Three different people from different walks of life and from different corners of the world find themselves in situations unimagined. The novel maps the professional as well as personal battles these characters fight in order to survive.

As fate would have it, these characters cross paths owing to the one unifying purpose. An excellent investment opportunity for any book lover. Do you love reading thrilling stories? 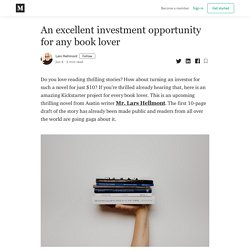 How about turning an investor for such a novel for just $10? If you’re thrilled already hearing that, here is an amazing Kickstarter project for every book lover. Here comes another reward based crowdfunding project. Are you ready to become a smart investor? 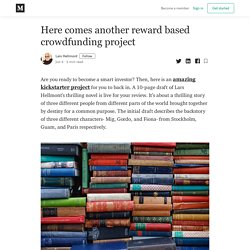 Then, here is an amazing kickstarter project for you to back in. A 10-page draft of Lars Hellmont’s thrilling novel is live for your review. It’s about a thrilling story of three different people from different parts of the world brought together by destiny for a common purpose. The initial draft describes the backstory of three different characters- Mig, Gordo, and Fiona- from Stockholm, Guam, and Paris respectively. Long story short, Mig is Austin-born underwater cable expert, Gordo is a smart investor looking for an opportunity in Paris Watch Market and Fiona serves Swedish military in handling classified cross-border operations. Lars is full ready to take his readers by surprise but at the moment, he needs quality supporters to take his concentration from budget-setbacks to quality writing.

Become a contributor to this Kickstarter project before it gets too late. Here comes another entry to Kickstarter projects we love- an amazing novel of three intense characters and their journey towards a common goal without their consciousness. 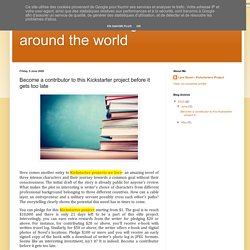 The initial draft of the story is already public for anyone’s review. What makes the plot so interesting is writer’s choice of characters from different professional background belonging to three different countries. How can a cable layer, an entrepreneur and a military servant possibly cross each other’s paths? The storytelling clearly shows the potential this novel has in times to come. You can pledge for this Kickstarter project starting from $1. Lars’ novel is one of those Kickstarter projects we love. Amazing Kickstarter Novel of three different people. Do you like mind bending novels? 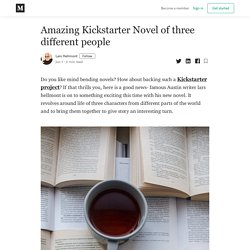 How about backing such a Kickstarter project? If that thrills you, here is a good news- famous Austin writer lars hellmont is on to something exciting this time with his new novel. It revolves around life of three characters from different parts of the world and to bring them together to give story an interesting turn. Three main characters of the story are Mig, Gordo and Fiona from three different parts of the world, Stockholm, Guam, and Paris. Their lifestyle is different and so are their professions. A novel - Amazing characters around the world: A lucrative Kickstarter project to back in by Lars Hellmont. Are you looking for smart Crowdfunding projects having potential to gift a good ROI in near future? 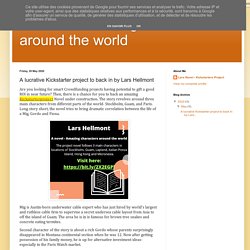 Then, there is a chance for you to back an amazing Kickstarterproject Novel under construction. The story revolves around three main characters from different parts of the world- Stockholm, Guam, and Paris. Long story short, the novel tries to bring dramatic correlation between the life of a Mig, Gordo and Fiona. Mig is Austin-born underwater cable expert who has just hired by world’s largest and ruthless cable firm to supervise a secret undersea cable layout from Asia to off the island of Guam. The area he is in is famous for brown tree snakes and concrete eating termites. Second character of the story is about a rich Gordo whose parents surprisingly disappeared in Montana continental section when he was 12. Lastly, there is a Swedish girl named Josefine, mostly called Fiona, who serves Swedish military in handling classified cross-border operations.

A novel - Amazing characters around the world by lars hellmont.