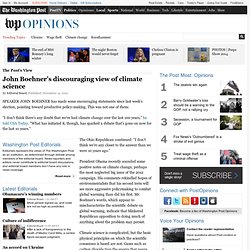 What Is Equity in the Context of Climate Negotiations? This post was co-authored with Wendi Bevins, an intern with WRI’s Climate and Energy Program. 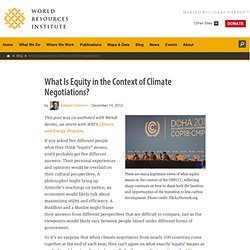 If you asked five different people what they think “equity” means, you’d probably get five different answers. Their personal experiences and opinions would be overlaid on their cultural perspectives. A philosopher might bring up Aristotle’s teachings on justice; an economist would likely talk about maximizing utility and efficiency. A Buddhist and a Muslim might frame their answers from different perspectives that are difficult to compare, just as the viewpoints would likely vary between people raised under different forms of government.

Without Congress, There’s Still a Path to U.S. Progress on Climate by John Carey. 10 Dec 2012: Analysis by john carey When Barack Obama won his first term as president in 2008, expectations were high that the United States would finally tackle the threat of climate change. In fact, the administration quickly raised fuel economy standards for cars and light trucks, and the House of Representatives passed a sweeping bill that would have imposed economy-wide caps on greenhouse emissions and set targets for future reductions. But the legislation died. House Republicans Voted Against The Environment More Than 300 Times Since 2011. By Rebecca Leber on September 14, 2012 at 2:49 pm "House Republicans Voted Against The Environment More Than 300 Times Since 2011" The House of Representatives added to its historic tally of anti-environment votes with a 245 to 161 vote on Friday approving the GOP’s “No More Solyndras Act” — a messaging bill that hampers Department of Energy loan guarantees to clean energy projects. 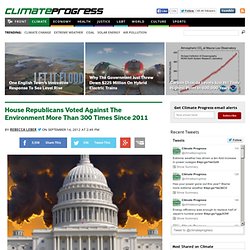 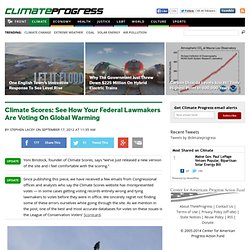 Since publishing this piece, we have received a few emails from Congressional offices and analysts who say the Climate Scores website has misrepresented votes — in some cases getting voting records entirely wrong and tying lawmakers to votes before they were in office. Photos du journal. Brendan Smith: Fighting Doom: The New Politics of Climate Change. I am not an environmentalist. 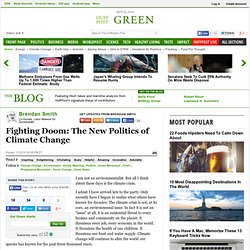 But all I think about these days is the climate crisis. I admit I have arrived late to the party. Only recently have I begun to realize what others have known for decades: The climate crisis is not, at its core, an environmental issue. In fact it is not an "issue" at all; it is an existential threat to every human and community on the planet. It threatens every job, every economy in the world. As an oyster farmer and longtime political activist, the effects of climate change on my life will be neither distant nor impersonal.

But my political alter ego is oddly less pessimistic. The Power of Doom The modern progressive movement in the U.S. has traditionally grounded its organizing in the politics of identity and altruism. The highlights of my political life -- as opposed to oystering -- have been marked by winning narrow, often temporary, battles, but perennially losing the larger war. This time can be different. Let me use a personal example. Agencies Urged to Plan for `Inevitable Effects' of Warming in U.S. Report. The Obama administration, which has been unable to push climate-change legislation through Congress, is urging government agencies to prepare for the “inevitable effects” of global warming. 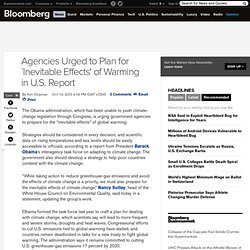 Strategies should be considered in every decision, and scientific data on rising temperatures and sea levels should be easily accessible to officials, according to a report from President Barack Obama’s interagency task force on adapting to climate change. The government also should develop a strategy to help poor countries contend with the climate change. The Politics of Climate Change - O'Dwyer's Magazine, February 2010. Many of the same U.S. corporations touting popular “green” initiatives are simultaneously funding anti-climate trade groups to sway public opinion and lobbyists to push polluter-friendly legislation. 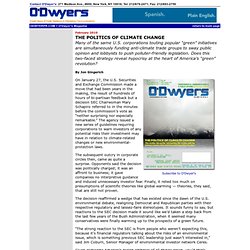 Does this two-faced strategy reveal hypocrisy at the heart of America’s “green” revolution? By Jon Gingerich On January 27, the U.S. Securities and Exchange Commission made a move that had been years in the making, the result of hundreds of hours of bi-partisan feedback but a decision SEC Chairwoman Mary Schapiro referred to in the minutes before the commission’s vote as “neither surprising nor especially remarkable.” The agency issued a new series of guidelines requiring corporations to warn investors of any potential risks their investment may have in relation to climate-related changes or new environmental-protection laws. The subsequent outcry in corporate circles then, came as quite a surprise. “Their mantra has always been ‘just tell us what to do.’